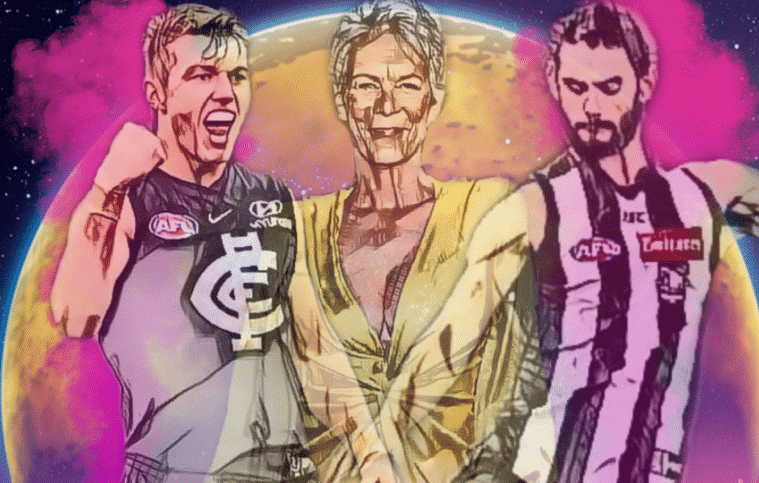 It’s the final round of the home and away season of the 2027 AFL Home and Away season.

This scenario was only made possible by the new Federal Government, headed by the Asian lesbian cyborg robot that Pauline Hanson warned us about (https://www.theage.com.au/culture/theatre/meet-australia-s-2050-president-and-pauline-hanson-s-worst-nightmare-20200312-p549ik.html)  – having taken power 23 years early, she was able to get our vaccine rollout to over the magical 70% mark, allowing games to continue in front of live crowds, after a rough few years playing games exclusively to no crowds in Harvey Norman showrooms and the Gold Coast.… They had no restrictions per se, just nobody on the Gold Coast cares about the AFL, nor have they ever.

It also commemorates the expiry of two of the lengthier, most lucrative deals in the AFL, that of Patrick Cripps and Brodie Grundy. As this is a gritty, dystopian futuristic fantasy, I envisage one is forced to play whilst wearing an eyepatch, and the other has some steampunk get-up over their matchwear. Both are older, wiser, greyer. Some lost loves along the way. Heartbreak, triumph, adversity, bitterness, resentment, the learnings of life’s lessons. One of them might adopt a cat along the way and credit a mid-season run of good form to its influence.

Along the way though, there is no premiership medallion for either. There are a few near-misses along the way, some what-ifs debated to death by virtual-pub discussion, a couple of sliding doors moments (Grundy rates this as Gwenyth Paltrow’s best film, well ahead of Iron Man 3, whilst Cripps enthusiastically engages via Instagram with both Sorel and Klaus from Aqua, who wrote the soundtrack for the 1998 hit film).

Passing each other in the MCG car park after a pointless end to another home and away season, they stop to lament their similar misfortunes, which leads to the same predictable conclusion of every private conversation between footballers. Whipping it out and comparing sizes.

Grundy getting $7 million over 7 years, Cripps a shade less, estimated at $5.1 million over 6 years, they stop counting after his butler (the reanimated corpse of Lou Richards) cannot count any further and both get a little concerned for their wellbeing, knowing what could happen should Marc Murphy get a whiff of the smell of fresh banknotes.

Both finding refuge in each other’s similar misery is quickly disrupted by a loud cough from behind a pillar in the car park, designed to attract their attention. The shadowy figure emerges from the other shadows of the shadowy car park of shadows, and removes their Dick Tracey-esque fedora and pulling down the high collar of their trenchcoat. It’s not a men’s rights activist, but rather, inexplicably, Jamie-Lee Curtis.

“Jamie-Lee Curtis? In these times of international travel bans? But you aren’t a contributor to Sky News, nor a member of the Hillsong Church. How did you get a travel exemption? And what are you doing here? Overseas celebrities only turn up to be awkwardly presented with a jumper and then fuck up a basic handball. But you stayed past quarter time?”

We fast forward through a 45-minute conversation explaining the Freaky Friday franchise, an issue where the car park shuts on them, and the trio being extorted by a greedy Wilson’s Car Park employee to let them leave. The gist of things is a tenuous link between the Freaky Friday franchise, switching bodies, and the urban legend of Jamie-Lee Curtis being born a man, was both pushed by weird TERFs and also misinterpreted. She was born a wizard, with magic powers, rather than the Jeff Farmer variety of wizardry.

Both are suitably shocked, and hesitant to engage in these Faustian bargains again (Grundy having previously agreed to participate in one of those shit Cash Converters ads and only obtained slightly above average guitar playing skills in exchange. Grundy the Rock Star. Doesn’t suit him).

“Switch places? To the arch-enemy? And let down hundreds of thousands of fans? Risk ruining our reputation and legacy? We still get paid the same though right?”

Jamie-Lee Curtis knew that the answer was affirmative from both men before they even said anything, and does some weird shit with her fingers and conjures up a portal, which we can assume is some form of time-travel.

All three step through the portal, as it closes not a moment too soon, as Marc Murphy’s bloodlust for the smell of a crisp $50 note had hit fever pitch and was about to pounce on all three.

The time portal takes them to October 2021, the deadline day of trade week to be precise. It’s the Docklands, it’s freezing, soulless, no-one rents there, and its where small business goes to die. It could be any day in the past 20 years. Jamie-Lee Curtis has shit the bed, and has made a grave mistake with time travel, as all three are wearing afros, bell-bottoms, platform shoes and low-cut puffy shirts for no real reason other than that they’ve turned up in the wrong time period.

Before he can complete the sentence, the Carlton coach and list manager have changed three times each. The current duo of David Kernahan and Trent Sporn look puzzled. Eddie McGuire peers in through a nearby window, sweating so much, he needs to take his trademark suit jacket off, and his white hood nearly falls out of its inner pocket.

“Guys, we’re here from the year 2027,” Cripps begins to explain, but before he can complete his explanation, is bombarded with requests from everyone else in the room to tell them who wins the next six years of Logies. Once everyone is suitably let down by hearing that the Logies are canned out of respect for the pinger-overdose related death of Bert Newton, they are more than eager to hear what these two grizzled, futuristic husks of their former selves have to say.

“Yeah nah. 2027. Neither of us ever win shit. You just pay us a lot of money for not much output. I get an adamantium spine replacement and start playing some decent footy, but fuck it, it’s Carlton right? And Brodie breaks his own hitouts record every year, but they’ve got no midfielders. Pendles is still in their starting midfield rotation at 39 –or at least he will, once he gets out of jail for leading that anti-mask rally on ANZAC Day. Still won’t give Brayden Sier a game either, or trade him”

The Carlton crew are puzzled. Not only to be the next in the line of Carlton list managers, finally legitimizing a 50 year reign of who had really been pulling the strings at the club, but Mick Gatto is finally gunned down by the reanimated corpse of Andrew Veniamin, leaving another vacancy at list manager. Robert Walls in an unconvincing moustache and glasses emerges from under Ben Rutten’s chair, and awkwardly assumes the role of list manager.

“I see what you’re saying. Marc Pittonet is out of contract, Levi Casboult is out of contract. Both are no good. Tom De Koning is a second/relief ruckman only. So what you want is for Brodie Grundy to be given a run in the ruck?”

Walls, having satisfied his two-note joke, quickly makes eye contact with Jamie-Lee Curtis. The two fall madly in love, and fly off in the car from Grease over the West Gate Bridge to his vineyard in France and live happily ever after.

“That’s right, Wallsy,” yells Cripps out the window after them, before realising the futility of his actions. “Collingwood rank first in the competition for hitouts at 36.5 hitouts per game (32.7 for Grundy, competition average of 28.5 per game). By contrast 14th for centre clearances (8.8 per game, comp average of 9.2) and 8th for stoppage clearances (20.7, comp average of 19.4). 10.6 hitouts to advantage a game (third in the comp behind Naitanui and Gawn, similar stats to Sean Darcy and Marc Pittonet), and they’ve still finished bottom four. What’s the point of paying him to be elite when it makes bugger all difference? At least if you pay me a similar amount, you can extend the careers of Steele Sidebottom and Scott Pendlebury a little bit longer by giving them a bigger body to take the burden on” he barely gets all of it out, feeling the strain of the lengthy set of stats on his adamantium based spine.

Grundy looks at the vacant chair of the Collingwood list manager role, containing a sizeable turd left by Ned Guy, and chooses to address it anyway, as if it were sentient. “And you blokes need draft picks for Daicos at the end of the year. Get the Blues to cough up something, and maybe even throw a bone to Brayden Sier to fill the gap left by Crippa too. Haven’t I done enough damage to this list? Treloar. Stephenson. Now you’re probably going into 2022 in a negative-points balance for draft picks too.

Buy low, sell high right boys? What if Cripps has just been smashed by a series of crap coaches and even worse teammates, coincided with niggling injuries that haven’t been given proper time to heal and a paradigm shift in how the midfield is run. What if he gets back to his best, or better? What if the system at Carlton produces nothing but metastasized cancer?”

The giant turd is unmoved and stoic, but a tear drips from its precipice. He knows a compelling argument when it sees one. David Kernahan lifts the turd up into his arms. “Love Lifts Us Up Where We Belong” plays over the loudspeaker at Marvel Stadium, as they head towards a private corporate box to discuss a formal trade, and whether either team pay a portion of the other’s salary.

Steam eventuates from under the door, but its from trying to get the fax machine to work. “Cripps and Carlton’s first rounder for Grundy and Sier with the Pies paying the difference between the two salaries” is too much for the 5G Telstra network to bear, until Bill Gates provides the necessary vaccination boost to get it over the line.

We have a deal it seems.

Everyone is happy. Embracing. Hugging. Interpretative dancing. Only for Cripps and Grundy to wake up in the same bunk bed.

Was it all just a dream?