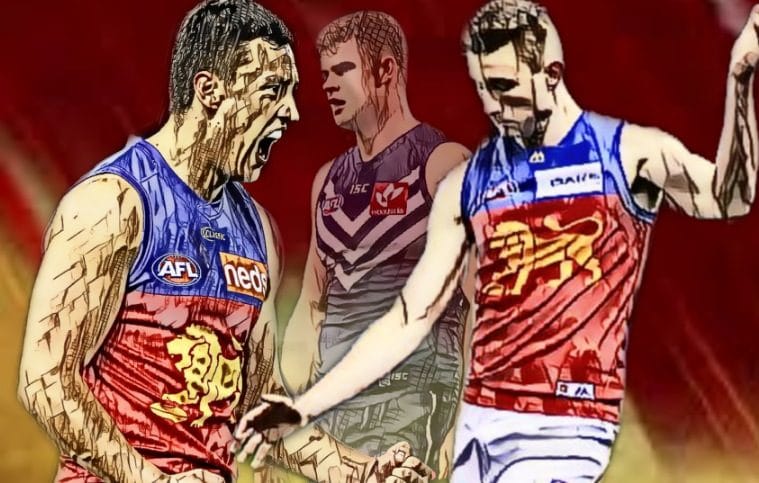 The first of two games in Perth for Round 21 saw an interesting match-up that presented itself as a test for both teams’ legitimacy.

The Lions came in having lost three of their last four matches and experiencing their worst month of footy this year. They had lost touch with the top four and needed a steadying win to start finding some form before finals action begins. Fremantle have been one of the pluckier sides in the competition this year. They’ve shown their best is clearly good enough to mix it with the top teams, but they’re just a bit too inconsistent. However, they found themselves inside the top eight coming into this round, following their heartening win over the Tigers last week.

Both teams have had more than their fair share of injuries, which has forced the selection of some lesser-known and left-field prospects. Players like Cockatoo for the Lions and Western for the Dockers have been given the chance to show their wares. Both showed some good signs, for what it’s worth.

This game started really fast. You would think most games do that, but I’m here to tell you that you’re wrong. The intensity and pressure around the ball was ferocious. Both teams would not let the other come up for breath for the first 10 minutes of the contest.  Fremantle would drop away, but I think that’s more of a reflection of how high the level of intensity that Brisbane were playing with. Their attack on both the ball and their opposition for the entirety of the first half is exactly what Lions fans will be hoping they bring for the rest of the season. Zorko, Lyons and Berry were plying their trade at the contest and feeding the likes of McCluggage and Robinson on the outside. The forwards were moving for each other and when they didn’t win the ball, the pressure on the Fremantle defenders was evident.

A couple of Fremantle players looked like they were having dirty days. Some of their possession tallies may look better upon review, but the likes of Mundy and Ryan were down on the impact they would’ve wished they had, particularly in the first half, if the Dockers were going to try and get a win.

Fremantle came out rejuvenated after half time and kicked three of the first four goals to tease the idea of a close match before the Lions steadied. It must’ve been really pleasing for Chris Fagan as his team finally assumed the role of the more mature unit and simply accepted the hits the young Dockers delivered and then responded with their own. They would outscore Fremantle in the quarter and have some dazzling team play to set up some simple goals and put the game absolutely beyond doubt with a 53 point lead.

Let’s get into the stuff that mattered….

From the very first bounce, Dayne Zorko took control of this game. He was not going to allow a repeat of last week. He got pinged for dropping the footy early in the game, in the Dockers forward line, but I think that was a bit of a hot call by the umpire. But the true testament came after. Zorko didn’t let it get to him in the slightest. He came into this game with a clear intent to dominate and not give the Dockers a sniff. And that’s exactly what he did.

Zorko has copped a lot flak this season for some of his performances and his leadership style, but there was no questioning those today. He might as well have been Jonathon Brown out there; such was his stature. He finished with 34 disposals (17 contested), 11 inside 50’s, 10 tackles and over 800 metre gained. Wow.

Andrews continued his form as a one-man wall in the Lions defence. He proved to be one of the key differences between the teams in the first half of this match when the Dockers were very much in the contest. Fremantle continually kicking the ball long into attack, trying to make use of the extra height they had in the team, definitely assisted Andrews in racking-up another Mongrel Punt defensive double-double (10 or more intercept possessions and one-percenters), and no doubt has him closing fast on a potential All-Australian nomination.

The one consistent thing you found when the Dockers were taking their marks inside 50 is that Andrews was blocked or matched up somewhere else etc. When Andrews was kept busy, Fremantle had a chance. Unfortunately, they couldn’t keep him busy for long enough to do enough damage.

Lyons added another very solid game to his break-out year, emerging from the shadow of the injured Lachie Neale. Zorko led this game for the Lions, but every Batman needs a Robin and Lyons was right there beside old Batsy ready to handle any issues the caped crusader couldn’t quite get to.  Lyons had 29 disposals of his own, including eight clearances, and also laid seven tackles.

A week after almost being declared missing and putting out an amber alert for every member bar McStay, the Brisbane forwards were located, right on time, arriving at Optus stadium in the first quarter. Sure, they had some help from McInerney and Zorko, and also a couple of 50-metre penalties, but the Lions forwards still did most of the damage on their own. Joe Daniher found some marking form and Lincoln McCarthy continued his uber consistent season and resumed his usual level of scoreboard impact after last week. Yes, it was a good day for the Lions forwards.

Charlie Cameron even chipped in for a couple of goals and some goal assists to signify that he could still be an x-factor come finals. It can be underestimated how much self-preservation can come into play when a side has been struggling for an extended period, but you have to give credit to the Lions forwards who were as generous as ever. They shared the football incredibly well to set up easy shots on goal for each other.

After being shaded by a very young player last week McInerney faced a significant test against one of the top three ruckman in the competition in Sean Darcy. And boy did he ace that test. McInerney more than held his own and responded well to having his colours lowered last week by a relative unknown. He Matched Darcy pretty evenly in every category, from hit-outs (23-29), clearances (7-5), disposals (17-17) and even kicked two goals to Darcy’s one. The fact that the majority of Brisbane’s score came from stoppages is a testament to the level of work McInerney did in this game. A standout effort.

I’m sure Fremantle fans are well aware, but they have found an absolute jet in this kid. A rare highlight in the Fremantle defence as Young looked dangerous with footy in hand coming out of defence. He received his rising star nomination for his huge game last week but backing it up and starting build some consistent form is what will be exciting Freo fans far more.

I thought Colyer deserved a mention in this category. In a forward line stacked with height and a game plan to kick the footy long to that height, and Colyer was the only Fremantle player to kick multiple goals (three) in this match. A slippery foot got through his hand in the third, but it was a strong kick in the wet from Mundy. A more than respectable performance overall, from Colyer.

Who the hell knows what will be made of this incident? My take is that Starcevich was over the ball and that should play in his favour. Maybe a week, maybe nothing? Has he upset the MRO in any way? Does he have a reputation at all? Is he a Pisces? Who knows what is relevant with such inconsistent findings…

Footy in front of Fans

I’m going to keep putting this in every review. Footy in front of a parochial crowd just elevates the game to another level. The early decisions not going the Dockers way and the technical 50’s the Lions received were a beautiful sub-plot throughout the games. The Bronx cheers when Fremantle received their next free kick. Just beautiful. Sometimes you have to lose something to remember how much you enjoy it, and the sound of a passionate crowd is one of those things I always took for granted.

Also, I absolutely loved the byplay with the Lions fan early in the third quarter. Old mate held the ball for an extra second or two, just to make sure he was giving the ball back to the right player, to give his team a bit more time to set up and didn’t the home fans let him know that they did not approve one bit. You can’t blame him though; you wouldn’t want to give the ball back to the wrong player and cost your team a 50 meter penalty. 😉

Geelong could’ve used a couple of players like McCarthy and Cockatoo on Friday night. The Lions must have some good medical staff or are we to believe the rumours about a warmer climate being better for the body? Either way the Lions have something going right for them with being able to get perennially injured players right. Cockatoo played with a good level of desperation that reflects a player who knows he’s on the edge of a team about to get a couple of players back from injury. He could be an ace up the sleeve of the Lions in a big game in a couple of weeks.

I understand they had personnel out, but the Dockers were still in the eight when this round started and only had to win to remain there, and they could not have picked a worse time to serve up a poor performance. Particularly after such a stirring victory the previous week. To add insult to the Dockers long injury list is the fact that GWS, Essendon, St Kilda and Richmond all fought out tough gritty wins and leap-frogged them on the ladder. They’re now outside the eight by half a win and even if they managed to get back to equal points they are suffering from a very poor percentage, which effectively adds another game they have to win.

Next week’s Derby will be must-watch viewing. With Fremantle looking unlikely to make it into finals, even with two wins, do they have enough left in the tank to get a victory against Eagles, almost out of pure spite, to ruin their rivals’ season?

After a very poor month, the Lions look to have responded. A critical win to ensure they host a home final in the opening week of… September (I’m still backing it in). The Lions can now move with certainty on where they sit in the grander scheme of this season. No longer worrying about top four (even if Melbourne lose, Lions fans, they would need to also lose the following two games and you need to win both, for it to be a chance. I’ll eat my hat if that happens) and also safe from dropping below sixth. They have a potential finals preview in the last round against West Coast, who could be playing for all the marbles (and Adam Simpson’s job).

Anyway, the Lions will be relieved that their forwards have found some form. It doesn’t matter against who, goals are goals, and the Brisbane forward line was barely sighted for most of last week.