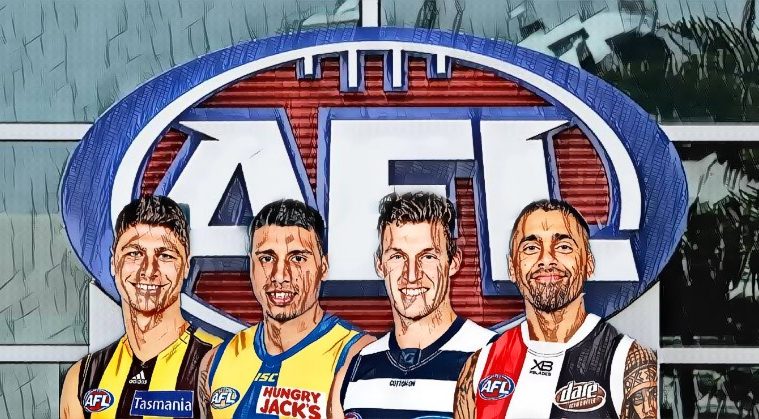 The silly season has come and gone but remarkably, some of the biggest names have remained stagnant in a trade period that had its fair share of twists and turns.

At the end of it all, how did your club fare? This ladder incorporates your club’s performance in both the trade and free agency periods. It evaluates who has best improved their team’s position for now – and the future. Clubs that were able to add good quality players as ‘value recruits’ for giving up little have been looked upon particularly favourably. The end result of the trade period is considered but so is how the club got to that end result. If clubs embarrassed themselves with dishonesty without producing the goods, they should not expect a high position. However, that does not necessarily mean clubs are punished for having a crack but not pulling everything off. Clubs who made the best of a bad situation are also given credit, but crucially without ignoring why they are in the bad situation to begin with.

Without further ado, here it is…

OUT – A future second round pick, Lewis Taylor + late picks

The Lions were not the obvious winners of the trade period but I was really impressed with the players they were able to bring in for little besides one future second rounder. Hawthorn four-time premiership legend Grant Birchall is the perfect Luke Hodge replacement in the half-back line and will provide the young Lions side with more great leadership. Brisbane also expect Callum Ah Chee to be a part of their Best 22, whereas, Cam Ellis-Yolmen will provide midfield depth. They are in a good position.

OUT – A future second round pick, Pick 32 + late picks

The Bulldogs were not involved at all until the very last day of the trade period where they snared both a key forward in Josh Bruce from St Kilda and key defender in Alex Keath from Adelaide. Both players will strengthen the Bulldogs’ spine and were able to be attained without selling the farm. Well played.

St Kilda were by far the busiest club of this year’s trade period but were able to secure all of their five player targets. However, as Simon Lethlean stressed post-trade period, this meant they were not necessarily able to ‘win’ every deal. Regardless, the Saints are in a much better position for season 2020 now, especially with the inclusion of Bradley Hill – who was not cheap.

This trade period was not a disaster at all for Carlton. The only thing Carlton lost was the opportunity to have a brilliant trade period after missing out on Tom Papley and Jack Martin (but watch this space on him). The fairytale return of Eddie Betts is a good result for Carlton. While, the small forward is in the end of his grand career he is still capable of producing some magic, especially now that he is at a club where he wants to be. He will certainly get the turnstiles clicking and the merchandise shop cash register ka-chinging.

Capitalised on Melbourne’s desperation to get another top-10 pick in a big way, in one of the most one-sided deals of the trade period. Aidan Bonar from GWS could also prove to be a handy pickup.

St Kilda four-time Best and Fairest winner Jack Steven could prove to be a pickup for the ages, provided all goes well. Considering the Saints have most of Steven’s salary still on their books for the next two years, he is certainly worth the gamble. As is Josh Jenkins. However, Geelong did lose the best player in this year’s trade period but received a windfall of picks that mean they could be the winner in the long run.

Picking up GWS Grand Final player Adam Tomlinson as a free agent was an impressive signing and Ed Langdon from Fremantle is another good recruit. However, the Demons slid down the trade ladder after their decision to trade their future first round pick, Pick 26 and Pick 50 for Pick 8 which was a stinker.

It is a promising sign that Gold Coast were able to receive players who want to come to their football club this trade period rather than just an endless line of picks. But the Jack Martin situation remains unresolved and is troubling as he could well walk for nothing. Gold Coast have had plenty of opportunities to take a stand on a contracted player wanting out, but when the player is out of contract just get the deal done.

The Power were successfully able to glean an extra first-round pick for their decision to trade Dougal Howard. While Howard is in the right age demographic and has potential, he has fallen down the pecking order of Port’s key backs to the extent that he started and finished the season in the SANFL. Port is now well armed to attack the draft once again.

Like fellow Hawthorn legends Sam Mitchell, Jordan Lewis and Luke Hodge before him, Grant Birchall misses out of the opportunity to finish his career at the Hawks. However, the four-time premiership player is certainly in the twilight of his illustrious career. Jonathon Patton came cheap but is largely an unknown quantity due to his injury record.

IN – A future second round pick, Darcy Cameron + late picks

Collingwood were largely inactive which is not necessarily a bad thing. However, it does mean that they were not able to shed any salary cap space to ease the stress of twelve months of important contract negotiations.

Peter Bell was able to salvage the best possible deal for Bradley Hill after initially walking away from negotiations. But losing a contracted Best and Fairest winner for the second year in a row is seriously concerning and is halting their progression up the ladder. Ed Langdon too is a disappointing loss. There are problems at Fremantle.

Played defence for the majority of the trade period. The end result being that All Australian forward Joe Daniher remains a Bomber, as does Orazio Fantasia, who also weighed up his future. Keeping Joe Daniher is an especially good result provided he is willing to still give his all for Essendon after publicly requesting a trade to Sydney. It is a risk keeping him. But the bigger question is – why were two leaders of this football club thinking about leaving in the first place? There are problems at Essendon.

OUT – Brandon Ellis and Dan Butler

There aren’t too many problems at Richmond. Although, this is the lowest they have been on a ladder in quite some time. The Tigers were not able to add anything to their list this trade period but did lose dual premiership player Brandon Ellis and another premiership player in Dan Butler.

Adam Tomlinson and Jonathon Patton depart the club for very little. Whereas, the Saints got the better of them in a pick swap that saw GWS give up Picks 12 and 18 for St Kilda’s Pick 6. GWS were able to secure a new number one ruckman in Sam Jacobs but he is not a long-term solution.

West Coast completely stuffed up the Tim Kelly situation in contrast to Geelong who played it beautifully. The Eagles refused to cough up for Kelly twelve months ago, meaning they missed out on having an All Australian midfielder complement their premiership defence that may have advanced further. Yet, they held out only for a significantly worse deal despite the fact that Kelly was no longer contracted. This is a message to other clubs, if you want a player just do the deal the first time or you pay for it later. Which brings us to…

What has happened to this club?

Remember the calculated move to snare Lance Franklin from GWS’ clutches in football’s heist of the century? Compare that to the Amateur Hour of this year’s trade period. CEO Tom Harley categorically denied – falsely – that Sydney would even make an offer to Joe Daniher. But it became apparent soon enough that they were doing just that but did not have the competence to get the deal close to being done. How embarrassing.

Adelaide has not exactly thrived during trade periods in recent history. The Crows were not able to halt the continuation of the mass exodus that has plagued this football club for far too long. But the problem is that they received next to nothing in return and have to pay large portions of the salaries of some the players walking out the door. The fact that favourite son Eddie Betts, who has a pocket of Adelaide Oval unofficially named in his honour, has also broke a contract to walk out on the Crows is a sad reflection of how far they have fallen.