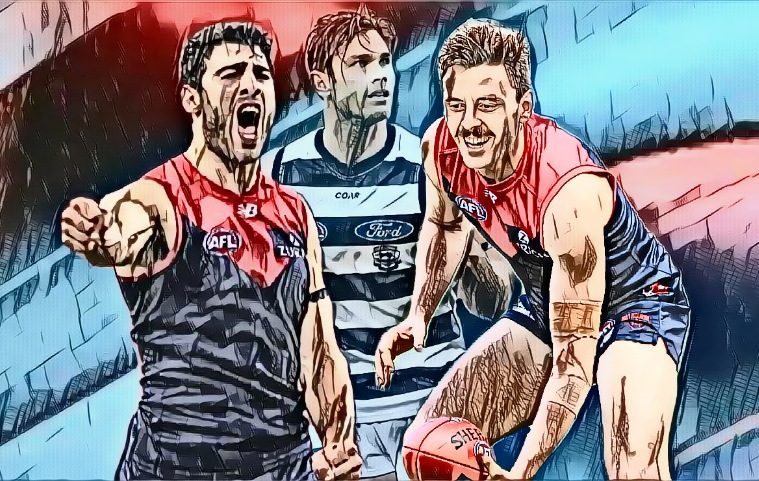 In wet and windy conditions on the slippery MCG turf, two of the challengers for the 2021 flag clashed. Melbourne started well and survived a third-quarter fightback to defeat the Cats 12.13 85 to 9.6 60. The Demons started well early, registering six scoring shots to two in the first quarter. However, their task looked like it was about to be made much more difficult as they lost star full back, Steven May to a nasty cut, courtesy of an accidental TomHawkins elbow on a handball motion.

The clearance work and better team structure enabled the Demons to withstand a Cats fightback, as they closed the margin to 12 points at the final change. Melbourne kicked three goals to one in the final quarter to put the game beyond doubt, keeping them undefeated for the season in second spot and placing Geelong ninth on the ladder. The Cats, however, will welcome back Jeremy Cameron, Patrick Dangerfield and Gary Rohan in the very near future.

In the lead-up to this game, the number one question on everybody’s mind was: Who will Mark O’Connor go to; Petracca or Oliver? The midfielder that is prolific by hand? Or foot?

The answer was… both

O’Connor started the game with Clayton Oliver and despite Oliver having seven first-quarter touches, his impact was severely limited with those touches gaining zero metres and only one clearance. However, that match-up was quickly abandoned as Christian Petracca ran riot with 11 first-quarter touches, one goal and two stoppage clearances. O’Connor tried his guts out but the dynamic duo for Melbourne were far too damaging, combining for a mammoth 67 touches 14 clearances and 17 inside 50 entries.

Despite these devastating numbers, O’Connor could hold his head high as he not only didn’t receive much defensive support on these two bulls, but the Demons held a sizeable ruck advantage, which I will go into a little later. At every opportunity, O’Connor also had to fight through the blocks of the other Melbourne midfield, which ultimately freed up his direct opponent. O’Connor had only ten touches and two tackles for the game but for any young midfielder out there, watch the positioning of himself defensively at contests. He constantly had touch on his direct opponent and did not infringe at a stoppage, despite all eyes on him.

NO BLOOD, NO FOUL

When Steven May went down with a nasty cut, just as the second quarter commenced, it appeared that the Cats got the break they were after. May was superb on Tom Hawkins in the first quarter, routinely taking the body of the Geelong power forward. Five rebound 50’s in the first quarter alone set the stage for the remainder of the battle.

After the untimely injury (which was 100% accidental) the Demons sent utility Adam Tomlinson to Tomahawk and kept Jake Lever as the floating defender. The Cats made a mess of a large amount of forward 50 entries, routinely going wide and hardly isolating Hawkins well, where he is at his most dangerous. Tomlinson was step for step on the big forward when he got on the move, however, his counterpart played the perfect supporting role. Chris Scott often left Lever as the spare behind the ball, and he made them pay with ten intercept possessions and made one of the plays of the game.

In the final quarter with a 26 point margin to make up, Geelong were pressing hard, after a free at centre half back, the Cats pounced and took the advantage. Lever was alone in defensive 50 and was facing three attacking Cats in full flight, however, Lever played the situation perfectly. Backpedalling slowly he invited Jack Henry to bounce, and as he did on the wet surface Lever pounced, sliding out like a goalkeeper to smother the ball, he followed up immediately with a diving tackle on Zack Tuohy and soccered the ball 60 metres downfield for a throw-in. Inspirational stuff.

Watching Joel Selwood and Jack Viney go head to head was a throwback to the physical (but fair) style we all love to see. These two warriors left it all out there in trying to get over the line. Quite often these two are not relied on to get a lot of heavy ball, but this was not the case today.

Selwood and Viney both contributed early, with Selwood having 18 disposals for the half, Viney close behind with 15. In the third term when Geelong mounted their comeback, Selwood lifted a gear, notching 11 touches, two clearances and a staggering 24 pressure acts. He was unable to impact the last quarter unfortunately as Melbourne got on top.

Viney had a game-high 12 tackles to go with 24 disposals and 16 contested possessions and eight clearances. Following Lever’s effort, Viney followed up with another piece of brilliant, inspirational play. He charged off the interchange bench and unleashed a diving spoil on a wide-open Mitch Duncan on the wing, that caused a turnover and led to a deep inside 50 entry.

Man, I love the way he goes about it!

NOT YOUR AVERAGE SWINGMAN

For the record, when the move occurred of changing Bailey Fritsch from half back to half forward a while back, I scratched my head and wondered what he did wrong. His field kicking was absolutely exceptional and he was able to release many of the midfield brigade into extremely advantageous positions. I was sure this move would backfire…

However, I’m more then able to admit when I’m wrong…

And boy was I wrong.

The revelation of Fritsch as a half forward adds a high amount of class and polish to the forward line the Demons have. He was brilliant today, being in the right place at the right time. As a finisher he was deadly, kicking four straight, assisting on two more and taking eight marks (two contested) for the game. His hands, especially in the wet when he took a pressured mark and kicked truly in the rain, were impressive.

For the opposition, Chris Scott decided to throw Jack Henry forward, and that worked pretty well. Henry combined with wingman Isaac Smith to kick four goals in the third quarter to get the Cats within striking distance.

A HELL OF A TIME

The combination of Max Gawn and Luke Jackson provided headaches all game. Gawn was dominant in the ruck with 23 disposals, six marks, four tackles, a goal and seven clearances. Rhys Stanley and Mark Blicavs battled but ultimately provided little resistance aside from Stanley sneaking forward after a free against Gawn in the middle, to kick a goal while Gawn was stranded on the mark in the centre circle.

Jackson really moved well and was an aerial threat all game, in dry conditions, the second year ruck-man could have really stamped his authority on the game and kicked a bag.

This was a great contest between the two. At first view, if you looked at the stats and saw McDonald having nine marks and 21 touches, you’d think that told the story. However, that doesn’t tell the full story. The big Demon was often forced out to high half forward, often due to Jackson commanding position in deep forward 50. Kolodjashnij was able to keep McDonald grounded inside forward 50, grabbing 16 touches and six marks for himself, though often allowing Stewart and Atkins to fly without worry of a charging key forward about to mow them down.

I know, I know. He played a half of reserves footy the day before…

But boy he looked either injured, underdone, or he simply would rather be in the stands staying out of the rain. He wandered around the stoppages like a lost puppy, and his trademark explosiveness was completely missing. When he came in as a late replacement for Brandon Parfitt, I was genuinely excited as he would likely be entered into the war in the clinches with the premier inside midfielders that Melbourne had. The few times he had possession and time he absolutely wasted his disposal and made life hard for the forwards.

It was good to see Menegola back for the Cats. With a few reinforcements back, he is able to get re-acclimatised to the game as Geelong can really start to mount their challenge. He didn’t seem as damaging as normal, but just kept on working. 23 touches but a little rusty with an efficiency of 61%

Charlie Spargo – I really rated the kid, watching him in the under 18’s. His composure and poise really stood out. However, it seemed he got a really bad neck and knee cramp at a really bad time, as he fell to the ground and his head nastily whipped back. Please don’t be that guy, Charlie…

Christian Salem did an outstanding job on Gryan Miers. 22 touches and eight rebound 50’s for the Scything Salem. Miers for his part had 17 touches but mostly was kept outside of the corridor, where he is most dangerous.

Ed Langdon was sensational on the wing for the Demons. He was often matched with Zach Tuohy for the game and tuned him up with 26 touches, a goal and nearly 500 metres gained. I was surprised that Geelong didn’t try Isaac Smith on him for the majority of the contest. Langdon covered the second most ground in the whole contest, beaten only by Smith.

Jordan Clark should get some midfield time in the Cats’ rotation. He is precise with ball in hand and the run and carry he provides can also be damaging. He would not be out of place, considering he has the hair of a young Peter Riccardi

Speaking of game-plan, I think the Cats needed to roll the dice with Luke Dalhaus. He has been a match winner, and a quality player in the AFL before, yet he took a back seat today. Pretty much unsighted with the game in the balance.