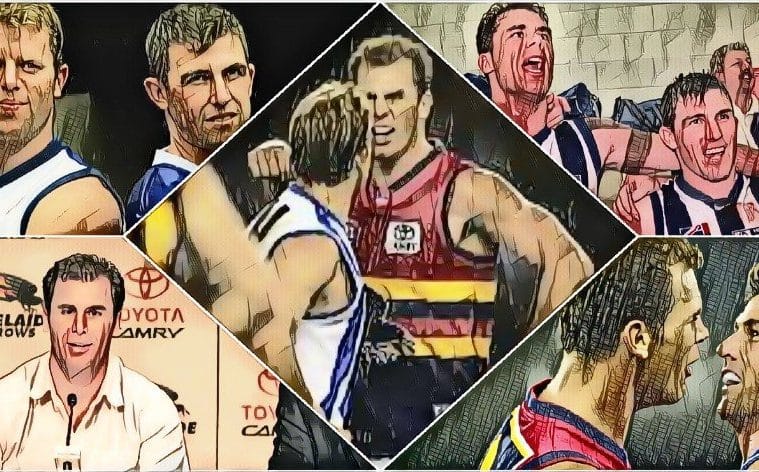 MEMBERS – An Oral History of the Carey-Stevens-Archer Triangle

In March 2002, events took place that rocked the football world. At a birthday party for the wife of Glenn Archer at the couple’s Warrandyte home, Kelli Stevens, wife of North Melbourne vice-captain Anthony Stevens, followed Wayne Carey into a toilet and effectively brought a very unsavory chapter to an end and began another.

It occurred at the end of a two month affair between the couple, and spelt the end of the career of Carey at North Melbourne. In effect, it tore the heart out of a football club, its players, and supporters, and cast a dark shadow over the life of all involved for an extended period.

Below is the story of one of the biggest events in AFL history. Yes, it is personal, and many believe it should be put to rest. I understand there are so many more people involved in this that are still impacted by what went on. Children, new partners, families… all would get a sick feeling whenever it is brought up, but the significance of these events on the North Melbourne Football Club and those who love it, were profound.

My family are North Melbourne supporters. I can remember my late father being in complete shock when this happened, just shaking his head as he read the newspaper. Like most football supporters at that time, my respect for Wayne Carey as a player could not have been higher. I’d watched him destroy my Hawks and become the player the Roos were able to build around. And then came Glenn Archer – a wound-up ball of power and aggression just waiting for the opportunity to explode. Finally, there was Anthony Stevens – the quiet achiever, who had worked his way to become one of the best, and most unsung midfielders in the game, so much so that he was elevated to the vice-captaincy alongside Carey.

People were stunned when the news broke. Completely stupefied. I remember my auntie – the most one-eyed supporter I’ve ever met, talking about how much she hated Carey in one instance, and how much she loved him in the next. It clawed at the hearts of North Melbourne supporters. It went much deeper than just a falling out between players. This was not just the breakdown of the Carey and Stevens families; this was the story of the breakdown of the North Melbourne Kangaroos.

And it was also the story of how the club rallied, and picked itself up again.

In terms of magnitude, the events of 2002-03 have probably been surpassed by the Essendon Drug saga in terms of exposure, implications and damaged reputations, but for weeks on end in 2002, and then in the lead up to the Adelaide v North Melbourne clash in 2003, there was no bigger story in footy than the situation between Wayne Carey, Anthony Stevens and Glenn Archer.

This story is in their own words, told as it happened by those involved. This isn’t spin, or adding anything to spice it up. These are the words of Wayne Carey and Sally McMahon, Anthony and Kelli Stevens, Glenn Archer, Brent Harvey, David King, Geoff Walsh, Ricky Nixon and others.

“Duck and Stevo were like peas and carrots: inseparable as captain and vice-captain. They were super tight, like brothers.” – Brent Harvey; all-time games record holder, in his book, Boomer.

“When the affair was happening and I had inklings of it happening, Wayne all of a sudden was becoming even closer to me, which I found strange.” – Anthony Stevens in 2015 article in Redland City Bulletin

“Even before I joined the Kangas, I’d heard talk of women and others being paid hush money over something Wayne had done or said. Whether that was actually true or not, there’d been a perception that Duck was looked after and protected by the club. There were rules for Duck and rules for everyone else.” – Harvey, in Boomer

“Clearly I wasn’t thinking straight. We both understood the risks we were taking in behaving in this most selfish and irresponsible way yet we continued to tempt fate. Maybe we thought we’d never be caught.” – Wayne Carey in his biography, The Truth Hurts