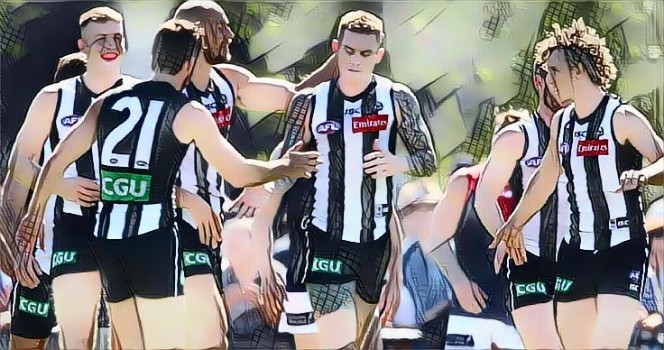 Is it now or never for Collingwood?

The rebirth of the Collingwood Football Club under Nathan Buckley has turned into one of heartbreak, so far, at least.

At the end of season 2017, Collingwood was at a real fork in the road moment in regards to their underperforming coach, and club great. Nathan Buckley was out of contract and under pressure. But perhaps the Collingwood hierarchy saw something that many did not? Or perhaps they were influenced, consciously or subconsciously, by the evolving fairytale of the Richmond Football Club who stayed its course with their own under-fire coach twelve months previously and were now on the way to a remarkable premiership? Whatever the case was, Bucks stayed.

Since then, Nathan Buckley has transformed himself into arguably the best coach in the competition. He was voted as by his peers as much the very next year in 2018 in Grand Final week. A large portion of his transformation has been credited, like Hardwick, with his greater emphasis on his relationship with his playing group. The Collingwood: Inside Out documentary, which aired last month on the ABC, depicts this transformation better than my words can from an outsider looking in. It’s certainly worth a watch. On the flip side, we have seen recently how coaches who have failed to make such transformations and have been criticised for their relationships with their playing group. These coaches have not survived.

Unlike the Richmond story, Collingwood’s has not yet ended in premiership glory. The Tigers tears of joy have been replaced by tears of finals heartbreak for Collingwood, and this includes Grand Final heartbreak. Intriguingly enough, last year’s Grand Final loss did not hurt the playing group much as this year’s prelim defeat. At least according to captain Scott Pendlebury who told The Age in the aftermath of the GWS four-point loss, “this is worse because you don’t get the opportunity to even get there.”

“I would rather have my heart broken again next week if I was in it then not even give yourself a chance to win it.”

This Collingwood group can now distinguish between its finals heartbreak.

Nathan Buckley was even stronger in his disappointment in the post-match media conference after the prelim where he dubbed the season a “waste.” The Magpies did finish fourth in an 18-team competition and if the season is looked at in this context, the “waste” evaluation seems a touch harsh. However, this only emphasises the fact that Collingwood is in the premiership business. It’s a business all clubs should be in but some simply are not. So the question is; how many more seasons can Collingwood afford to waste?

Losing a Grand Final by a kick in 2018 and a prelim by practically the same margin the following year means that no side have been closer to winning a flag, without doing so, in a decade. The St Kilda team of 2009 and 2010 still trumps the current day Magpies, as they missed out on the ultimate glory by a kick and then a bounce.

But the “now or never” element creeps into the Magpies’ 2020 mission as a result of a salary cap that is reportedly bursting at the seams. This is despite major players coming out of contract at the end of next season including Brodie Grundy, Scott Pendlebury, Jordan de Goey and Darcy Moore.

The spanner that was thrown into Collingwood’s salary caps works, which went against their list management planning significantly, was last year’s Dayne Beams trade. This is because the option for trading for Brisbane’s captain only came up extremely late in the piece. It is worth remembering that Beams, in his runner-up speech at the Lions’ Best and Fairest count last year, practically announced that he will remain at Brisbane.

“The amount of support you’ve shown me over the last six months has been unreal … I can’t wait to see us progress as a team and a footy club.

“That was a real driving factor in me wanting to stay here and stick around and I love where we’re going and I love you boys.”

It became apparent soon enough that he was in fact leaving and Collingwood swooped trading two first round picks to bring its star premiership midfielder home. There was an emotional and compassionate element into Collingwood’s decision to trade for Beams due to how much he is loved by their supporter base and their genuine desire to support Beams with his mental health issues. A club does not trade away two first round picks on a 29-year-old unless they are playing for the now.

However, the Beams trade caused salary cap chaos for Collingwood that has now manifested in some degree of frustration. Dayne Beams’ four-year deal is heavily back-ended to absorb the million-plus dollars that remained on the two years he had left on his Brisbane contract. In order to fit Beams into the salary cap, between eight and 12 players agreed to take between $30,000 to $40,000 in pay cuts. A player manager told the Herald Sun last year that the players were happy to agree to such drastic action because “the players know they are in the window and they want to win a premiership.”

Fast-forward a year, and multiple players who agreed to take such pay cuts to cater for the recruitment of Dayne Beams are frustrated with how the trade turned out. Beams was only able to play 9 games in 2019 due to injury and his leave of absence undertaken to deal with his mental health issues.

Collingwood’s bursting salary cap is a result of more than just one trade as they have built a list of stars that demand large pay packets. Whether they can keep them all beyond next year is another story and one that looks unlikely but not impossible.

So, is it now or never for the Pies?

Good old Collingwood may be forever, but in a world where premiership windows open and close quickly, this is a team is built for now, and after the 2020 season, we may see a Magpie team with a few less A-Grade players.