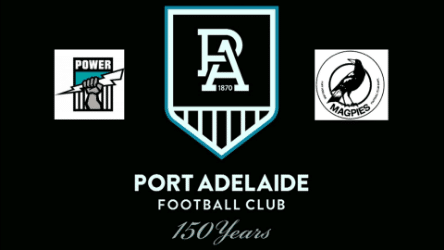 150 Years on: Port Adelaide is back together again

It all started with a cup of coffee.

However, in true Port Adelaide style it ended with beers and one mighty celebration. That is how Port Adelaide launched it’s 150th anniversary season on the weekend that coincided with the unveiling of a new commemorative logo – complete with a new beer can.

The logo design process took two and a half years, but the club has been building towards its 150th birthday party for many years. It’s a lot of hullabaloo for an anniversary that has been achieved by multiple other AFL clubs, including North Melbourne as recently as this year. 2019 also marked Geelong’s 160th anniversary. Yet the fanfare has been unparalleled at Port Adelaide, who, along with the brand-spanking new logo, will also release two new documentaries, a new book, and parade an entire wardrove worth of celebratory jumpers in 2020. This includes the prison bars jumper in the home showdown, as revealed by The Mongrel Punt back in June. But there are many reasons as to why this historic anniversary means more to Port Adelaide than to other clubs.

Firstly, Port’s not exactly shy about discussing its history that has made it the most successful senior football club in Australia and features the unique story of elevating from a suburban league outside of Victoria to the national stage. It’s a history that the club had to fight even to be recongised only a dozen years ago in 2007 when it took on city hall – and more importantly the now Holden Centre – in a battle for the rights over the 1870 establishment date and the prison bars jumper for heritage rounds. It achieved mixed results.

The second reason this anniversary is so important is that earlier in the decade, it was highly doubtful that the club would survive long enough to even reach it. Certainly, ten years ago in 2010, when the club ‘celebrated’ it’s 140th anniversary at a depressing day at Football Park, you would not have bet on it. That day the Power played Richmond in front of a lowly crowd of 16,000 and recorded its lowest AFL score of 3.12.30 (which was broken in 2011 during the two-week patch where they lost by a combined 303 points). Yikes!

But back to that cup of coffee and the main reason this celebration means so much to Port Adelaide. It was 2010, when club great George Fiacchi – whose vow on the 1990 SANFL premiership dais that “there will always be a Port Adelaide Football Club” was looking dicey – contacted his great mate and fellow club legend Tim Ginever for a coffee. It was over this chat, where the “OnePAFC” campaign was conceived; a campaign that ultimately saved the Power and the Magpies from financial peril and resulted in the revival of the Port Adelaide Football Club.

Contextually, when Port Adelaide was elevated to the AFL in 1997, after earning its AFL license in 1994, the SANFL, who owned the club’s AFL license, forced the club to spilt into two separate entities. This was to ensure the Magpies, who drew the largest supporter base in the SANFL, continued to participate in the state competition. Therefore, a new football club known as the Port Adelaide Magpies Football Club (PAMFC) was established in 1997 and competed in the SANFL, while the traditional Port Adelaide Football Club moved to the AFL. The PAFC-PAMFC era had a detrimental impact on the club financially due to a disastrous business model that pitted the club against itself and resulted in a significant identity crisis. This became particularly apparent after the Magpies’ success of the 1990s dried up and the Power began to struggle in the AFL after their infamous 2007 Grand Final loss.

Tim Ginever remembered the chat that spawned the OnePAFC Campaign in a video uploaded to the club’s website.

“We go and meet; we have a coffee. He (George Fiacchi) says, ‘you and I are going to have to pick this up.’”

“‘We are going to run a campaign, on our own, telling people to sign up for an online petition to say the Magpies have to survive and the only way is to bring Port Adelaide back together.’”

In 2010, after the success of George Fiacchi and Tim Ginever’s OnePAFC campaign, the Power and the Magpies merged off the field. It was one of the most significant steps towards reunification in the club’s recent fractured history. The merger took place nine years after the Magpies received approval to train at Alberton Oval once a week in another historic moment in 2001.

Since the 2010 administrative merger, the club under the guidance of CEO Keith Thomas and Chairman David Koch, who were both instrumental in saving the club’s AFL license in 2013-2014, the club merged its football program at the end of 2013.

This meant that on and off the field, Port Adelaide was finally one club again. However, it was still presented as two distinctive and separate brands. The club’s 150th anniversary was the perfect opportunity to change this, and the club has taken it.

The slogan behind the OnePAFC movement was “One History, One Future, One Club” and finally you can add “One Logo.”

George and Timmy, your work here is done, because Port Adelaide is back together again.

And may they never be torn apart again.