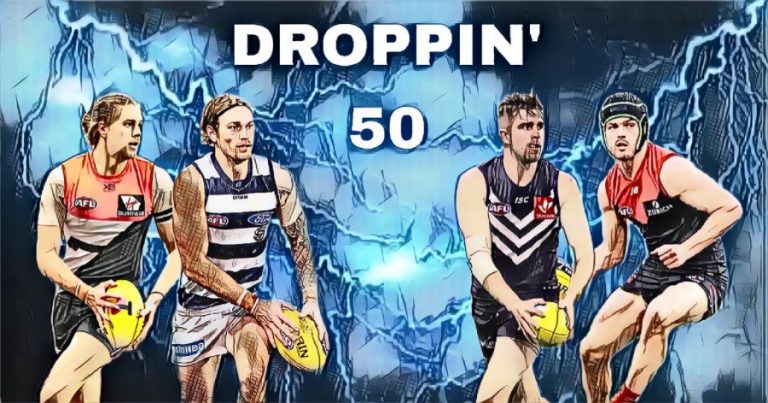 Can you believe it’s been over a year since I updated this ‘Dropping 50” concept?

Can you believe that most of you haven’t heard of it?

Can you believe I am going to tell you about it and you’re going to think ‘Hey, that is pretty cool… I should become a member here and support this bloke to provide innovative and sexy ways of covering footy’?

Yeah, the last one is a stretch, I know.

Anyway, are there Monty Python fans amongst the Mongrels that read this? I sure hope so, or I hope that you’ve at least watched Monty Python and the Holy Grail at some point, otherwise the next line will be totally lost on you.

“Fifty shall be the number thou shalt count, and the number of the counting shall be fifty..”

Well, I am always in search of ways to accurately rate the individual games of the players who seem to dominate, and listening to a basketball podcast a few years back, I heard someone talking about a simplistic way of assessing the value of an individual on a game of basketball. They used the number 42 as a cumulative measure of stats that indicates whether a player had a significant influence on a game. The higher the number, the more influence on the game that player has had.

It’s a relatively simple equation in a sporting landscape that tend to over-complicate matters at every turn. Points + Rebounds + Assists + Steals + Blocks = the total score of an individual player. If you’re tracking at a score of 42 points or over, you’re performing well. If you’re under, you’re probably playing a role and not a genuine star of the game.

I got to thinking about how I could apply a principle so simplistic to our beloved game, and whether there’d be any merit in it.

This is not meant to be some sort of revolutionary idea – more thought usually goes into ideas of that nature. It’s just a novelty kind of stat that may be of interest to some. Save the “you’re Americanising our game” stuff, please. If you don’t like the little more outside the circle stats, you may as well stop reading.

However, if you’re still here, congrats! You’re not a knob.

In regard to getting a simple game score for Aussie Rules Football, I started thinking that if we simply add possessions, tackles, marks and goals all together, we may get a total number representative of the impact a player had on a game, or at least his standing in the game as compared to his peers?

I hit a couple of snags initially, as midfielders pick up a ton of possessions, and in the case of Tom Mitchell, or Lachie Neale, could have 50 points in possessions alone. Remember the start of the article?

But how about if we counted only effective disposals?

Hmmmm, that throws a spanner into the works of the players that throw the footy on their boot and hope for the best.

I thought Mitchell would make the cut in this game. It seemed as though he was more or less over the line before he started, with the possessions alone. However,the elimination of ineffective disposals had a significant impact on his total score. He scored 48 total points, falling short by two, due to inefficiency with the ball, with “only” 36 of those 54 considered effective. He also only laid two tackles for the game.

However, his second 50-disposal game of the year in 2018 got him to the mark as a result of hitting the target with 80% of his disposals. Not only did he get to 50 points with the game that returned 40 effective disposals, nine marks and 13 tackles, he also smashed through the 60-point barrier as well.

Let’s take a look Clayton Oliver’s season-high for disposals and see how he stacks up. It came in Round Ten and comprised of 45 disposals. He would have had to have gone close, right?

30 of Oliver’s disposals were deemed effective. He had five marks, six tackles, and failed to hit the scoreboard. That amounts to a score of 41. Sorry, Clayton – not this time. Nor did he get it with his 43 touches in Round 13. He went closer, but managed 46, with 35 effective touches, seven marks, three tackles, and a goal.

The 50-point game remains one of the more elusive stats to gather for the Demons star.

How about Darcy Parish? He had a couple of monster games for the Bombers in 2022, right?

Well, yeah… but he is not going to trouble us here. You see… and this may be tough to hear for adoring Bomber fans, but he doesn’t tackle enough. He didn’t crack 40 this season, let alone give 50 a shake.

How about the game where James Sicily took 17 marks in Round 23. Well, I love Sic, but this wasn’t good enough, either. He finished with 43 (24 effective disposals, 17 marks, two tackles, no goals). I feel like an All-Australian selector…

So, come on Mongrel! Enough of telling us who didn’t make the cut – who the hell has topped 50 points in 2022? It sounds like a wasteland!

Well, Tom Stewart did it this year – as a matter of fact, like a good lover, he took a bit of time to recover and did it twice!

The first came in Round Seven, when he notched 32 effective touches, 14 marks, and four tackles to hit 50 exactly, and he backed that up four weeks later with 34 effective disposals, 16 marks, and one tackle. What a footballer, he is!

Next up, the highest scorer of the season, Harrison Himmelberg.

What? Did I read that correctly?

I sure did. Himmelberg had a party after being switched to defence, and roamed around wherever he felt like in Round 13 as he collected 35 effective touches, 15 marks, and two tackles for his first-ever score of 50+.

Another half-back, Angus Brayshaw, made his mark early in the season, with a 20-mark game, which also included 29 effective disposals and one tackle, to squeeze in with a 50.

And finally, Freo’s Luke Ryan added his name to the list, with 31 effective disposals, 15 marks and four tackles in a defensive showcase against the Dogs in Round 21. I’m a big fan of Ryan, so I was rapt to see him reach this number. Like Tom Stewart, he is a footballer’s footballer.

So, do we need to go historical to find some more company for the four blokes who managed to reach the target in 2022? Let’s take a look back

How about Wayne Carey’s 31-possession, 11-goal effort in 1996? Sadly, there are no advanced stats available for that game, but if we assume, naively, that all of Carey’s 31 touches hit a target on the day, he clocks in at 61 points. Sadly, I’m not going to count that in here, as if we can’t discount his ineffective possessions, we probably shouldn’t be deducting them for Stewart, Ryan, Himmelberg, Angus Brayshaw and company in the list below. And I’m not here to make reaching this mark easier. You don’t install an escalator on the side of the mountain to help the old blokes, right?

The Little Master chimes in with a 50-point game, though, courtesy of his career-high 52 touches against the Pies in 2012. 37 of his 53 touches hit the mark, dropping him down from 68 points to 50 overall. He added nine marks and six tackles.

Another Cat, Steve Johnson, went for 51 against the Dees in an absolute massacre in 2011. Not only did Stevie J have 31 effective disposals, seven goals, nine marks and four tackles, he did what only he has ever done, and added a record 10 goal assists to the stat-line as well. Unbelievable.

More recent additions come from Stephen Coniglio, who added 30 effective touches, 13 marks, eight tackles and three goals for a total of 54 in Round 11, 2019, and Lachie Whitfield, who had 56 in Round 9, 2019, comprising of 31 effective disposals, 18 marks, three goals and four tackles.

Below is the list we’ve come up with. Feel free to list any we’ve missed along the way and we’ll add them as we go.

A few of you threw Nick Riewoldt’s 26 possession, 21 mark and nine-goal effort in 2016 out there as a possibility the last time I updated this column. Close… but no cigar. He had only one tackle, and only 16 of his disposals were considered effective, for a grand total of 47.

Interesting that this year, four defenders made the list this year and no mids. Haven’t had that happen before – it has been quite midfield-dominant to this point.

Dropping 50 now sits as an elite indicator in the Mongrel Stats realm. You can have a look at all our weird stats HERE.

Who will be next, and who have we missed? Let me know.

Stanton notching two may come across as surprising to some, particularly given the heat he’d receive from Bombers supporters at times, but he is the in here twice and makes an appearance in as one of the five players to ever notch a Quadruple Double (double figures in kicks, marks, handballs and tackles in the same game) since stats have been kept.

TEAMS WITH THE MOST 50+ PLAYERS

The Hawks have five, with four of Tom Mitchell’s 50+ games coming in brown and gold, and one from Josh Gibson, as well. The Cats, by virtue of the double from Tom Stewart in 2022, leap into equal top place. The Blues are third with four, courtesy of two from Kade Simpson, and one each from Sam Docherty and Bryce Gibbs. They’re tied with the Giants are also getting in on the action, with Harry Himmelberg bumping them up to four, as well.

Just two teams have never had anyone register this stat – The Crows, and Tigers are all yet to have a player crack 50.

WHERE ARE THE FORWARDS?

It seems it’s pretty difficult for forwards to make the cut, doesn’t it? But Stevie J’s inclusion indicates it can be done.

A few of you threw Nick Riewoldt’s 26 possession, 21 mark and nine-goal effort in 2016 out there as a possibility. Close… but no cigar. He had only one tackle, and only 16 of his disposals were considered effective, for a grand total of 47. Sorry, St Nick…