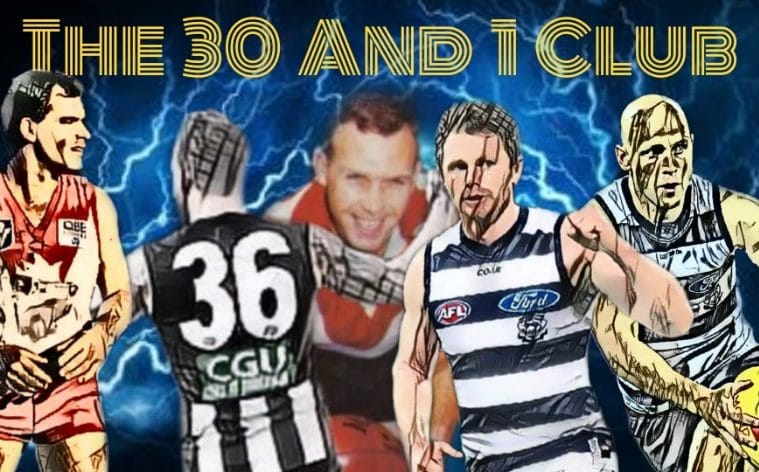 Taking a quick break from the season previews, as something caught my eye. I love my stats – historical ones, in particular. And here, I may have found a beauty.

Dusty has never pulled this one off. Nor has Christian Petracca, Marcus Bontempelli, Lachie Neale, or Tom Mitchell.

I don’t know about you guys, but growing up, if a player had 30 touches in a game, it was considered a spectacularly good effort. I used to marvel at the way Diesel Williams would find the footy – just in the right place at the right time seemingly all the damn time. And then he’d run forward and slot a goal or two as well.

However, doing it consistently enough to average 30 touches and a goal… that was something else.

In a time before the internet, you’d have to scour books and mull over numbers to find players who had achieved this milestone. Amazingly, back then, there were not too many.

This is very much a stat that leans toward the modern player. Averaging 30 these days is not so amazing. Just last season, there were seven players who finished with an average of 30+ disposals, including four players above 32 touches. It is now the barometer (with all respect to Rhys Mathieson) as to whether an accumulator has done his job. Tom Mitchell, Jack Macrae, Clayton Oliver, Ollie Wines, Zach Merrett, Rory Laird, and Darcy Parish all had great numbers in 2021, but when we combine those disposal numbers with scoreboard impact, the closest any of them got was 0.44 goals per game.

That was Clayton Oliver. He was good, but he was;t good enough to get into the 30 & 1 Club.

This is an article for our members. Just taking a quick break from the Season Previews to provide some more content for supporters of all teams. The Mongrel does the work… always. Want to join us?