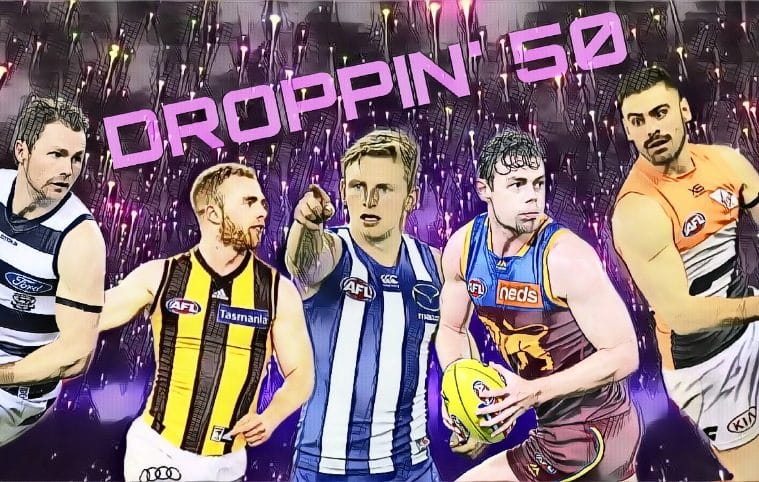 Can you believe it’s been two years since I updated this ‘Dropping 50” concept?

Can I believe that most of you haven’t heard of it? Well, yes… yes I can, given we’ve now got over twice as many readers as we did two years ago.

Anyway, are there Monty Python fans amongst the Mongrels that read this? I sure hope so, or I hope that you’ve at least watched Monty Python and the Holy Grail at some point, otherwise the next line will be totally lost on you.

Well, I am always in search of ways to accurately rate the individual games of the players who seem to dominate, and listening to a basketball podcast a couple of years back, I heard someone talking about a simplistic way of assessing the value of an individual on a game of basketball. They used the number 42 as a cumulative measure of accumulated stats that indicates whether a player had a significant influence on a game. The higher the number, the more influence on the game that player has had.

This is not meant to be some sort of revolutionary idea – more thought usually goes into ideas as of that nature. It’s just a novelty kind of stat that may be of interest to some. Save the “you’re Americanising out game” stuff, please. I actually don’t like the culture around US Sports at the moment and would hate to see our sport head that way – this is just a bit of fun. If you don’t like the little more outside the circle stats, you may as well stop reading.

However, if you’re still here, congrats! You’re not a knob.

In regard to getting a simple game score for Aussie Rules Football, I started thinking that if we simply add possessions, tackles, marks and goals altogether, we may get a total number representative of the impact a player had on a game, or at least his standing in the game as compared to his peers?

I hit a couple of snags initially, as midfielders pick up a ton of possessions, and in the case of Tom Mitchell, or Lachie Neale, could have 50 points in possessions alone. Remember the start of the article?

But how about if we counted only effective disposals? Ahhhh, thjis may throw a spanner in the midfield works.

I thought Mitchell would definitely make the cut in this game. It seemed as though he was more or less over the line before he started with the possessions alone, but the elimination of ineffective disposals had a significant impact on his total score. He scored 48 total points, falling short by two due to inefficiency with the ball, with “only” 36 of those 54 considered effective. He also only laid two tackles for the game.

However, his second 50-disposal game of the year in 2018 got him to the mark as a result of hitting the target with 80% of his disposals. Not only did he get to 50 points with the game that returned 40 effective disposals, nine marks and 13 tackles, he also smashed through the 60-point barrier as well.

Make no mistake; registering 60 points is no Mount Buller in terms of statistics – this is an Everest. I am struggling to find those who’ve hit 50, and Mitchell notched a 62.

Ten goals and ten marks are a nice start, but Big Josh only laid one tackle, and had 15 effective disposals for the game. His total was just 36. Way off the mark.

How about Darcy Parish? He had a couple of monster games for the Bombers this season, right?

Well, yeah… but he is not going to trouble us here. You see… and this may be tough to hear for adoring Bomber fans, but he doesn’t tackle enough. He has been lucky to crack 40.

How about his teammate, Zach Merrett? The guy is a running machine, and his Round 15 effort against the Dees looked as though he may give things a shake. Alas, he, too, fell short. Merrett had eight tackles and five marks, but failed to hit the scoreboard. He had a ton of effective disposals, but still managed just 45 points.

How about the game where Darcy Moore took 19 grabs back in Round Eight? Well, he was playing in defence (following the failed forward experiment… remember that?) so goals were automatically ruled out. He also laid just one tackle, so when you combine his 19 grabs with 24 effective disposals and just the one tackle… maths time… you get 44. Sorry, Darcy… not this time.

So, come on Mongrel! Enough of telling us who didn’t make the cut – who the hell has topped 50 points this season? It sounds like a wasteland!

Well, people scoffed at Jack Ziebell earlier in the season, didn’t they? They criticised his role, the way he was playing, and his penchant for trying to do everything for the Kangaroos… like he had much of a choice in their injury-depleted line-up.

But what he could do was rack up some huge numbers, and hit targets.

In Round Six, he had 34 effective disposals to go with 14 marks and five tackles. Ding Ding Ding! We have a winner. That adds up to 53 and gives him a place on the all-time list alongside names such as Dangerfield, Coniglio, and Ablett.

Is it starting to hit home how hard this number of 50 is to achieve? Merrett, Moore and Bruce had massive games and couldn’t get near it, but Ziebell… well, he didn’t even need goals to crack the right number.

The most recent player to top 50 before Ziebell was Lachie Neale in Round 23, 2019 – the reduced game time of 2020 didn’t just provide garbage, defensive contests, but also rendered statistical information for that season largely redundant.

So, do we need to go historical to find some more company for Ziebell? Let’s take a look back

The Little Master chimes in with a 50 point game, though, courtesy of his career-high 52 touches against the Pies in 2012. 37 of his 53 touches hit the mark, dropping him down from 68 points to 52 overall. He added nine marks and six tackles in that game, but did not hit the scoreboard.

More recent additions come from Stephen Coniglio, who added 30 effective touches, 13 marks, eight tackles and three goals for a total of 54 in Round 11, 2019, and Lachie Whitfield, who had 56 in Round 9, 2019, comprising of 31 effective disposals, 18 marks, three goals and four tackles.

It seems it’s pretty difficult for forwards to make the cut, doesn’t it? But Stevie J’s inclusion means it can be done.

A few of you threw Nick Riewoldt’s 26 possession, 21 mark and nine goal effort in 2016 out there as a possibility. Close… but no cigar. He had only one tackle, and only 16 of his disposals were considered effective, for a grand total of 47.

Dropping 50 now sits as an elite indicator in the Mongrel Stats realm. Along with the Quadruple Double, and the 150/100 club, it is a statistical milestone very few men manage to reach.

Who will be next, and who have we missed? Let me know.