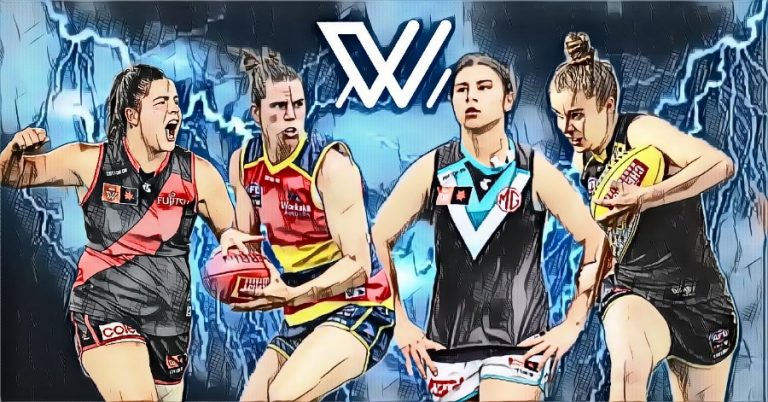 Week Three of the AFLW season was a weird one.

We saw a couple of blowouts, as the impact of expansion really started to hit one, and some real slogs, with the scoreboard reflecting a soccer game more than Aussie Rules (Geelong and Collingwood… looking at you).

Anyway, enough of my rambling – onto the standouts from this week.

On a night where the Dogs’ saluted Ellie Blackburn’s 50th game for the Bulldogs, it was her running mate Kirsty Lamb that stole the show for the Dogs.

There were some great contributors to the win; Blackburn in her milestone game was brilliant as always, Gabby Newton is finding more confidence in the air and the work of Issy Grant in the last quarter will go down as another turning of the page in her development as a player.

But Lamb was the big one, think back to last time these two sides met and Kiara Bowers faced a two-match suspension for a cheap shot on Lamb off the ball. Lesser players could’ve found themselves shaken a bit coming back against the same side, but Kirsty Lamb is no lesser player.

She broke out last season with her first All-Australian selection and this season has shown that there will be very little slowing her down. In amongst stoppages and in general play, she had an enormous presence; she finished with 23 disposals (10 contested), six clearances, five tackles and 394 metres gained.

But it was the fact she stood tall in a few big marks late in the game when the Dockers made one last push is something that will stand out from the fallout of this game. Her evolution of a role player in this Bulldogs midfield to a genuine midfield stud is something we’ll be talking about until the end of time.

While Marinoff, Hatchard, Gould, and Ponter all had very good innings, it was Chelsea Randall who tore the heart out of North Melbourne. Her run-with role on Jasmine Garner was superb. Up to half time Garner was leading all comers with 19 disposals and was driving North’s ball movement. After the half she had five touches. Randall rarely gave Garner space and every tackle brought her to ground. That may not seem like much, but if you want a taste of it, just lay on the floor and stand up twenty times in a row, you’ll soon see it’s a bit less fun than you thought it might have been. Plus while Garner is on the ground for that moment, she’s not chasing the ball or being an option in a handball chain. Brilliant job from Randall, and very smart tactics from Adelaide.

But the best taggers also hurt the opposition once they have the ball, and Randall did that as well. Six clearances, 18 touches and four intercepts is a fair day for anyone, let alone a player minding the opposition’s most dangerous midfielder.

There will be a few players hoping that Matthew Clarke doesn’t send Randall their way in the coming games, led by Jaimee Lambert as she prepares for the challenge next week.

One of the biggest things that have impressed me about the Giants thus far in the season is how many different avenues to goal they’re finding that don’t involve a giant mythical Irishwoman named Cora Staunton.

The Giants are finding capable players to hit the scoreboard and one player that will have all of New South Wales talking this weekend is the debutant in Zarlie Goldsworthy. There are a few of us footy scribes – namely Alex Catalano and I – who were big on Goldsworthy during her under-18s campaign this year.

With no disrespect to Cynthia Hamilton, who I’m sure will forge out a very good career in her own right, but why would the Swans not select her with their opening three picks? Zarlie is a brilliant small forward that many clubs would be dying to have.

With a little bit of composure, Goldsworthy could’ve finished with four or five debut, but 2.3 from her nine disposals and seven score involvements is also a very sound reminder of the potential she has in terms of finding the goals.

She also had four tackles, three of which were inside the Giants’ attacking 50, so she also brings a good level of forward pressure that’s required to succeed in the AFLW – surely you’d think she holds her spot in this team next week?

In a battle of two undefeated sides with solid defence, the Pies edged the Cats by four points. There were numerous players from both sides who had significant influence. I could have written about Amy McDonald or Georgie Prespakis again, or Ruby Schleicher or Lauren Butler from the Pies.

Ultimately, it came down to Mikala Cann and Olivia Fuller. Most will write about Cann and the impact she had on the spread and around the contest, however, I’m choosing to not select a midfielder and go with a ruckwoman.

Fuller only had the 9 disposals, but her impact was bigger than that. She regularly brought the ball to ground if she couldn’t mark it, she was laying tackles (5) and, up against multiple opposing rucks, she had the equal most hit outs with 20. It wasn’t just the volume of the hit outs, but also the effectiveness. On numerous occasions, Fuller was able to tap the ball either directly to or into the path of her teammates. She was able to nullify her opposing rucks – all who have significantly more experience than her.

Fuller was great all day and provided options down the line and, even despite being a ruckwoman, was able to impact on the ground as well, regularly being an extra at contests, even if she wasn’t always clean when attacking the ball.

There were so many players I could have picked to occupy this spot, with the Lions absolutely dominating the Suns in every conceivable way… on a footy field, at least.

Players like Orla O’Dwyer and Jade Ellenger were excellent on the outside, the mids of Double-A Ali Anderson and Emily Bates tore it up, and Jesse Wardlaw snagged four goals, including one she pinched of Belle Dawes, but she did give another away.

In the end, I went with Phoebe Monahan who gave a very solid four-quarter game, intercepting and rebounding with apparent ease. Her work in combination with Breanna Koennen repelled just about everything the Suns could throw at the Lions, with Monahan seemingly able to find the time to sit down, have a cuppa, and have a good, hard think about what she wanted to do with the footy before disposing of it.

This was a slaughter, and Monahan relished the opportunity to zone off and find space all day.

So much was made of the big signings at Port that people have forgotten about where the future lies within the squad. Yes, I understand how important getting Erin Phillips was for the culture of the club, and Gemma Houghton will be great when she gets on the park, but this girl… this is the girl that will aid the Power build a winner.

After a decent start to her career, notching two ten-disposal games, this was the game that Hannah Ewings stepped up to show what the future holds.

She had 18 kicks amongst her 21 disposals, with clean hands and a direct style of playing the game, which will no doubt have her forwards loving the chance to play footy with her. Taken at number three overall, Port would be ecstatic with what they saw from their prized selection, as she s undoubtedly a pillar they can build around over the next several years.

Apologies to Blues fans – tough not to get a mention when you get two of the four points on offer – I really liked the output of Keeley Skepper again – you’ve found one, there. And Kerryn Peterson was instrumental in just about everything the Blues did well for the contest. She continues to be a great player for the club.

The Melbourne midfield just continues to grow and develop, and right at the forefront of this group is the hustling, bustling Eliza West.

She has commenced 2022 in excellent form, winning hard footy after hard footy and throwing herself into every contest as she has seen her average jump to 20.7 disposals per game over the first three weeks of the season. That is +7.9 on her output from last season as she has evidently started working on her tank to run out four quarters of footy.

What I love best about West’s game is her ‘take no prisoners’ attitude. Some call it “see ball, get ball”, but to call it that does an injustice to her game. She immediately looks to bring her teammates into the game whenever she finds the footy and is starting to make those around her better players.

The Dees had plenty of quality contributors, as you’d expect, but through the first couple of quarters, I was leaning toward the work of Kate Hore. She was integral in setting up the six-goals first quarter for the Dees, which was enough to win them the game, but in the end, the continued excellence of West won me over.

Plenty of Richmond players you could raffle here: Monique Conti was the best on ground, but she’ll get her high praise from various other media outlets.

I really liked Eilish Sheerin’s game too – 12 intercepts and a lot of times where she was able to push further up the ground to gain territory, she even got a shot on goal off in the last quarter, only to register a behind. Yes, she was big in this game too.

But Ellie McKenzie is someone we’ll be talking about in the next decade as a player who is one of the silkiest players in the competition. Down at Punt Road, we saw it bucket down in the second half and McKenzie’s work rate and skills with a slippery football didn’t deviate the slightest.

The highlight was watching McKenzie chase down a Hawthorn player inside the forward line to win a free kick and a shot on goal, which was from a very difficult angle, and to nail it through via a drop punt almost says everything you need to know about how good McKenzie currently is and where her ceiling will be down the track.

She finished with 1.1 from 16 disposals, five marks (two contested) and six score involvements at 69 percent efficiency is a very good return. Players often fumble the ball in the dry conditions, but she was a class above when the heavens opened up.

Scoring the 2020 AFLW Best and Fairest winner and All Australian has been a massive coup for Essendon and is a big part why the inaugural club has got off to such a great start winning two of their first three games. I don’t understand why Eagles coach, Michael Prior, didn’t put a body on Prespakis from the get go. Any time the ball was there to be won, she was there, winning it at the coalface or breaking through the lines with ease and helping provide her forwards (like Wales who kicked three) with opportunity from fast transition. Even after a nasty knock to the shoulder that looked like ending her day early, Prespakis was able to accumulate 22 touches, 4 tackles, 3 clearances and 2 goals to really put the boot into an insipid West Coast side. Despite her toughness and her physicality, what was most impressive was her gut running. Early in the second half, Madison ran from the centre square to inside 50 to receive a handball that she was able to convert for her second goal. It was the kind of hard running you saw all day from Prespakis and her opponent simply couldn’t not keep up. It’s only three games into the season, but Prespakis is already tracking career-best numbers and if she continues to impact games like she did in this hit-out, another All-Australian nod is on the cards for the former Blue.