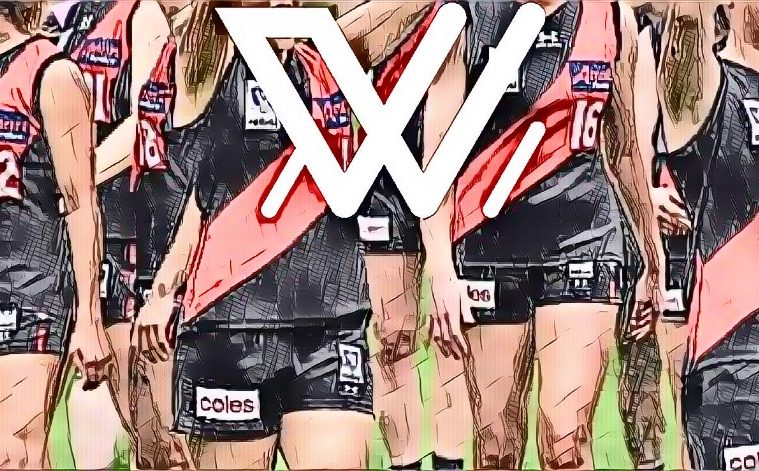 AFLW: Can The Bombers Fly Up To Finals In Their Debut Season?

They were the best team in the VFLW all year long; 12 wins and two draws in the home and away season and three massive wins with an average winning margin of 51 points en route to their maiden VFLW premiership.

What’s next for the Essendon Football Club is just how far they can take their AFLW team in their first year of the competition?

I’ve had the privilege to call a good handful of Essendon games this year in the VFLW for WARF Radio and every time I’ve watched them, I couldn’t help but be in awe of their professionalism and how methodical they’ve gone about their football at all times.

In their premiership triumph, they were ruthless in dismantling a Southern Saints outfit that ran them to the wire twice earlier in the year. They suffocated them around stoppages, denied them so many opportunities to run the ball and made them pay for their turnovers with clinical finishing.

Of their AFLW list heading into season seven, ten of their VFLW listed players are on the books – 13 if you count Olivia Barton (Port Melbourne), Jorja Borg (Carlton) and Steph Wales (Casey) who played at other clubs prior to being signed or drafted.

You don’t need me to tell you that out of the four expansion clubs, Essendon were the ones who went the hardest in the off-season and reaped the rewards with a list that should contend for a spot in the top eight.

The task of making finals in their first season would’ve been a job made easier if Georgia Nanscawen, co-captain of the VFLW team this year, hadn’t ruptured her ACL in the fourth quarter of the Grand Final.

Football has often shown it can be cruel and heartless at times and given her path to get back onto an AFLW list (ex-North Melbourne), to see a player of Nanscawen’s calibre go down at a point in the game where it was sewn up was truly heartbreaking.

We’ll see her back out there in 2023, but the Bombers will undoubtedly miss her grunt work around the stoppages and her ability to spread both out of congestion and when the Dons rebound off the turnover, the buck often stopped with her when the Bombers got going in the VFLW this year.

Her year was rewarded with a club best and fairest in their premiership year and I’d dare say she’d be right up amongst the front runners when they do their league best and fairest count, given what she does for the club and the level of consistency she maintains.

Despite that, I’m still confident that the Bombers’ midfield unit can contest with a lot of the sides in the competition. The Bombers went out and got Maddy Prespakis as the one that will lead the way out of the middle from Carlton and given her resume in such a short period of time at Carlton, building a midfield around her will be key to the Bombers’ fortunes in season seven.

Alana Barba won the Lisa Hardeman medal as the best player on the ground in that Grand Final and could be the one that firms for a breakout year. She barely saw an opportunity at the Suns and when she did play, looked out of her depth playing in another position, but it’s in the middle of the ground where she can excel and find a niche role to help out Prespakis.

Her tackling pressure in the Grand Final was second to none and it was a key factor in their triumph, but she can also win the ball direct from stoppage and that goes a long way to helping out the rest of the team.

The Nanscawen injury also opens the door for some of their VFLW-listed players. Think of Amelia Radford, who has only just recently switched from soccer to the rapid rise of debuting in the Essendon District Football League last year to a critical part of their VFLW premiership side this year.

Her ability to show poise in the stoppages and display good kicking skills has been very close to being super consistent this year and in the manner, she played during the finals campaign this year, there was very little surprise that the Bombers drafted her – I expect she’ll play some solid minutes somewhere this upcoming season.

It also provides an opportunity for a player like Jordan Zanchetta to finally break through and offer up something in this competition. Having been an ex-Brisbane Lion, she has struggled for opportunity since being drafted, but has since been a very solid and consistent contributor for the Bombers in their VFLW program this year, excelling at winning ground ball and a strong tackler in congestion too.

But there is scope to play others there for small stints, we’ve seen Steph Cain play some minutes in the centre bounce this past season, Georgia Gee can float through the midfield as well.

Yet, the big question is how much midfield time will we see their top draft pick Amber Clarke play in the new season? The body of work she’s compiled at Under-18 level suggests that she will be a top-line midfielder in due time, having won the NAB League best and fairest this past season.

She can win enough of the ball on the inside, but it’s her impact on the scoreboard that made her such a tantalising prospect, nearly averaging two goals per game for the Stingrays in the NAB League this year. The Nanscawen injury means there’s a chance she could play a little more in the middle next season if that’s the path that Nat Wood chooses to go down.

The Dons have a plethora of scoring options to go with; Clarke will most likely spend more minutes forward than midfield, but you’ve also got Bonnie Toogood, Daria Bannister, Jess Wuetschner, Federica Frew and Renee Tierney as well who have all proven at one level or another that they are great finishers in front of goal.

Caitlin Sargent as well, who was picked up early in the off-season by the Bombers as an open-age signing has shown as an over-ager this year at the Western Jets that she has the hallmarks of being a very dangerous partner-in-crime to Bonnie Toogood as key forwards.

Three goals in a championships game for Vic Metro this year, as well as averaging 2.1 goals per game for the Jets this season in the NAB League are very good numbers, but she’s shown that she is also a very solid pressure footballer as well; she averaged 3.4 tackles per game this year as a key position player this year.

Out of the group I’ve mentioned above, I see Frew as one of the big wildcards to how Essendon’s fortunes will play out in season seven.

As a mid-sized forward, her knack for goals is right up there with the best I’ve seen in women’s football. She does a bit of everything; leads at the ball well, crumbing work is solid and she just knows exactly where she is inside the 50 when the ball is in her hands at all times and knows how to work the ball from any position inside the forward 50.

Even though the Bombers breezed through the opposition at times this year, you don’t win the Rohenna Young Medal for no reason. She kicked 35 goals for the year and no one else came close to catching her.

As we look at the defensive half for the Bombers, they’ve got great key defensive depth, with Ellyse Gamble as a solid lockdown player, whilst Danielle Marshall has shown all year at the VFLW level that her reading and understanding of the game has improved tenfold since her delisting from the Bulldogs at the end of the 2021 season.

There’s been a lot of talk about Sophie Alexander potentially being switched to a key defensive role, which isn’t a bad thing. I rate her marking ability and she can kick them long and sweet in front of goals, but her problem has been it’s been very inconsistent. Two or three goals one game is followed up by a game where she has only introduced herself to the ball maybe three or four times for the entire match.

They’ve got players who can run and rebound off the half back line too. Eloise Ashley-Cooper had a tremendous finals series in which she showed that she can mop up the ball in the defensive half and effectively use it and still being on the earlier side of her 20s, she’s got a lot of upside and room to grow.

Another player that I’m big on is Olivia Barton. Having had a very good year for Port Melbourne in the VFLW this year, Barton is someone who has got good size that enables her to play on both tall and small forwards, but she also has shown her ability to rebound out of the defensive half is good enough to see her on a half back flank.

And as well, they have Mia Busch, who also excels in both rebounding and one-on-one competition, and I wouldn’t be shocked if they handed her games early in the season as well.

Coached by one of the soundest minds in women’s football, Nat Wood has found success both as a player and coach – winning multiple premierships and club best and fairest awards across her near-200 game tenure at both Darebin and Melbourne University, before coaching Vic Country in the under-18 championships and then as an assistant coach at both Geelong and the Western Bulldogs.

The Dons will be aiming for finals this upcoming season and I genuinely believe that this is a good possibility. They may believe that they can push the better sides in the competition, but they’ve set themselves a good foundation the past couple of years with their VFLW program.

Preliminary finalists last year before the VFLW season was cancelled to the unbeaten premiers this year, they’ve done a lot right and entering in the AFLW with a winning culture is a good start to proceedings.

Their draw is kind, they will only play three of the top six teams from last season; Brisbane, Melbourne and Collingwood – they’ll see that latter one as very gettable and should be at the very least competitive in the rest of their games. Six wins is definitely not out of the question, but they will need to be wary against the likes of Geelong and Richmond, who have bolstered their list a bit since we last saw them.

Even if they win five games or less, I think that the Bombers have set themselves up for the best possible chance to be a powerhouse team in the AFLW sooner rather than later.