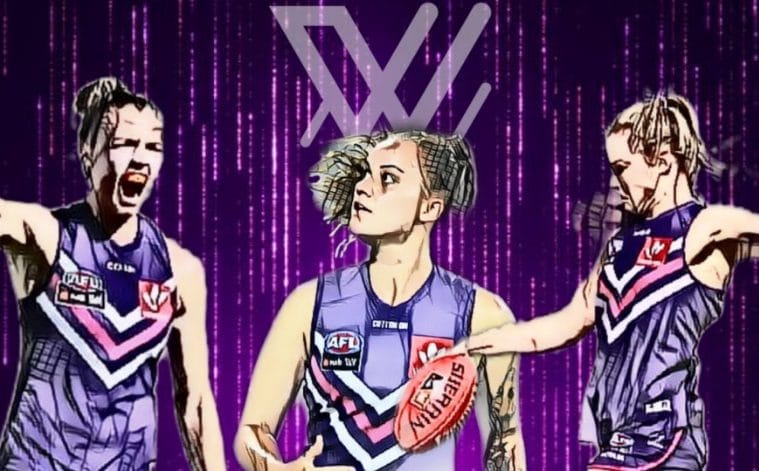 Let me start by saying that I thought that Tuesday night was the most vulnerable I’ve seen the Fremantle side this season.

Maybe it’s the short turnarounds that are slowly nipping Trent Cooper’s soldiers in the bum, but at 5-0 after four and a half weeks, the Dockers have done the hard yards early, forced to move away from home for at least a month due to WA’s current border restrictions.

It may even be more, but as of right now, they’re scheduled for a home game in WA against Carlton in round six, however, before they do that they’ve got to go past North Melbourne at North Hobart Oval.

I watched them on Thursday night dismantle a Collingwood side that are widely tipped by many to go far in the post-season. I had the Pies finishing up as the premiers in my pre-season predictions, but since that point, the footy gods thought it would be nice just to throw a spanner in their works with the season-ending knee injury to Bri Davey.

To say the Davey injury has set Collingwood back a step or two would be unfair on the rest of the side. At their home fortress that is Victoria Park, the Pies have proven themselves worthy adversaries for all those who stepped foot on the turf, having won their past eight matches on their home soil.

You can look at who the Pies have beaten, and possibly the only side worth noting is Carlton, but even then I am not rating them as highly as others right now, but that’s something for another occasion.

The Pies, up until last Thursday night, were travelling well. System-wise they’re very good setting up behind the ball and are one of those teams that do enjoy short-possession footy across the general play.

But the Dockers stifled them to the point where they could only go inside 50 just 10 times across the game and only notch two scoring shots to show for it.

It must be said that I’ve queried the Pies’ forward efficacy in the past and judging from that game it remains a big barrier to their premiership credentials, however, you must give full credit to the system that the Dockers have put in place.

I’m a Bulldogs supporter, and yes it absolutely pains me to see my girls lose by a kick the way it did on Tuesday night, but in the same fashion, the kind of resolve that the Dockers showed resembled that of a genuine premiership fancy. They’re a team that I just love to watch.

There will be plenty of eyes on the Adelaide team now too, following their dismantling of Melbourne on the weekend, but the Crows haven’t had to fly across to the Eastern Seaboard and base camp over the past month like the Dockers have had to.

We won’t get to see these two giants of women’s football take each other on for another few weeks yet – they’re currently scheduled to lock horns in Round Eight. But the way it’s panning out now, these two teams are setting the benchmark in women’s football this year, and it’s not hyperbole.

For the Crows, it feels like it’s business as usual, the stars are firing and those around them are lifting another level. However, the Dockers have had to work hard to get back to where they were in 2020 – where they went unbeaten before Covid wiped out the women’s season.

It’s genuinely hard to tell just how good those 2020 Dockers could’ve really been, but this 2022 Fremantle side look a side that is hell-bent on completing their ‘unfinished business’ that has been laid out to them since the end of 2020.

The first thing I think about when I talk about this Fremantle side – as I’m sure it is for many analysts – is their tackle pressure, it was again on display against the Bulldogs as they walloped them in the tackle count by 30.

I was told last year by Brendon Major, coach for Essendon’s VFLW team during one match broadcast for WARF Radio that tackling can be a double-edged sword, and it’s something that’s stuck with me since. It’s fantastic to see the pressure applied, but why are you applying the tackles?

Often, you’re applying tackles when you don’t have the ball. Currently the Dockers are averaging over 73 per game in 2022 but when you look at the contested possession numbers that they rack up, this theory starts getting a bit muddled.

Their fitness base has been well documented by both those inside the four walls at Fremantle and from the pundits on the outside, and we saw it on full display against both the Bulldogs and the Pies in the past week.

They love to create a press that enables teams to go and win the footy but gives them very little options and very little time to make use of the ball properly and then use their fitness to overpower sides in the last quarter.

Of their last quarters this season, the Dockers have kicked a total of 13.14 across their final terms in their five matches so far, take away the Dogs game and that’s 12.13 – there’s no denying that Fremantle are a team that can run out fourth quarters.

We all know that Kiara Bowers has been the cornerstone of their tackling pressure, but players such as Gabby O’Sullivan, Hayley Miller and Dana East are lifting their games to try and match the level of defensive presence that Bowers brings each game.

Even before the Bulldogs’ game, the Dockers are still the highest scoring side across the first four matches, averaging 52 points per game. But with that, there’s the small challenge of bettering their accuracy.

I got a comment from someone following my review of the Fremantle/Richmond game a couple of weeks ago that the Dockers have been playing with strong breezes, which in turn results in them kicking wayward scores.

It’s interesting to point out that of the 14 teams in the competition – Richmond is the only side that have kicked more goals than behinds so far this season, with GWS the next most efficient team in front of goal. Hard to believe that, right?

It’s something to consider playing with big gusts of wind – I’ve played many a game in the local level with strong winds and I can tell you from experience, it’s a nightmare of a time trying to play the short kicking, possession game. You’ve basically got to resort to something more of a chaos-ball scenario.

But I suppose the point I want to make here is that the Dockers are finding more avenues to goal than they were a couple of years ago. Gemma Houghton is a player that can be an elite key forward if she tidies her shots up, otherwise everything she does is top-notch – work rate, speed, positional IQ and she has got a very good understanding of playing to those strengths.

They’ve also got Hayley Miller, who is proving to be so damaging forward of centre – her work around the stoppages is as good as it’s ever been, but the fact that she has been able to hit the scoreboard so frequently this year has been a breath of fresh air for the Dockers.

It’s also refreshing to watch Ebony Antonio splitting her time as a wing option and as a key forward option. Her mobility and speed for a player that’s got the height to play as full-time key position option is just insane thinking about it, and that’s even before we get to her goal sense.

It feels like every week that we talk about Fremantle winning a game of football, we are talking about the kind of goal that Antonio kicked to help them get there. Against the Dogs she had to keep her feet in a contest against Sarah Hartwig and then to calmly slot that goal from a fair distance against the wind from a tight angle – that’s not something you can teach as a coach.

Last year, I quietly questioned Kara Antonio playing in the forward line, after having forged herself a very good career playing predominantly in the midfield, even before her AFLW days. But when she has played, she has brought a sense of composure and a different, yet still reliable avenue to goal that the Dockers can play through and enable them to kick a winning score.

We also saw a small sample of what Amy Franklin can do in the long term against the Bulldogs – her contested marking and finishing abilities in front of goal is something the Dockers’ supporters can look forward to over the next decade.

I could rattle on about players like Aine Tighe, Makaela Tuhakaraina and Dana East, but I feel I’ve already done that a little bit, but it’s a testament to the first-year players that have been able come into this team from the get-go, they have already proven to be incredibly invaluable to this side.

Take Ann McMahon for example – if the story about her journey to play her debut doesn’t grab and throw you on her bandwagon, then maybe her work rate and tenacity at the ball and the opposition might, because she’s just a player that plays like every game is her last, working to push herself to every contest she can and willing to put her body on the line to make sure the Dockers can get a chance to score.

Does the news about Janelle Cuthbertson’s latest injury setback worry the Dockers? Whilst Cuthbertson was dutifully rewarded for her work last season with a spot in the All-Australian side, playing as the key defender in a very strong Fremantle defence, the players around her are proving that they can still thrive in her absence.

Currently, the Dockers are conceding an average of 21 points per game, second behind Adelaide, who concede an average just over 15 points from their first four games.

I think of players like Laura Pugh, who is only starting to receive recognition, not just for her drive out of the defensive 50, but for playing the lockdown roles she needs to in order for the Dockers defence to operate functionally.

I watched last Thursday night as a Jess Low, a mature-aged player from Claremont in just her fourth career game, blanketed the game of one of the most dangerous forwards in the AFLW competition in Chloe Molloy. It’s just another example of a first-year Docker coming in and making an immediate impact inside the best 21.

Sarah Verrier is another player that has flown under the radar of many, but her positioning across the backline this season has been a move that I’ve enjoyed watching this season and has just only enhanced the defensive talent of this unit.

She’s a second-year player, but she positions herself behind play and uses the footy of a player that has been in this Fremantle system for a long time. We talk about the younger players coming through the junior pathways now more so than ever, but it is still remarkable to make that next jump to your individual game by thriving in an elite team.

To close this, I’ll say that this Dockers team overall has been really fun to watch so far this season, they’ve had a lot of things thrown in their way, but even just from watching their win against my Dogs last night, they’re a side that is embracing all challenges that come before them.

Don’t be surprised if we see this band of purple warriors take the stage on Grand Final day.