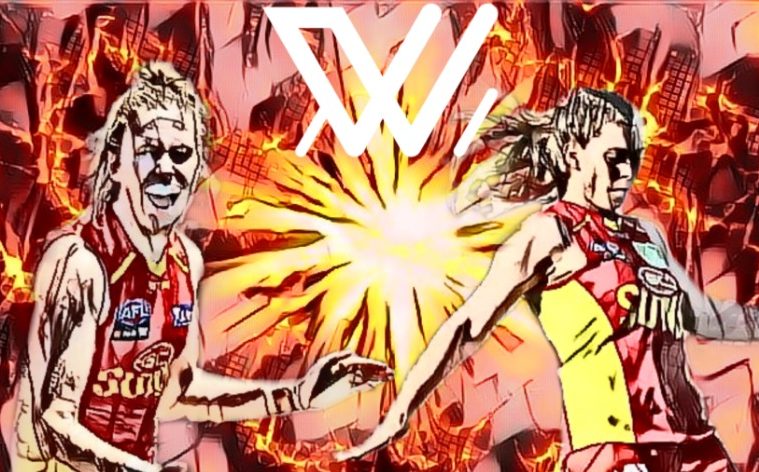 The Alex Docherty Column – The Return Of The Team Who Never Say Die?

When the Gold Coast Suns entered the AFLW competition for the 2020 season, I’d wager there would be a fair few opposition supporters that really thought nothing of their chances of really making a splash in their first season.

By the time Covid hit and wiped out the season, I could sense that the Suns team had picked up a few admirers from afar. I was one of them and speaking in the studios of Swinburne University with my A3 Footy Podcast colleagues at the time, I know both Alex Catalano and Alex Miller were both believers, too.

What made us believers in this team of unlikely players, is that they scrapped, they clawed, they fought and in between the hard and bruising times, were bright glimpses of magic from players such as Kalinda Howarth and Kate Surman, even watching the veteran Tiarna Ernst chase down players and tackle them to get the ball back was pretty special to watch.

What happened in 2021? Injuries had more than their fair share of impact and the team, at various moments, looked rudderless. They got belted in most of their games as a result.

As I watched Kate Surman – a delightful character as always – talk to Fox Footy after their massive come-from-behind win against the Eagles this past weekend, she noted that the club felt as if they’d lost a lot of respect for their winless 2021 campaign.

I certainly don’t blame them for feeling that way. Looking at their contested stats from last year, the Suns averaged over 21 clearances per game, 103.1 contested possessions per game and 59.2 tackles per game. Furthermore, they averaged 22.1 inside 50s per game, 35.4 marks per game

To give context for this, I’m going to use the two teams that they have played so far in 2022; starting with West Coast – 93.4 contested possessions per game, 20.8 clearances per game, 31 marks per game, 55.7 tackles per game and 22.1 inside 50s per game – so really, the Eagles were down on all these key stats except for inside 50s, which was the same.

I guess it’s also worth pointing out that in their corresponding fixture last year, West Coast beat them by a point, despite the Suns having more scoring shots.

Despite all of this, I watched the Suns and the Eagles clash on Sunday afternoon in my bedroom and after a dour first three quarters in which neither side allowed the other to gain any real clear ascendency, we saw the fourth quarter come to life, from both teams.

Mr Catalano and I had a brief discussion in our A3 Messenger chat about the game on Monday morning, and he was of the belief that despite the first three quarters being a slog, the final quarter goal feast more than made up for it and had the hallmarks for being the best game that he’s watched to date.

Up until three-quarter time, the two sides combined for 4.6 – it was far from pretty, but I think that was due to both sides applying extraordinary pressure around the ball and from that, the congestion makes for an ugly game, especially from two teams that are still on the way up.

The Gold Coast Suns look as if they’ve got their 2020 edge back. If the Suns were 16 points down midway through the last quarter in 2021, they probably would’ve lost by another two goals, possibly three. But the resolve from a number of their players from the moment Maddy Collier goaled to put the Eagles three kicks ahead was absolutely superb.

Even last week, when I watched them against the Giants, who have been historically a very good side in terms of their contested ball work and their physical approach to the game, they held up very well for most of the game.

Despite going down in the clearances by 15 and losing the contested possession count by 12, their defensive efforts were top-notch and at best, made sure the Giants were held accountable and forced them to play the game, at the very worst, on neutral terms.

To register 83 tackles is a very impressive number in the AFLW, especially against a side like the Giants who do pride themselves on contested footy. Against the Eagles on Sunday they recorded another 75 and astonishingly, beat the Eagles in this statistic by 18.

As it currently stands now, the Suns are only second to the Dockers in tackles this season, who average 79.5 tackles per game in their first two games, whilst the Suns aren’t too far behind – half a tackle per game, in fact.

Of course, it’s only a small sample size of two games and we’ve still got eight games to go before the home and away season concludes, but from what I’ve seen so far, the Suns are back on the right track.

They’re doing all the things that made all of us at A3 love watching them and had us coming back to watch them again the following week – a team that lives by their theme song of ‘never say die’ with their tackling pressure and desperation towards the ball.

Of course, their ball movement must be continued to be refined, and it might all sound like a bit of an overreach, considering the first two weeks have been against sides that resemble also-rans in the Giants and the Eagles, however, no one was asking the Suns to be world beaters in season one, they weren’t asking them to be world beaters last year or this year either. Getting back to where they were in 2020 and being that team that always made it hard to play against is what they should be aiming for and so far, it’s going great guns.

Before Christmas last year, through the connection of fellow Mongrel Brett Hodgson, we had Jamie Stanton on the podcast as a guest and we asked about the coaching styles between both current coach Cameron Joyce and David Lake – who stepped down at the end of 2021.

It was a pretty clear-cut response from Jamie, but a response I was very intrigued with. Lake was seen as more of a relationships-style of coach, in the sense of he’d allow the players to be themselves in comparison to Joyce, who Stanton said was more of a structure-based coach and sets the standard from the top.

You should go and listen to that, it was a very fun episode to do, if you already have, more power to you.

When I talk about the Suns’ victory, I always start with the middle, because naturally, games are won and lost through here and the addition of Charlie Rowbottom has already proven to pay off handsome dividends for the Suns, as evidenced on Sunday.

When you put her alongside stalwart Jamie Stanton and the impressive Ali Drennan – both well-rounded midfielders, Rowbottom’s hustle and bustle through the congestion is going to be a huge asset for the Suns going forward. Admittedly, the first three quarters were not pleasant viewing skills-wise, but that was because of the pressure-cooker style environment that both teams were playing.

Rowbottom went into quarter time with six of her 12 tackles coming in the opening term. When I studied her game last year in the lead-up to the AFLW Draft, the obvious standout factors were her midfield craft, her strength and her ability to push forward for a goal or two. However, one of the more underrated things is how much her tackling has improved.

Across the 2019 and the incredibly shortened 2020 season, Rowbottom averaged around two and a half tackles per game. In 2021, that averaged bolted up to 7.1 tackles per game in the NAB League as she was playing more time in the midfield.

I’m thankful that she got one of the two Rising Star nominations this week, because anything else and a lot of the AFLW supporters would be furious. I certainly would’ve been.

Further expanding on the midfield, Sunday was the best game I’ve seen from Ellie Hampson. Yes, the dangerous tackle cost her a week’s suspension, but I love players that are hard and physical towards the opposition, and I saw a lot of it with Hampson.

The forward 50 is interesting. The Suns have been more renowned for their physicality around the contest and for giving it a dip, but in their short history, have never really been a high scoring side.

In 2020, they managed to kick five goals in a game three times, which if you think about it, isn’t a bad thing first up and maybe part of why I enjoyed watching them in 2020, there was a sense of free-flowing approach inside 50 and watching Kalinda Howarth surge through games that they controlled, it was pretty fun to watch at times.

In 2021, they only managed to score 30 points or more twice. But on Sunday, they eclipsed the 40-point barrier for the first time in their short history.

Kate Surman is a player that I’ve admired from the start, with her energetic approach both on and off the field – don’t stop stealing those Fox Footy microphones, young lady! In all seriousness, analysts bypass the enthusiasm aspect of the game a lot, but Surman is one of those players that if she can get going, it can rub off on her teammates.

And it’s not like she doesn’t know how to play the game either, because she absolutely does. Her positioning as a crumbing forward is excellent, – the goal to put the Suns in front of the last quarter is a perfect example. She gets to the feet of the contest, a clean gather and the burst of speed to get around the Eagles player, goal. Forward craft the way it should be.

However, her game extends far beyond that of a small forward – she’s not afraid to push up the ground and get in the fact of the contest and it’s her ability to extract the ball out of stoppages. She is currently averaging seven contested possessions per game and on Sunday recorded ten of them from her 14 disposals.

On Sunday, that forward 50 belonged to Tara Bohanna. I’ve watched Bohanna a fair bit in the VFLW last year as a part of the WARF Radio team, and everything I saw out of her just screamed to me that she should be in the AFLW.

Her leading patterns were strong, she has a very good tank, and skills-wise it’s pretty good as it is; a great contested mark, a great set-shot routine and has the knack of pin-pointing the correct pass. Go back to the replay of the match, late in the third quarter where she takes the ball just outside attacking 50 and locates Lucy Single inside 50.

Not many AFLW players kick three goals in a quarter of football, but there is something special about Bohanna, but having said that, I’ve probably jinxed her for her next game.

I could go on and on about this Suns team; Jacqui Dupuy is a mature-aged tall ruck-forward who has already shown promising signs, Bess Keaney as vice-captain is progressing along well and despite the low number of possessions from both Ashanti Bush and Tori Groves-Little, I could feel their presence of both players inside 50 all throughout the game.

It’s a shame the Q-Clash has been postponed – I expected the Suns to really give it to Brisbane on Saturday night. It’ll be interesting to see how the Lions respond, both physically and mentally, when the sides do clash.

This Gold Coast side look to have rediscovered their mojo – you can be sure they aren’t going to make things easy for anyone in 2022 and beyond.