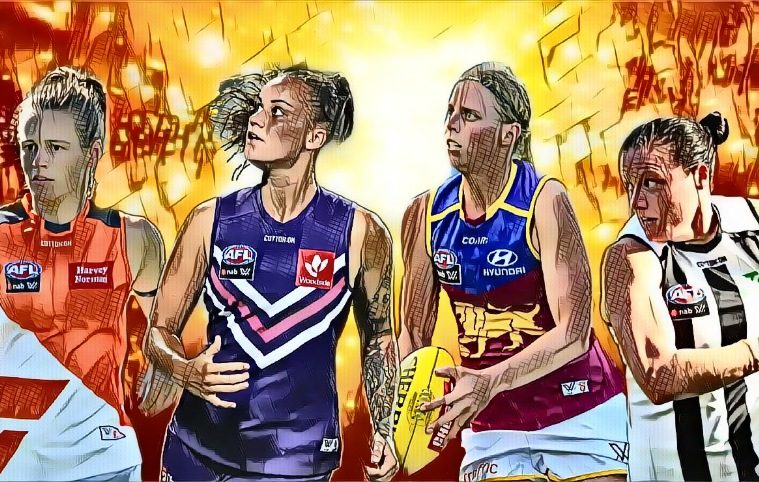 We’re five rounds into a nine-round season, so technically we’re over halfway through the home and away season?

Well, whichever way you look at it, it means it’s time to officially ring in the mid-season edition of the Rolling AFLW All Australian side. Through the first five weeks, we’ve seen the mainstays establish themselves as the first-picked week in and week out, we’ve seen players take big steps in their development and hold down their spot, and we’ve seen others play themselves in and out for the last few spots.

It’s been an arduous process so far this season, but in the same time, it’s been a fun challenge to do, so here is the Rolling All-Australian side.

Much like last week, I’ve brought in three changes to this side – two of them being inclusions for the first time this season, whilst a gun midfielder makes her return to the side.

Let’s talk about the new inclusions. The first one will be no shock to anyone, because I’ve probably mentioned her name the past few weeks, but for Gold Coast’s Lauren Ahrens, she’s done plenty to secure a defensive rotation on the bench this week. It has been a very tumultuous season for the Suns thus far, but the work of Ahrens, along with Jade Pregelj to hold the fort down as much as humanly possible is a reason why the Suns haven’t lost to opposition by more this week.

We’ve got a new ruck in this week, with Carlton’s Breann Moody taking the mantle as the number one ruck in the game this season. In a year where there hasn’t been a ruck that has genuinely stood out from the rest of the field, Moody’s season is one that I can aptly describe as consistent. Top five in the competition for hitouts, and is also averaging 11 disposals per game, 2.2 tackles, two clearances, two inside 50s and leads all rucks for metres gained, averaging over 209 metres gained per week.

Lastly, I’ve recalled Ebony Marinoff after a string of consistently solid games in the middle for the Crows this season. She posted another 23 disposals and nine tackles in another mammoth performance in Adelaide’s domination against the Saints on the weekend. Currently, she sits fourth in competition for disposals, averaging 23.8 per game, fifth for contested possessions, averaging 11.2 per game and fifth for clearances, averaging 5.2 per game.

Whilst Marinoff has been rewarded for her good form, perhaps one of the unluckiest omissions of the team in Georgia Patrikios. She has had a very fine year so far in what is her second season, but it gets to a certain stage where other players begin to overtake her and the work of Marinoff and Monique Conti (who is again stiff to miss) especially as fellow midfielders has just become to hard to ignore. Patrikios had the 24 touches for the Saints last week, but her form correlates to that of the Saints in general and just starting to decline a fraction.

Moody’s inclusion in the ruck means that Emma King has also dropped out of the side, despite still being placed in the top three rucks in the competition for hitouts. Whilst hitouts are important in any facet of Australian Football, it’s the fact that Moody’s efforts around the ground are just as big as her hitouts are what is standing out right now.

And lastly, Ahrens’ inclusion meant that Rhi Watt has lost her place. Not that she didn’t play a good game on the weekend, in fact, I thought she played well, but it’s a similar case to that of Patrikios, there’s someone in the defensive side that has been continuously churning out strong defensive games and Ahrens has definitely been doing that over the past number of weeks, averaging 15.2 disposals, 8.2 of those being intercepts, as well as just under five marks per game.

So I’ve mentioned Conti already, so lets talk about her a little bit more, because once again she would’ve found herself best on ground on Friday night against Geelong, putting in another 27 disposals for the Tigers on Friday night.

Plenty of midfielders continue to put their hand up, Emma Kearney had 28 disposals for North Melbourne on the weekend against Carlton, but might need another one or two games like that before she gets considered. She’s currently averaging over 20 disposals and four clearances per game.

I’d also like to give Tyla Hanks from Melbourne a mention, because she put in a very strong effort for the Dees in a side that got comprehensively beaten by Collingwood on the weekend. But she’s putting together a very good season. Perhaps much expected given the amount of minutes she’s been given in the midfield.

Alongside Emma King in the ruck department, Lauren Bella remains a big standout from the weekend and continued to press for a claim in the AA side, recording another 20 hitouts, whilst picking up four marks, four tackles and seven touches.

Harriet Cordner put in another strong shift in Richmond’s back line on the weekend and only missed out because it was hard to fault the games of all three of Livingstone, Lutkins and Cuthbertson. Cuthbertson didn’t get her hands on the footy much, but still did a great job in keeping Jesse Wardlaw goalless.

Another small defender that has started to piece together some nice form at the moment is St Kilda’s Tilly Lucas-Rodd, who over the past couple of weeks, recorded disposal totals of 19 and 24 touches. In terms of her season so far, she’s averaging 17 disposals, three rebound 50s, 6.4 intercept possessions, 3.6 tackles and 3.6 marks per game.

As far as forwards go, Aishling Sheridan continues her strong form for the year and continues to mount a case for a spot as the forward rotation, given her consistency in being a scoring threat. Darcy Vescio’s past few weeks has her poking her head through the proverbial door and asking if she’s a small chance. Well, five goals from the past two matches is any indication, she’ll need a few more games like that.

Another quiet week on the disposal front could see Janelle Cuthbertson forced out of the side in favour of Harriet Cordner, who was incredibly unlucky not to get back into the side this week. Cordner’s game against the Cats was very good and played a key part in keeping Geelong to just 13 points on Friday.

Gemma Houghton was in danger last week, and could’ve found herself out of the side this week, failing to hit the scoreboard this week but I thought her efforts in trying to make things work in the Fremantle forward line, in tandem with not many other forwards standing out currently, saves her from being dropped this week. But she’d want a massive game against West Coast this week.

Dakota Davidson had a quiet game herself, being well held by Matilda Sergeant on the weekend, but has got the runs on the board from the past few weeks to retain her spot, plus the fact she laid six tackles, which was a solid defensive effort in a game where it didn’t go her way. So it would have to take another game or two to be held goal less for her spot to be in serious jeopardy.