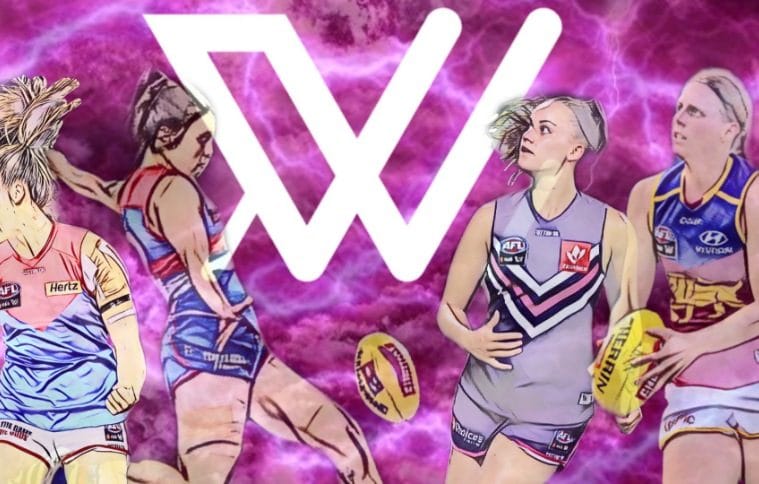 Another big week of AFLW means another week of trying to fit in the best 21 players in the Rolling AFLW All-Australian side. Three weeks in and it just feels like it won’t be getting any easier from here on.

This week I’ve made the five changes to the side after browsing through the games, the replays, the stats, the match reports – anything I could find, I was onto it like Dan Andrews proposing a snap lockdown once we got a handful of Covid cases, but that’s an entirely different kettle of fish, best saved for another time.

So without further ado, here’s who’s made the rolling All-Australian team this week.

Three of the five ins are Brisbane players, so let’s start with them first, shall we? The Lions are playing very good football at present, and it needs to be talked about.

So starting with the backs, I’ve made one change, and I feel it’s warranted, considering how consistently strong she’s been so far to start the year. With Kate Lutkins continuing to churn out very strong defensive performances at Brisbane, it’s become near impossible to leave her out of the team. The Lions so far have been one of the best defensive sides in the league, and Lutkins is a cornerstone piece in this team.

But she’s not the only Lions defender who makes the team this week. After another big game against the Eagles (and a rising star nomination to go with it), Nat Grider finds a place on the bench as a defensive rotation after another standout job across the half-back line for Brisbane on Monday. Grider currently leads the club in both disposals and intercept possessions, averaging 17.6 disposals and 7.3 intercept possessions, as well as averaging two rebound 50s per game.

The third and final Brisbane player in this team made a claim last week when she kicked four goals on the Suns. My co-host on the A3 Footy Podcast, Alex Catalano has also been most vocal about the subject of Dakota Davidson: Where’s Dakota Davidson? When are you going to put Dakota Davidson in? Why haven’t you put Dakota Davidson in? And so on… Yeah I’ve been trying to weave Simpsons and music quotes in a fair bit this year – call it a new year’s resolution of sorts.

But Davidson currently leads the competition in goals kicked, having kicked seven goals thus far and averages 3.3 marks, 7.7 disposals and two tackles per game. Her game against West Coast was evidence that she will be a very dangerous force for the Lions heading into the next month of footy.

The next inclusion has also been quietly working her way up and that’s Melbourne’s Kate Hore. Alongside Greta Bodey (who does keep her spot in this team), these two players lead all mid/small forwards in goals with five each for the year. Hore also averages 10.7 disposals, 3.7 score involvements and five contested possessions per game.

And lastly, a welcome back to North Melbourne’s Emma King, who gets the distinction of being the first re-call in the Rolling AA team this season. The race for the number one ruck spot is still up in the air, but King’s performance gave her another strong claim for the position to be hers, recording 23 hitouts against Lauren Pearce, and also recording two marks and five tackles as well. King does lead all rucks in hitouts and tackles, and is in the top five for marks and top three in score involvements.

A few very stiff to be dropped, but the biggest priority in selecting this team is is about consistency and I’m actively searching for the most consistent players in the competition.

Lutkins’ inclusion meant that I had to drop a key defender. It was tough to choose between both Cuthbertson and Livingstone as to who makes way, but ultimately the chop went to Livingstone. She had just the nine disposals but I didn’t think she looked at her prominent best and the Tigers were definitely working to make her accountable. Cuthbertson was a little quieter in comparison to previous weeks, but maintains her place for this week.

Ebony Marinoff had another strong game for the Crows on the weekend, but the fact I’m looking for a more balanced bench meant someone in the midfield had to make way, and I wasn’t prepared to oust either Georgia Patrikios or Bri Davey. It’s the same reason I haven’t put Maddy Prespakis in this team yet either, for as good as she played, the midfielders currently in this team have started strongly from the start. But mark my words, she’s still pushing to be in this side.

Hore’s inclusion and strong performance meant that Sabreena Duffy is another one unfortunate to be dropped. Duffy’s been in good form, but unfortunately, it’s another one of those ‘someone is better than you’ cases and Hore’s form over the first few weeks has been too good to ignore any longer. Lastly, Ellie Gavalas’ quiet game against the Dees in comparison to the first two weeks has her dropped from the side as well.

Aside from those that were unlucky to be dropped out of the side – Livingstone, Duffy and Marinoff especially – there are a few players that should be on the lookout for this week.

So, we’ve briefly mentioned Prespakis – seriously she was just so close to being into this team. I was covering the Blues game this week and I thought she was going to make the team this week, but unfortunately, the midfielders that are currently in the side, are all going great guns. Even Patrikios, who had a bit more defensive attention on her in Round Three, still picked up the 20 disposals.

Lauren Ahrens played herself a blinder against the Giants in the pouring rain on Saturday and was considered but was overlooked for the hot form of Grider in that defensive spot on the bench. I would love to consider Ali Drennan, given her form this year, but there is going to be many midfielders fighting for the same spot.

Likewise to Melbourne midfield pair Lily Mithen and Tyla Hanks, both of whom I feel are in career-best form for the Dees and without question a couple of the biggest reasons as to why they are where they are on the ladder right now. Bec Beeson from the Giants also put in another strong shift in the midfield and whilst it’ll be hard to get back in, she’ll keep getting the mentions.

Lastly, some forwards to look out for include Melbourne’s Tegan Cunningham, who has started the season very strongly. Her team mate Shelley Scott is just starting to hit her straps as we approach the midway point of the season. Another duo to look out for is Collingwood pair Aishling Sheridan and Chloe Molloy – the latter of that two could easily have been in here if she could kick a little bit straighter.

It’s very tough to say who’s in danger. So far the ruck slot is absolutely up for grabs. Emma King has it this week, but the likes of Metcalfe, Lauren Pearce, Breann Moody and Parris Laurie are all doing solid work this season. As are Rhi Watt and Gab Seymour – just a couple of players to think about heading into this weekend.

The midfield is about as sound as it’s ever been. I’ve never seen Karen Paxman play a bad game, Brittany Bonnici, Ellie Blackburn and Alyce Parker are in the best form of their respective careers and Kiara Bowers continues to truck along just nicely. Same as Jasmine Garner and Erin Phillips, both play exceptionally well as forward/midfielders.

Perhaps the only player I can think of that could face pressure to hold her spot would be Janelle Cuthbertson, who had the 10 disposals and three marks against the Crows and could face pressure from Livingstone if she has another quiet performance and Livingstone plays a blinder next weekend. It would be a disservice to drop Cordner after another strong game against the Pies on the weekend and Lutkins, whilst the stats don’t reflect her impact, has been consistently solid so far.