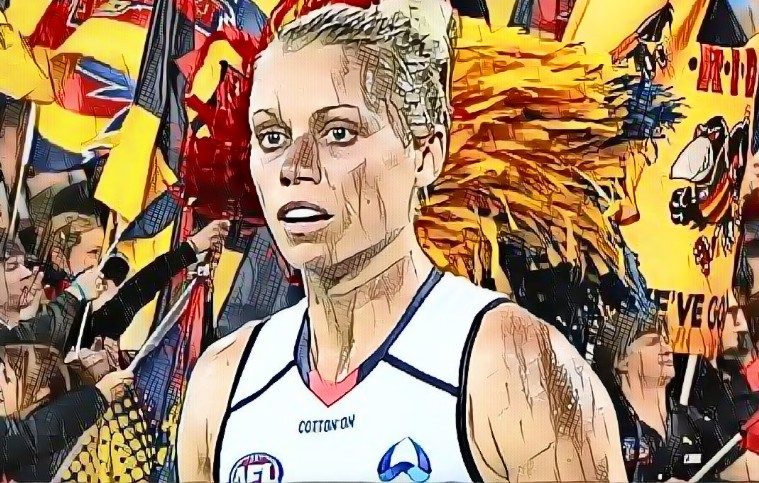 In the midst of the furore surrounding idiotic comments on the internet, pertaining to a spectacular image of Carlton’s Tayla Harris in full flight, we are at risk of losing sight of one of the distinct positives of the AFLW home and away season, which culminated in the best player in the game being recognised as such by the coaches.

Erin Phillips receiving the AFLW Coaches Association Most Valuable Player award has cemented her place as the most important player in the women’s game at a national level.

The daughter of Greg Phillips, red leather runs in her veins, and when watching Erin play, there can be no doubt that she is the player most likely to take the game by the scruff of the neck and shake the life out of it in any game she partakes. In a sport where we have as many athletes as we do true footballers, Erin Phillips is one of the exceptions – she combines both the athleticism of a world class competitor, with the football nous only garnered by playing the game, and loving the game your whole life.

Phillips’ season has been one for the books, literally. Statistically, I am not sure we’ve seen anything like the home and away season she has just produced. Not only did she sit second overall in average disposals, with 21.7 (beaten only by her teammate, Ebony Marinoff), she ranked in the top ten in 11 of the 20 categories listed for AFLW.

For those playing along at home, these numbers are league-wide; not just amongst her team.

What is quite amazing is that even though so many of her disposals came under pressure, she was still able to manufacture enough effective deliveries to her teammates to be ranked as the number one player for efficiency with the footy.

But the statistical brilliance didn’t end with possessions and efficiencies. No, no, no… Phillips sat second in goals kicked for tge season, but first in score assists as well. So when she wasn’t kicking goals, winning clearances and gaining contested touches, she was the one delivering the ball to someone who could. That’d be like Buddy Franklin winning the Coleman, and dishing off as many chances at goal as he kicked. In a nutshell, it’s freakish.

At this point, Phillips is so far above the rest of the competition that her dominance might just work against her in the long run. How so? Well, we’re a strange bunch, us sports fans, and we tend to glorify those who are here right now above those who came before.

In basketball circles, I’ve heard many speak about the greatness of Lebron James, and how his amazing run of consecutive finals appearances (due to end this season) has him on par with Michael Jordan. Personally, I don’t buy it. Nor do I buy that Michael Jordan is the greatest to ever play the game for that matter, though Nike and Gatorade would like you to believe that’s the case.

There were those who came before who deserve just as much recogntion as Jordan and LeBron receive. Kareem Abdul-Jabbar has both more points and more MVP awards than Jordan, yet his name is relegated to the also-rans when the conversation of the GOAT comes up. Wilt Chamberlain did things no one will ever match. He scored 100 points in a single game, completed an entire season averaging over 50 points per game, and had 55 rebounds in a single game (against the man I’ll talk about next) – they are marks that demonstrate just how dominant an athlete he was. And then there was Bill Russell, who led his Boston Celtics to 11 titles. He has more championship rings than fingers… and I don’t know what he does with the spare one!

Yet in our minds, the video packages and advertising surrounding LeBron and MJ lead us all to believe it is a race between the two to sit at the top of the pyramid. The others I mentioned… well, I suppose they were good for their time, right?

And that’s what worries me about the legacy of Erin Phillips. As the game stands right now, she is doing things no one else can do on a regular basis. Second in the league in goals AND first in score assists? That is a forward dominance unseen in a forward at any level of professional Aussie Rules.

But fast forward 30 years (believe me, it goes by so quick at times it feels like it’s fast forwarding). The game of AFLW will have evolved exponentially, and we will have a generation of girls who have grown up with the sport. They will have had their interest and talent nurtured from a young age, all the way through to their professional debuts… and they will be professional – none of this working a day job business. The will do many of the same things Phillips now does, and some may make it look easy. They will be bigger, faster, have more endurance than a 33 year old who finally got her chance to play elite footy at the age of 31.

Will they look back at what Erin Phillips was doing and think she was pretty good… for her time? Will their fans look at the new kids on the AFLW block as though they’re the LeBron James’ of AFLW in 2049, citing Phillips’ accomplishments and downplaying all that she achieved in the infancy of the women’s league as being good for 2019? It’s not too far-fetched when you think about it.

I listen to US sports lover, Bill Simmons talk about how Wilt Chamberlain was only as dominant as he was because the level of competition he faced wasn’t great (yet he lauds the efforts of Bill Russell who played in the same era… crazy, I know), and maybe that’s what the legacy of Phillips will have to endure as time ticks by. Maybe people will have an asterisk next to her name on awards due to the rest of the competition not being up to her level? It’s unfair to Erin, as the peloton is catching her, and they’re pedalling hard.

Make no mistake, Erin Phillips is a champion of the game. While those around her have fumbled and thrown the ball on their boot with, at times, a reckless abandon, she is measured, calculated and poised. There are some players who would excel in any generation of players. She is one of them.

And we should be taking the time right now to appreciate what we’ve got.

Cyril Rioli was retired by 28. John Coleman was finished at 25. Erin Phillips didn’t get to start her professional football career until she was 31, yet she ascended to become the best player in the game rapidly. Imagine if she was able to commence that career ten years earlier? We might be seeing a record to rival, or better that of Gary Ablett Junior in terms of MVP awards.

Speaking of MVPs, Leigh Matthews recently tweeted that the times were changing, with his 13 year old, Canberra-based granddaughter playing footy this year. They’re not changing – they’ve changed, and leading from the front is Erin Phillips. She is the best player in the land in her chosen sport after having that opportunity taken from her at a young age. And she is the best by a fair distance, too,.

However, despite having a fair bit left in the tank, she’s 33, she won’t be around forever.

If you could go back in time and watch Bob Skilton carve up teams for South Melbourne, or Malcolm Blight seamlessly switch from midfield to forward and play both positions brilliantly, you’d jump at the chance. We love watching the greats of the game in full flight. Believe it or not, you have the chance to see a modern great right now.

This weekend, Erin Phillips leads Adelaide out against Geelong in the preliminary final. I expect nothing but a polished, dominant performance from her, and I expect her to lead her Crows into the grand final. This weekend is a father’s chance to take his children to a final and create a memory for them. This is a mother’s chance to share something special with her children. The children will be able to tell their own kids that they saw THE Erin Phillips play. They’ll be able to sit their grandkids on their knees and tell them they were there when Erin Phillips was at her best. Through them, her legacy won’t be as someone who was good “for her time”, but rather, one of the greats.

And that would be fitting.