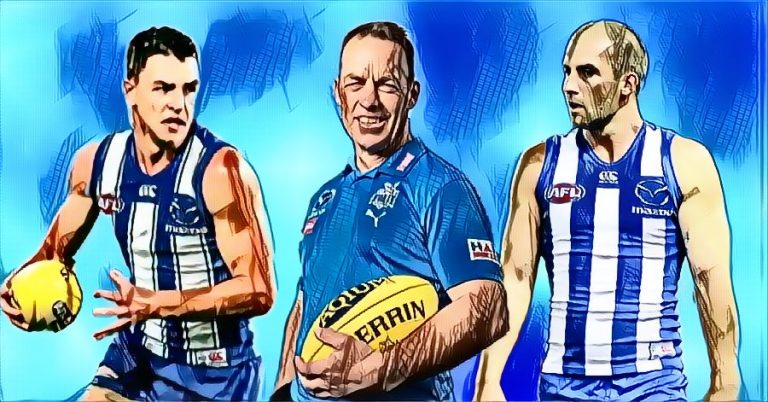 What I Love About My Team In 2023 – North Melbourne

Ah, the preseason. A time when every team is telling supporters that players are in the shape of their lives, veterans are impressed by the draftees, and improvement is practically assured.

Enjoy it while it lasts, because it’s only a short while until the whole preseason doesn’t matter/we looked great in the preseason discussion starts up!

But for the North Melbourne faithful like myself, optimism is definitely in plentiful supply. Two years of, let’s be honest, horrendous football has taken the team to a point where something needed to change, and change they have.

Two spoons in a row. Coaches literally driven out of the club and out of the sport (or worse, having to coach Essendon!). Players recruited and either leaving or failing to deliver (in some cases, both).

And yet… North supporters are looking at 2023 with a sense of hopefulness and expectation of improvement. It does make sense though, considering that it’d be hard to deliver less without actively tanking.

New coaches, new board, new players, new facilities, new medical staff, new sponsors… It’s like North have been sand-bagging the last couple of years so they can hit 2023 with bags of cash and a crop of talent.

Is the optimism a result of delusion? Hypnosis from LDU’s fearsome jawline?  Some version of Stockholm syndrome? It’s certainly possible. And yet, all it will take is a few upset wins and North fans will be gladly signing up for a 2024 membership, especially if one of those is against Port Adelaide and their recently acquired former-number-one pick.

Speaking of number one picks, North made waves when they traded some young lad, plus the number one and ended up with two & three in the 2022 draft. They may have left some money on the table here, but ending up with two of the best mid-sized players in the draft at the cost of missing out on a bloke they weren’t looking to recruit anyway isn’t a bad result.

North have no fewer than twelve players on their list that would not be able to legally order a drink if they went to Vegas for a player’s trip.

And that’s before even getting a look at Josh Goater, who looked good in small bursts, Miller Bergman who was injured just after getting a taste of league footy, and the current third-place owner on most games as a Father-son combination, Cooper Harvey, who will almost certainly get his chance at some stage of the year.

While a lot of these players have big question marks over their ability to translate potential into achievement, it’s still being met with some excitement from supporters to see how they turn out.

Plus, the idea of seeing Zurhaar and Archer pinballing off opponents at both ends of the field is a good day’s fun for anyone wearing blue and white.

Cast your mind back to the early 1970s… OK, well, I wasn’t born then either, but we can all pretend… Housing is as affordable and plentiful as the thick moustaches sported by everyone, the iconic panel van was about to take the nation by storm, and Gough Whitlam was enjoying the early years of what seemed destined to be a long leadership spell, but ended in disappointment, much like North’s history up until that point.

From 1925-1973, North had a total of two finals wins from nine appearances (only marginally better than modern-day Essendon).

Yet in the late 60’s/early 70’s, North put together the pieces for their golden era and maiden premiership. This consisted of former player and part-time dentist Allen Aylett as President, Ron Barassi as coach, and the open chequebook recruitment strategy that netted players like Malcolm Blight, Doug Wade, Barry Cable, and Keith Greig that put North into the premiership race, allowing them to achieve the 75 and 77 flags.

One person sitting in the bleachers at Arden St during this time was a young girl by the name of Sonja Hood. Decades later, she seems to be hoping history will repeat itself.

Under her watch, North has shifted from the commercial focus of then-CEO Ben Amarfio into a more holistic approach at footy that may include trying to win a few games. That’s not a slight on Amarfio—whatever criticism people want to lay at his feet, his job wasn’t in the footy department. He was hired to bring in the dollars and eliminate debt. That he did that during COVID while also saving a future fund is nothing short of amazing, though the need to cut spending in football-related areas likely led to the current situation. Still, not doing so may have led to folding completely, so it’s the lesser of two evils in my book.

Sonja also became the focal point of North’s pursuit of Alastair Clarkson. Some have pointed out that she’s essentially taken a victory lap after he signed on, but if someone lays their reputation on the line from day one, backs themselves and manages to deliver, I think they’re allowed to have a bit of a pat on the back. Some have pointed out that she hasn’t won anything yet, but that’s not her job. She’s there to get the pieces in place, and it’s fair to say she pulled together the best solution available at the time.

While the draft was a decent outcome for North, it’s the off-field acquisitions that really stand out.

Alastair Clarkson is vying with Leigh Matthews as the greatest coach of the AFL era. People will argue various points between them, but most agree that they’re the two front-runners at this point in time (though Cats fans will no doubt add that their man is on his way there too). If Clarkson manages to bring North into finals contention during his tenure, it’ll be one more argument for his status. If he manages to get them to a point where they are vying for the cup… well then I think it’s hard to deny that legacy.

Getting Clarko to the club was the first high-profile piece to be put into place, but it was part of a complete overhaul of the off-field staff. Every department had changes made, from marketing and admin all the way through to the board.

“It’ll be the Clarko show” detractors warned. “He needs someone to pull him up sometimes… like Ratten or Viney did when he was at the Hawks.”

Nek Minnit, both of those blokes are headed to Arden St. Throw in the homecoming of Josh Gibson and suddenly the same detractors are throwing ‘Northorn’ around as if it’s the same as driving the missus’ pastel green Barina. Emulating the success of a team that got a three-peat is a bad thing? Ok then…

The end of excuses

At some stage, North fans have used these or similar variations as excuses for being barely more competitive than a team from St Jude’s u/15 leprosy survivors team would have been.

I don’t think anyone is honestly expecting North to rocket up the ladder in 2023. They’re coming from a point where their team from 2022 would have had issues with some state-league teams. Yet, with the new facilities, staff and players (both the young brigade and established players like Logue and Tucker into the side, North will have some experience to balance out the youth of their squad. Expectations of avoiding the spoon will be number one on the list, followed by winning (or at least being very hungry and competitive) in the marquee Good Friday game, and the battle of the bulls against Port.

But in the end, all anyone can ask of their team is that they have a dip. That they get in there and give every ounce of themselves, and with the 2023 iteration of the Kangas, it seems like that’s going to be the case a lot more often than it has been in the past few years, because anyone under Clarkson who doesn’t will soon find themselves out of the league.