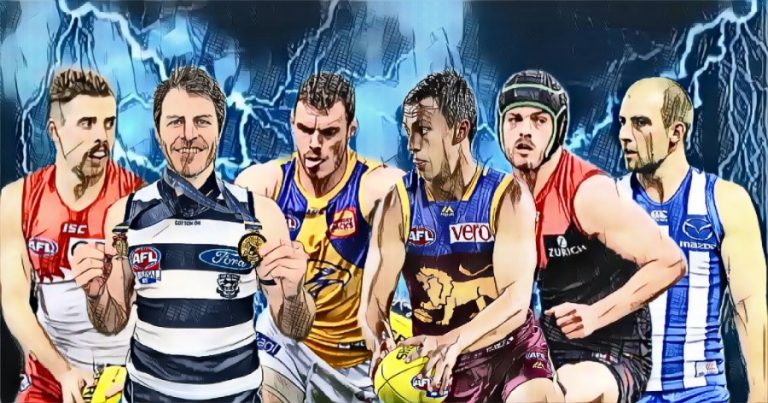 Over the journey, I have had quite a few people remark to me that All-Australian selections should not be used as a way to assess how successful a player is at the highest level. They’re subjective, and at times, provide a warped view of the league given the way the selectors plonk players in positions they don’t play.

It’s something I take on board, but how often do you hear a player have his AA selections thrown in to lend credibility to their opinions?

You get the gist…

But it is only when we look at the calibre of some of the players still in the league that have never been fitted for an All-Australian blazer that we come to understand just why we should be looking at other factors when we start assessing careers and what they’ve meant to both the league and their respective clubs.

Below, I have had a crack at assembling a team comprising of current players never to have made the final team. Some have been featured in the squad – others have never even got that far, but you’d be hard-pressed to argue that these blokes are not fantastic players and would not be out of place in any All-Australian team.

As always, I am.sure I may have left one or two out and you’ll point them out.

NICK VLASTUIN – This bloke is the reason you don’t use AA selections to assess the value of a player. Courageous, unassuming, and all about the team, Vlastuin is the consummate team man and plays the game with nothing but 100% commitment to each and every contest. He is basically Tom Stewart in yellow and black, when fit.

JAMES SICILY – Absolutely railroaded in 2022. Not sure Sic can play at a higher level than he did last season, so I am not sure about his potential to right the wrongs of this past year. Should have been a walk-up start.

JAKE LLOYD – Underrated as… a very underrated thing. Sometimes underrated by even his own supporters! Two Bob Skilton Medals demonstrate just how valued he is to those within the Sydney Footy Club. They don’t just hand out B&F awards.

JEREMY HOWE – One of the more successful transitions from male to fem… err, I mean from attack to defence. Took his high flying show from the Dees to the Pies and just got better. Great intercept mark and though he zones off a little too much at times, has great closing speed. At 32, his AA dreams may be over, though.

JACOB WEITERING – Desperately unlucky not to get the nod in 2021, passed over in favour of Steven May and Aliir Aliir. Won The Mongrel Punt Defensive Player of the Year in 2021 – I reckon he was absolutely robbed of an AA blazer based on one game – Nick Larkey had a career-best day against him.

ROBBIE TARRANT – Was a pillar of strength for North Melbourne for o long before heading over to Punt Rod, where he took his time acclimatising, before finishing the season as the Tigers’ best defender over the last dozen games

HUGH MCCLUGGAGE (WING) – I agonised over this one a bit. Had the runs on the board on the wing, and if they genuinely picked wingmen, he probably would have at least one selection. Has now moved into the guts on a full time basis – more of the footy, but at his best when he gets to the outside and can turn on the jets.

MITCH DUNCAN (WING) – How many times have you heard the word “underrated” applied to Duncan? Perhaps the fact that he has been unable to sway AA selectors to his cause is the reason for that. Always in control, his composure and hard run has been a constant for the Cats.

BEN CUNNINGTON – The warrior. Might have been a gut punch or two away from an AA selection at points in his career. A huge settling influence for the Kangaroos, his reintroduction after a season heavily interrupted by cancer treatment will make the young Roos walk taller.

ADAM TRELOAR – Two seasons of 30+ disposals and two more at over 29 touches per game have not been recognised by selectors. I don’t think you need to be a mind reader to figure out why. Fairy, or unfairly, Treloar’s disposal has been labelled as a weakness in his game.

LUKE SHUEY – I cannot believe that Shuey does not have a blazer. So much so, that I didn’t have him in the team at all and had to be tapped on the shoulder and reminded that he has never received one. Great player, shows up in big moments, but sadly, I think the AA ship has sailed for him.

TOBY NANKERVIS (RUCK) – A bit of conjecture from my fellow Mongrels on this one, with Jarrod Witts thrown int the mix, and even Scott Lycett in the discussion. For me, it was always going to be Nank – plays with his heart on his sleeve and the defensive side of his game is excellent.

BAYLEY FRITSCH – Back-to-back 50-goal seasons from a player who is not a number one forward… that’s impressive. Not impressive enough, it seems?

TIM MEMBREY – I’ve used this analogy before – strikes me as an actor who is just happy to be nominated, but one who will never take home the award. Great hands, that weird, two-legged jump that is both a win and a loss depending on how an opponent plays him, and ducks behind the footy to stabilise the Saints. Opportunity to make good with Max King down for the first half of 2023.

TAYLOR WALKER – Was on track in 2021 after being written off by many following a couple of poor seasons. Backed it up with a strong 2022 but the remainder of his 2021 suspension hindered his chances. Great career renaissance over the last couple of seasons. Have loved watching it.

JORDAN DE GOEY – Might be about time he starts earning that big contract with a consistent season and an AA selection, huh?

INTERCHANGE (I am cheating and having six… medi-subs, or whatever… shut up)

CALLAN WARD – Hard as nails and a leader you cannot help but follow. Walks where angels fear to tread… or so I’ve heard. I know a few devils, but angels seem hard to find.

ISAAC SMITH – Four flags, a Norm Smith, but no AA blazer… something tells me Isaac would be just fine with that. Has played in some pretty spectacular teams, which would see him overlooked when the selectors were focusing on standouts.

STEPHEN CONIGLIO – Had a horror 2020, but has worked back to form. I was under the impression he’d made one at one stage, but… nup. Interesting that we have a couple of players who got big contracts without ever being able to make the AA team, huh?

ANGUS BRAYSHAW – Third in the Brownlow and couldn’t get into the AA team back in 2018. Pretty stiff, huh? Has since moved to the wing and then back to half-back, playing a disciplined brand of footy that is hard to criticise.

ZACH TUOHY – A true everywhere man. Can play wing, half-back, on-ball, run forward and snag goals. One of the best Irish recruits since Jim Stynes… and closing the gap with every game.

JACK CRISP – Has won back-to-back Copeland Trophies, yet has been unable to crack the best team of the year. Painfully unlucky to have no blazer at this stage.

No doubt. you have opinions on this, right? You know where to find me – comments below or on our socials.