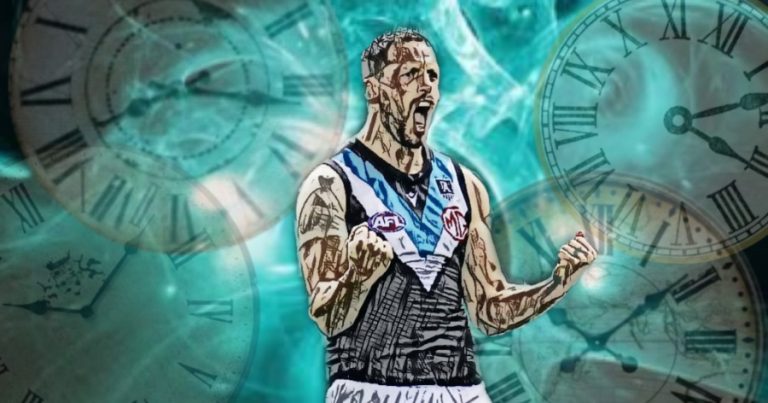 The Hands Of Time And The Power To Slow Them

If there is such a thing as the AFL Fountain of Youth, players would do well to tap Travis Boak on the shoulder and ask about it. He seems to have found it.

You can picture his response, can’t you?

Boak is all-too-aware of the catalyst for his late-career form, and it has nothing to do with fountains. It is all to do with hard work and rededicating himself to the goal of being the best player he can possibly be.

Relegated to a lesser role in the team, he knew he had more to give, and went about applying himself more vigorously than ever before to regain his place in the midfield, and elevate his game to career-best levels.

When I started The Mongrel Punt back in 2018, it appeared as though Travis Boak was in the early stages of decline. Ken Hinkley had his focus firmly on the future and opted to start using Boak in the unfamiliar role of half-forward a little too often, shifting him out of the permanent midfield position around 12 months earlier. Throughout 2017/18, the results were as you’d expect – a sharp decline in disposals and a marginal improvement in scoreboard impact.

Boak knew what was required. All players do, really. Some will do what is expected. Some will do a little extra. Travis Boak was willing to go above and beyond to do the damn work.

His preparation for the 2019 season was something that redefined the art of getting ready for a preseason. Travelling overseas, Boak commenced a regimen of dedicated intense training with the aim of moving back into the guts and not just holding his place, but dominating games. Drills such as holding his breath underwater for extended periods whilst forced to make decisions sharpened his mind as his body (and lung capacity) were pushed to the limits. What emerged from those sessions was a player that was close to unstoppable, averaging over 30 disposals per game for the first time in his career.