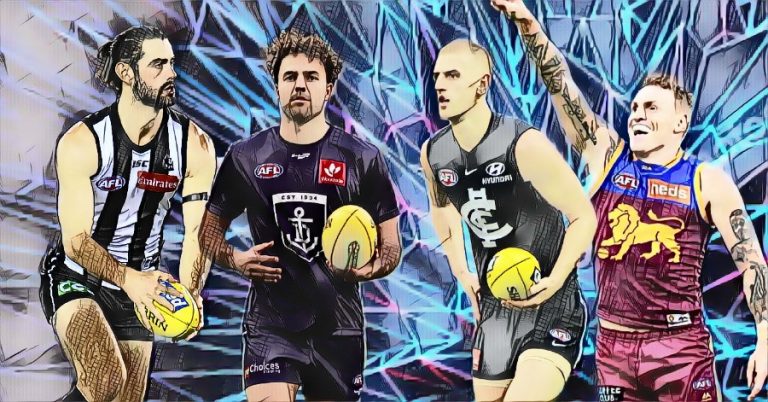 Have you made the error of jumping onto Twitter in the last couple of days?

Or perhaps you’ve been tempted to listen to a bunch of ads with a small dose of Trade Radio mixed in?

If you’re a football supporter at this time of year, there is one thing that stands out above all other news. No, not the fact that a dominant Geelong team was able to cruise to a tenth flag. No, not that Joel Selwood elevated himself into the realm of all-time great captains by adding his first first flag as skipper, or that Patrick Dangerfield was finally able to climb his AFL Everest and get his hands on the premiership cup.

You see, in the current landscape of 48-hour news cycles, the 2022 Grand Final and all associated with are now well and truly in the rear-view mirror. We need to know what’s next. We need to be onto the next big thing, and we need to do it quickly.

And that leads us to… trade period.

It is a time of hope, of possibilities, of… not much happening for 95% of the time and these blokes on the radio making things up to fill time and keep you listening.

We’re just under a week away from the trade period opening up, and already, stories of player movement and the chances of tams improving their lists or draft positions are THE stories.

So, with that, I suppose it is time to look at the likely big moves, and perhaps one or two unlikely ones that should, or could be made.

Welcome to Mongrel Trade. In the first instalment, we cover Griffin Logue, Rory Lobb, Jordan de Goey, Brodie Grundy, Liam Jones, Mitch Robinson, and Jack Bowes. (But HB… some of these aren’t trades… yeah I know. I’m okay with that).

Before I begin this stuff, I just want to add that we’re not factoring in anything to do with the Clarkson allegations or possible fallout, or those alleged of Chris Fagan, for that matter. They can play out in full before they’ll get any column space here. I’ll leave that stuff to the other places.

What does the addition of Griffin Logue mean to the Kangaroos, and what does his loss mean for the Dockers?

Well, assuming the deal goes through without complications, North Melbourne automatically have a big-bodied defender to pair with Ben McKay. To say North struggled against big forwards in 2022 would be an understatement, with Aidan Corr forced to play a couple of levels above his station at points, when McKay was sidelined.

It gives North a solid defensive pairing to combat opposition talls and prevents them from having to send someone like Jack Ziebell inside defensive fifty to add a solid body to the mix.

For the Dockers, this may sound harsh on Logue, but they’re not going to be missing too much.

Logue was the swing-man in their team, which is a polite way of saying he was forced out of the defensive fifty by the likes of Alex Pearce, Luke Ryan, and Brennan Cox. If anything, it costs Freo a bit of versatility and depth, which will only become an issue if the team incurs a rash of injuries at some point in the 2023 season.

So, let’s talk turkey – what is it going to cost?

Logue is a former top-ten pick (number eight overall in 2016) and whilst he has come on over the ast 18 months, he was looking a little like a bust prior to that. With 63 games under his belt, he is likely to start moving into his prime in 2023, so Freo will be pretty eager to be appropriately compensated.

They’ll have to be realistic, however. A second-round pick should be enough to secure the services of Logue and get him to Arden Street, where a juicy five-year deal awaits.

Interesting, Darcy Tucker also nominated North as his preferred destination, but the asking price for him will be modest, considering he was not a best-22 player at Freo. If they package both up, a combination of a second-round pick and a fourth, or a future pick will see North add some grunt, and a bit of depth. Both those attributes are sorely needed at the Kangaroos.

JORDAN DE GOEY IS RIGHT TO HOLD OUT, AND WHAT DO WE MAKE OF THE BRODIE GRUNDY SITUATION?

This is not popular, and I know it. Still, f you don’t say what you genuinely think, what good are you?

So, this bloke was good enough to walk into the Pies’ best team all season, play a couple of ripping games in the finals and now… NOW, his behaviour is a big issue?

Sure, the Pies suspended him from training whilst there was an investigation into his US “incident”, but bugger all came of it. Sure, there was an uproar over his club-approved trip to Bali and a video of de Goey and a “friend” in a club, but her own words ended speculation that he was doing anything untoward.

Sure again, he has a bit of a history that isn’t so great, and he probably cannot blame his dog for all of them, but de Goey is a grown man who is employed to play footy. He is not putting his hand up to be your role model. He is not out there stating that people should follow him and emulate what he is doing – he wants to play footy and is good at it. You can either pay the man to play, or don’t.

Really, it is that simple.

The Pies have attempted to add behavioural clauses into the new deal, but de Goey is having none of it. People are screaming for him to “just sign it” seemingly without the ability to place themselves in his shoes, or understanding what is being demanded of him. How about I get one of you onboard at The Mongrel Punt for 2023? How about I impose conditions on you, because you like a bit of the junk food, that you must not indulge in Maccas?

You’d be pissed off!

Everyone else is allowed to eat it, but not you. Your contract states no Maccas, but I can eat it. Matt Oman can eat it. Jimmy Day can eat it, too.

Either the Pies want this bloke at the club, or they don’t, and if they really don’t, then let him go and explore options properly, and don’t whine with what you get back in exchange. Stop playing stupid games or you’ll end up winning stupid prizes.

Another reason both de Goey and Brodie Grundy would be a little perturbed is the fact that the contracts offered and signed at Collingwood don’t seem to mean much at all.

Adam Treloar found out the hard way. And Grundy is finding out right now. Why would de Goey commit to conditions when the club has a track record of not living up to their end of the bargain, anyway?

Word is that Grundy Is none-too-pleased with the situation, having four years to run on a seven-year deal, yet being shopped around as expendable. As it stands, it appears Melbourne will be the preferred destination for the big man, which seems incredible, as just three years back, Max Gawn and Grundy were the top two-rated rucks in the game.

WHY ARE THE DOGS SO KEEN ON RORY LOBB?

Do they really think that this bloke will be the answer to their woes up forward and as a relief ruckman?

Have they been watching closely?

Lobb is like a house for sale and the owners have whacked a fresh coat of paint on the walls and laid some carpet, hoping you won’t notice that the place… well, it is a bit of a money pit.

Is he going to kick bags of goals?

Nah, not really. He has kicked five goals just once in his career.

Will he take the game over in the ruck?

In the past three seasons, he has had over 20 hit outs once in a game.

So, what is it? The contested marking?

In short, the Dogs are hitching their wagon to a player that could very well see the wheels fall off.

Freo don’t want him to go, apparently. But they will let him go for the right price. Mark my words – they will. And that price will likely be more than Rory Lobb is worth.

Once he gets to the Dogs and settles in, give it one season before you hear something or other he is unhappy with. It’s what he does. Come back to me on it.

Yeah look… I’d like to play, as well. It’s a nice lifestyle, but either Robbo doesn’t watch tape of himself, or he has his eyes three-quarters closed when he does.

He has been a warrior for the Lions, but over the last couple of seasons, he has been reduced to the role of the battering ram and little more. I’m not sure there is a place for him – not just at the Lions, but anywhere.

At 33, and having played 15 games in 2022, Robbo averaged just 0.03 more possessions per game than his rookie season, way back in 2009. Still, he has not read the writing on the wall and wants to go around again.

Not going to happen.

Thanks for the memories, Robbo.

GOLD COAST’S FIRST PICK IS UP FOR GRABS

This seems like it is too good to be true. You can have it, and if you have cap room, all you have to do is take on the back-ended deal of Jack Bowes. He has two years to run, so a rebuilding team with space to absorb the hit will reap some pretty significant rewards.

Something has gone on here, and in the right environment, we could see Bowes excel.

I have always viewed him as a player that could for the Suns what Brandon Starcevich does for the Lions, but it appears as though others disagree.

A team with foresight and intelligent recruiting staff would do well to explore beyond his 2021 output and take a risk on Bowes… not that I believe it is too much of a risk. With pick seven thrown in, this could be the biggest bargain any team will find in this trade period.

And of course, he is rumoured to be heading to Geelong… those glorious, intelligent bastards!

HOW MUCH DOES LIAM JONES HELP THE DOGS?

Over the past two seasons, the highest-rated Bulldog in either category was Ryan Gardner, who was ranked fifth in one-percenters this year. Behind him, Zaine Cordy ranked 16th in 2021.

The Dogs had nobody playing as a genuine interceptor. Having Jones return to the Kennel changes that, and it also gives them a big body that can rash packs and clear the area.

This past season, we saw Alex Keath have the unenviable job of having to play as a lockdown defender – this is not his forte. We saw how capable he was when he was at Adelaide, making Crows fans quickly forget about the departure of Jake Lever, however, at the Dogs, he has been thrust into the key position and has been unable to be as effective. His 8.3 intercepts in 2019 with the Crows remain a clear career-high – with Jones in the team, he could give that a shake again.

Jones joining the Dogs has not been given enough air time, but it is just as much what his presence does for others, as what he will produce, himself.

He could be the recruit of the year.