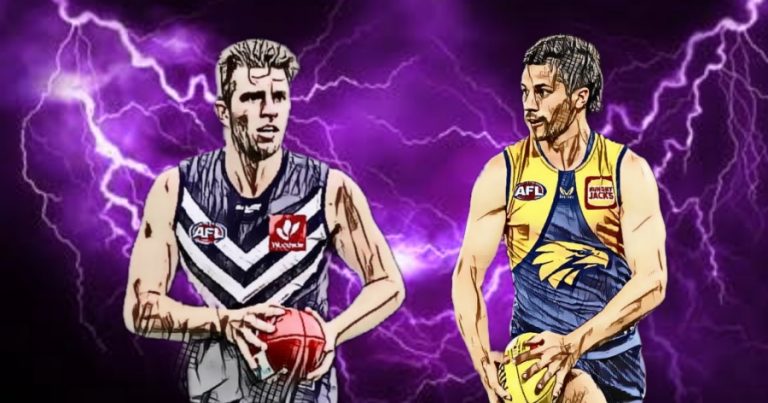 On a wet Saturday night, the Western Derby (sorry, that’s VicBias calling it that) – the Derby between Fremantle and West Coast – took place on a heavy Optus Stadium track. The Dockers needing a win to stay in touch with the top four and the Eagles, well, they’re playing for pride in their last game in their home state for 2022. Can the Dockers go against the grain and win at home? Can the Eagles bring some spice to the local derby? Here are the main headlines!

Even on the Eastern side of this great nation, we are aware of the impact Nic Naitnui has had on the game and the influence he can have on games with his ruck and clearance work. For the general punter, they probably know less about Sean Darcy. Both of these men competed all night and gave opportunities to their teammates. On a wet night, the strength of Darcy won out though.

Nic Nat finished with nine disposals (seven of which were clearances), five inside 50’s, four tackles, and 24 hit outs. While he didn’t impact the scoreboard directly, he brought his teammates into the game. However, he was overshadowed by the hulking figure of Darcy who finished with 16 disposals, six tackles, four clearances, four inside 50’s, and a career-high 57 hit outs; he also added a goal. Now, looking at these numbers, short of the blowout in hit outs, there isn’t too much difference. However, Darcy 8 score involvements to Naitnui’s one – including a great overhead tap, sharked by Blake Acres inside 50, who finished with a great goal.

Both ruckmen played well for their respective teams. However, Darcy’s ability to get the ball around the ground and be involved in scores – not to mention his decisive hit-out numbers give him the win tonight, and a worthy winner of the Glendinning-Allen Medal.

A few months ago HB wrote an article about A Tale of Two Liam’s. He spoke of the emergence of Liam Baker and hoped that the Eagles’ Liam Duggan might do the same. Tonight, the defensive nugget for the Eagles finished with 30 disposals, 7 inside 50’s, 5 tackles, 5 score involvements and a game-high 791 metres gained. Now, I’m not saying that after one game he’s as good a game changer as Baker, but he has been a mainstay in the Eagles lineup and he uses the footy well.

Off the back of performances like this in the derby, Duggan can build into a solid pre-season and then hopefully carry this into 2023. He is tough, he competes, and he usually makes good decisions. I feel like he has more gears he can go up and how he impacts the game can improve, so I look forward to his continued development and evolution as an AFL player.

Speaking on Eagles players, one of the benefits – if you can use that word – of being at the bottom of the ladder is the game exposure you give to young players. And it’s not just one or two games, it’s a good, consistent run in the side. As the year goes on, the likes of Rhett Bazzo, Brady Hough, Luke Foley, Hugh Dixon, and Harry Edwards in particular (forgive me if I’ve missed any others, Eagles fans) have shown great signs for the future. They may have inconsistencies and make mistakes, but you can forgive them if they continue to compete – which these young blokes do week in, week out.

I’ve spoken of Hough a few times this season when reviewing Eagles games, but I really like the way he goes about it. As he gets more confident in his own ability, and in his body, I expect we’ll see more midfield minutes and his disposal numbers will increase. He already has hardness – which can be hard to teach with young blokes.

It took about 10 minutes into Derby 55 before emotions boiled over and didn’t the fans love it? There was an off-the-ball incident resulting in a Hugh Dixon goal which then boiled over into a number of spot fires. Andy Brayshaw was involved, Jackson Nelson got involved, and soon every player on the ground was in a scrap and both teams got a starting position warning.

Later in the quarter, Caleb Serong, looking like Tarzan with how his jumper was torn gave away a 150-metre penalty. Soon after, Jack Redden and Brayshaw tangled again at the centre bounce, this with the free kick going the Dockers’ way.

As a neutral fan – and I don’t condone violence – a little spice in the game is always good. It shows passion, pride for the jumper and provides a spectacle for the fans. While it might been a Bali version of what you’d see in a WWE ring, it was good to see that there is still some pride in the jumper, especially in the Eagles case, when the team is sitting in the lower reaches of the ladder.

Recruit of the Year

There’s been many a discussion on social media and from the so-called footy experts on TV, and the guys here at the Mongrel Punt have been crunching the numbers as well, to determine the Recruit of the Year. Earlier on Saturday, Tyson Stengle lit up Metricon Stadium. As the rain poured in Perth, you could hear on the wind Will Brodie saying “hold my beer!”

The former Sun has produced an outstanding season. He has balanced his inside and outside work, and complements the likes of Brayshaw and Serong extremely well. In the wet, his bigger body is perfect for the conditions. He finished with 28 disposals, 15 contested, 5 tackles, 7 clearances (3 from centre bounces), and 6 inside 50’s. He was brutal around stoppages and brought his teammates into the game all night.

Brodie again showed why he is in the conversation, if not the main man, when it comes to recruit of the year. He has added an extra dimension to the Dockers’ midfield and has been a valuable part of what the Purple Haze is building in 2022 and beyond. Will he finish as the recruit of the year? It’ll be tight between him and Stengle. If Brodie wins it though, there should be no argument about it. He would be a very worthy winner for what he has done this year, for one of the standout teams in 2022.

Give Him His Blazer!

Death, taxes, and defenders missing out on their due respect. Hopefully, that doesn’t befall Tom Barrass in 2022. Yes, I know, players in the bottom sides rarely even make the All-Australian squad, let alone the team itself, but find me a defender more worthy of a blazer this year than Tom Barrass.

Steven May, Jacob Weitering, Sam Taylor, heck, even Sam de Koning have had great seasons. For most of them, they are in top sides, with great defenders and team structure supporting them. Barrass has been a lone hand for much of 2022, as Jeremy McGovern has been repeatedly sidelined. Barrass has marshalled the troops, played on the biggest and best key forwards, and rarely lowered his colours.

His 14 intercepts tonight add to his 2022 total of 146, where he averages the sixth most this year with 8.11. It’s not just the intercepts though, he uses the ball well, brings it to ground, and provides the Eagles with a steadying presence in the back half. I hope his season is rewarded with an All-Australian blazer. We shouldn’t just look to the top sides when there are standouts in the lower reaches of the ladder. Here’s to hearing “Full/Centre Half Back – Tom Barrass” when the team is announced.

One of the fringe Eagles, Xavier O’Neill, has had some good moments this year. He had one in the first quarter tonight when Nathan O’Driscoll received the ball deep in his defensive 50 in space. He hesitated, and O’Neill ran him down, winning the free kick. That sort of pressure and ruthlessness was shown by all the Eagles for much of the game.

In a farewell of sorts for David Mundy, he showed that age is just a number as he had a match-high eight clearances, to go with his 25 disposals (12 contested). He was involved in everything for the Dockers, and was duly celebrated as he left the ground with this perhaps his final home game in Perth (pending the Dockers ladder position come finals).

Bad kicking is bad football. It’s a statement we hear a lot in footy circles. The Dockers threatened to be on the end of one of the upsets of the season early as their kicking in front of goal let them down. Finishing with 9.17, they were able to rally late and secure the 4 points, not before an almighty scare from the Eagles.

Michael Walters has built into his year really well. Where once he was the main source of goals and a spark for the Dockers, others have helped to share the load this year, allowing Walters to become more of a role player. He finished with 19 disposals and 2 goals tonight, a solid contributor, without the pressure to be dominant.

I’m loving what Michael Frederick is doing this year. From his ridiculous goal in round one (in my mind, still the goal of the year) to his ongoing contribution, he has recognised his leg speed as a weapon and uses it effectively. He finished with 2.2 from 10 disposals to again show he is more than just a speedster, but that he regularly impacts the scoreboard.

Shannon Hurn is still ever reliable for the Eagles. Finishing with 28 disposals at 79% efficiency in the wet, he used his tracer bullet right boot well. He had 8 intercepts, 4 inside 50’s, and second most metres gained with 661. Unfortunately, he didn’t feature in any scoring chains, however with his kicking penetration, he was able to clear the area and take some pressure off his defenders.

That’s all from Perth as the Dockers survived a scare from their cross-town rivals to win by an even four goals. They won in the wet and at home – two things they have struggled to do thus far this year. They need to rectify their struggles in the wet and in front of goal to go deep in September. The Eagles were brave, they were fierce, and while they fell short, this was a much better spectacle than some others we’ve seen from them – even if Freo’s wayward kicking flattered them. Freo travel to the nation’s capital next Saturday to round out their home and away season against the Giants, while the Eagles face ladder leaders in Geelong in the Saturday Twilight fixture and will hope to finish their season with another positive effort.