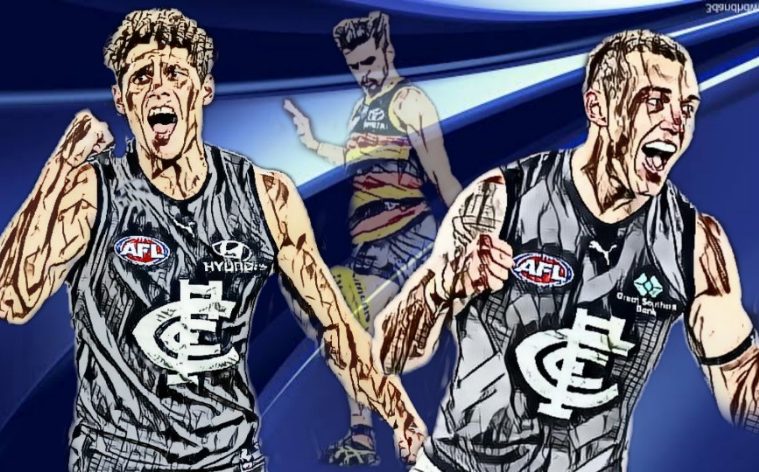 These teams came into this game on different paths. Carlton was looking to sure up a top-four spot on the ladder, with both the Saint sand Swans faltering and leaving a gap for the Blues to punch through.

The Crows were smarting after being bludgeoned by the GWS Giants in the first half of last week’s match before eking out a respectable second half, but the match was long over before the resistance showed up. The Crows did swing a slight selection axe with the omission of experienced campaigner Matt Crouch.

Interesting note that Crows stand-in coach Scott Burns said that the key indicator for the club to know if they were going to be in-form and competitive in this match, would be the first 15 minutes of the game. Well, they kicked two early goals and looked lively through the middle in the early part of this game. Then Carlton clicked into gear and started to grind them down.

After those first two goals, Carlton proceeded to kick 15 of the next 18 goals. They absolutely demolished the Crows through the middle of the ground. The top disposal winners in that area reads like a procession for the Blues. They had huge advantages in clearances and contested possessions, which is now a clear indicator for this Carlton team. They are a clearance team that score more from chains of possession than direct from turnover. If you let them get the ball on their terms, they’re going to hurt you, and that is exactly what they did to the Crows in this game.

Well, no point dillydallying on a Monday morning, let’s get into the stuff that mattered.

It seems like Patrick Cripps features at the top of this section as often as Dominic Toretto says Family in the Fast & Furious franchise. Seriously, what more can be said by a lowly pundit about Cripps anymore, that hasn’t been exclaimed ad nauseum by a dozen others.

Comparisons to all manner of fictional characters and beasts simply pale in comparison to the real thing. I could liken his walk out onto the ground, to Voss doing his best Liam Neeson impression and going “Release the Kraken” and simply unleashing Cripps on whatever poor opposition stood in his way.

The guy is midfielder built like a key forward, who rucks occasionally and runs like he owes someone money. Oh, and he can kick set shot bombs from outside 50. I could take you through some key moments for Cripps, but all you really need is his stat line. Unlike others, Cripps stats definitely do not lie, this season.

35 disposals (albeit 26 handballs, the only slight knock on his game today), 19 contested possessions, two goals, two goal assists, 12 score involvements, 10 clearances, seven tackles (three of them inside forward 50) and six inside 50’s.

I relegated Charlie Curnow to second fiddle last week as he and Harry McKay did as they pleased against North Melbourne. Curnow must’ve sensed that he was becoming the Sam Winchester to Harry’s Dean, and he was just not having any of that!

With McKay being somewhat held, Curnow turned it on for the Blues to stamp the duo as the equal of the much-vaunted pair down the highway at the Cattery (Sick of the comparisons to the big Cats Blues fans? Too bad, they’re going to keep happening all season as these sets of key forwards go back and forth on the Coleman leader board).

I know I said Cripps’ numbers speak for themselves, but Curnow’s numbers are arguably better.

Just simply stuffing the stat sheet in this one, Charlie. I will say that the 21 disposals are bigger than it even looks, as it wasn’t like Curnow was searching for the footy across halfback, more than 50% of those disposals came inside forward 50. I suppose when your team has 74 inside 50s you’re likely to have a couple come your way, but he still had to get it done and he delivered in a big way in this game.

The other uber consistent performer in this Carlton side. Docherty’s praises were sung heavily last week and he delivered a similar performance in this game. Docherty is just an experienced veteran at this point. He knows where the footy is going and reads the play and knows exactly where he wants to be and where he wants to go.

Docherty collected a game-high 11 intercepts, with his 30 disposals, 10 marks and nine score involvements (not a bad ratio for a running defender).

This is in here, if not just for the story. Talk about rags to riches. Keays captained his first game of AFL footy for the Crows and has elevated his game to an elite level. Those of us paying attention saw the signs during last year, but now he is getting the recognition in the AFL media.

Keays battled manfully in the centre, but I felt like he wasn’t getting a lot of support, outside of Rory Laird and Sam Berry. So many times, you would find Keays extracting the footy whilst being grappled by multiple Carlton players and still finding a way to slam it on his boot and clear the area.

However, there is only so much one man can do and Keays was no match for the onslaught that was the elite Carlton midfield that simply out-muscled and out-classed the Crows in every way. The frustration did bubble over for Keays as he did get pinged for arguing with an umpire at one stage.

Still, captaining your club is a feat that not many achieve and is something that Keays will always be able to remember.

May not have had stellar numbers in this match, but I thought his effort and toughness around the footy was first class. Probably the only other crows mid I thought that had a red hot crack, even when the Blues were rolling.

Berry has that level of aggression you enjoy seeing, that hunt for both the ball and the opponent. A sense of desperation emanates from his effort that I just couldn’t help but respect.

The Other Blues Midfielders

This is my second blues game in two weeks and players like Walsh, Kennedy and Cerra have barely rated a mention. It is difficult to fit everyone in these reviews, and with the Blues best playing so well, they are incredibly difficult to ignore. But a lot of credit has to go to the supporting cast that has elevated this team from mediocre and inconsistent, to a legitimate finals contender. There is no hiding from it now, Blues fans.

Whether it’s Walsh’s run or hands in close, Kennedy’s bullocking work, or Cerra’s releasing run and delivery, all the Carlton mids are simply gelling incredibly well. It is a beautiful thing to watch, and the proof is in how they have not really missed a step without a dominant ruckman.

Now, I think it’s pretty obvious that a guy writing for this site likes a bit of mongrel in footy. However, the Crows just went a little over that line between mongrel and ill-discipline and ended up costing themselves with poor free kicks that gave Carlton field position and momentum. This was typified by Shane McAdam who may come under scrutiny from the Match Review Officer for his somewhat late hit on the Carlton defender (Boyd) dropping back in the hole.

I thought it was a respectable hit out from De Koning. He got beat in the hit-outs but effectively drew even with O’Brien around the ground and ensured that O’Brien also didn’t have the hit-outs all his own way, allowing the Blues to take control in the midfield. I’m sure Blues fans will be hoping for repeats of that effort until Marc Pittonet can make his return.

Very good outing from Dawson in this match. One of many Crows defenders who had to stand up under an avalanche of pressure from the Blues’ midfield and forwards.

Yes, Curnow ran riot, but I actually thought McKay was quite well held, and not just the times when the umpire paid the free kicks for it. Credit has to go to the likes of Butts, Brown and Jones for their efforts to not let this match blow out any further than it did.

The Blues have found a very solid footing for their campaign. Sitting 6-2 and outright 4th after eight rounds. Very nice. I’m sure every Carlton fan would’ve taken that in a heartbeat at the start of the year. Three games before the bye, and looking at the fixture, it is deceptive in this Mongrels view. Sure, the Blues should account for the Giants, but it is in Western Sydney and they will be out with a point to prove after getting humbled by the Cats. Then it’s a five-day break to play the Swans on Friday night at Marvel. That’s a genuine 50/50 game. Then they finish with Collingwood at the MCG on a Sunday afternoon. They should account for them, but that rivalry is marrow-deep, and is definitely not beyond an upset.

I suppose my point is, that I only see them potentially losing one of those matches, but I wouldn’t be disheartened if I was a Carlton fan and they dropped one more. Worse things have happened.

For Adelaide, their next three are what arguably could constitute a nightmare. Hosting the Brisbane Lions and St. Kilda in consecutive weeks before a trip down to Geelong. There is possible relief after that with a home game against the hapless Eagles, but a lot can change in a month of footy.