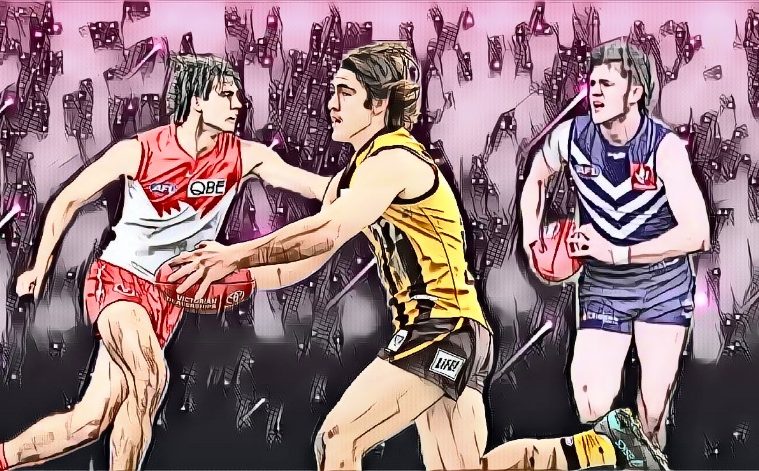 So here at The Mongrel, we’ve taken it upon ourselves to rectify another good AFL idea not quite reaching its potential, this time the Ron Evans Medal for the rising star. Last year we decided to rename it the creative ‘Mongrel Rising Star’ and anointed the Giants Tom Green our inaugural winner, we keep the same eligibility criteria as the official award, players cannot have played more than 10 senior matches or turned 21 before the start of the 2021 season. As always there are a myriad of fine contenders for this award from the highly-rated Jason Horne-Francis, Nick Daicos, Finn Callaghan, Josh’s Rachele, Sinn & Ward, and Tiger Gibcus, along with impressive Bomber Ben Hobbs. These talented kids from the Class of ’21 will have to contend with those still eligible who got a taste last year amongst them Oli Henry, Swans duo Logan McDonald and Braeden Campbell, Hawk bull Jai Newcombe and Demon premiership player Jake Bowey.

As per last year, we are adding our very unique magic mongrel secret herbs and spices formula is to the voting system, which presently involves seven assorted media dinosaurs desperately trying to remember the name of the top five most popular kids that Sportsbet have installed as favourite. Our system will see a 5,4,3,2,1 vote system applied each round and cumulative scoring with the winner crowned by finishing with the most points.

Of course, this doesn’t ensure our methodology is foolproof, but without being arrogant, we think we can do it a little better than the AFL. So, without further adieu (we’re also cultured speaking French, Gil would love that), here is the next instalment of vote-getters in the remarkably catchily named ‘Mongrel Rising Star’ award for 2022:

There has been some separation at the top of the leader board after five completed rounds, with the ultra-consistent ball winner, Josh Daicos polling four times, dynamic Crow forward Josh Rachele three times, and mid-season surprise packet, Jai Newcombe also three times. Rounding out the top five are a pair of Dockers, Chapman & O’Driscoll who have both been key players in Fremantle’s rise up the ladder thus far in 2022. Overall, 15 players have earned votes, with the rebuilding Hawks having three players on the list, while Freo, Collingwood and the Tigers have two players at this embryonic stage of the year.

This actual round brought about some outstanding performances with the Crows and Hawks the biggest winners and duly recognised amongst the eight mentioned players below.

We’ve covered off Jai’s amazing rise from the relative obscurity in a small Gippsland town via Box Hill to his incredible SCG debut, what is perhaps even more amazing is his ceiling after an Easter Monday special where he stood toe-to-toe with the likes of Selwood, Dangerfield, Duncan and Guthrie. He not only stared them down but bulldozed them, side-stepped them, blind turned around them and fended them off to the tune of a best afield display in front of an enraptured crowd. 31 disposals in a four-quarter effort, gaining 653m with seven marks and six intercepts.

The only minor letdown was turnovers by foot, he kicks very well off both feet but appears to try to kick it too hard at times and can spray the ball away from his target. A rising star nominee in just his 11th game, the Hawk moves into the top three of the coveted Mongrel award.

Taking the mantle as THE key forward in Franklin’s absence, McDonald returned home to Western Australia and dominated from the opening bounce. Moving with confidence that is hard to generate standing alongside the 1,000-goal man, he was unbeatable in the air pulling down eight marks, on his way to scoring two goals, one superbly finished on the run from outside the arc.

His work ethic is the other attribute that really showed out in the Good Friday clash, three tackles inside forward 50, and four one-percenters would’ve had the Swannies fans as pumped as the goals. McDonald also led all players on the ground with three direct goal assists showing great creativity and an ability to share the ball to achieve the best outcome for his side.

The Freo speedster goes from strength to strength in his wing role complementing a dominant on-ball brigade. What impresses most is O’Driscoll’s ability to collect the ball at pace and break the lines then deliver well to his forwards. This was on show time and again at Marvel as Freo wore down the Bombers after half-time, going on a withering run of ten unanswered goals.

The young Docker finished with 22 touches, gaining 480m and taking three bounces along the way, he also contributed offensively driving the ball inside F50 on six occasions leading to two direct goal assists.

All last year we kept hearing and reading updates about the younger brother of Josh Daicos tearing the NAB League up with 35+ touches each game, well it appears those reports were accurate as Nick has taken to the AFL like a stick of butter to a frying pan, lots of sizzle and delicious outcomes – perhaps I should’ve just stuck to ‘duck to water’? Averaging 27 disposals in the step up to the big league, this is the total he returned against the Lions, and was only marked down in a minor way due to the high zone employed by Brisbane that gave him less time and room to display his creativity.

Three intercepts and four score involvements were a bit down, and it was the first time he’d had more handballs than kicks, the mark of a good player however is to keep finding a way, and he acquitted himself well under fierce pressure.

The 2019 rookie selection hasn’t had any continuity to his AFL career to date, only playing his 5th game overall on the weekend. He is steadily improving though and followed up his 3-goal effort against the Blues with a game where he achieved career-highs in all statistical categories apart from the scoreboard.

A small pressure forward gaining 60% of his disposals in contested situations and delivering an above elite six tackles within the F50 is exactly what a coach wants to maximise scoring opportunities. Three clearances from limited stoppages was also encouraging and Rosas can fill a gap in the Suns lineup as they endeavour to finally climb the ladder in 2022.

Josh Rachele, has the innate ability to impose himself on a game in the balance like the very best players in the league. Here he was again bobbing up with two goals and an assist in a stunning upset of the Tigers.

Josh Ward, still gaining his sea AFL legs as far as pace and time are concerned but repeatedly finds himself in the right position as his 18 touches attest, also collected a game-high five clearances against the hardened Cats in yet another promising display.

Brayden Cook, the tall Crow mid/utility delivered his most influential game in his fledgling career capturing seventeen touches at 88% and progressing the ball 375m from six intercepts to be a key contributor in his teams big win.