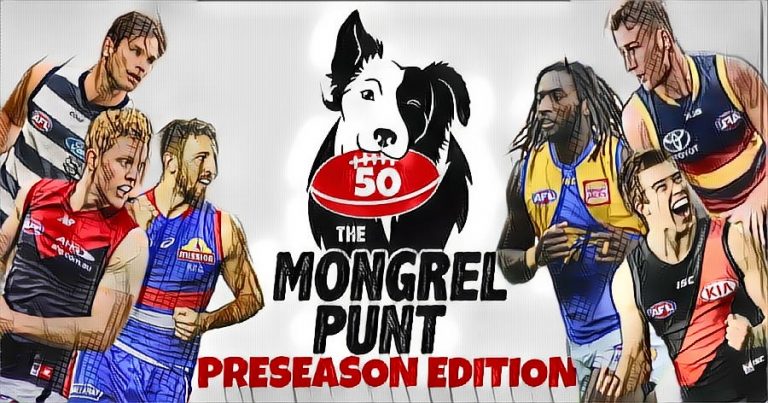 Well, it’s that time of year again. Our previews for each team are complete and we’re now on the road to the AAMI Preseason Series. Following that, the 2022 AFL Season will be upon us.

Kind of sneaks up on ya, doesn’t it?

Not fast enough, at times.

During the season, we rate every player in the league in statistical categories relevant to their positions. Defenders have stat-triggers in key areas for their roles, like one-percenters, intercepts, and rebound fifties. Forwards for tackles inside 50, score involvements, and marks inside 50. You get the picture, right? It’s no use compiling one big score including areas that are not pertinent to the role of the players – that makes no sense.

We then combine those numbers with coaches votes, and our own Mongrel votes each week to have an overall score for each player in each round.

From there, every two weeks following Round Four, the Mongrel 50 is released, culminating in one winner at the end. As it stands, the winners’ list looks as follows.

As we get set to enter the 2022 season, I have compiled our preseason version of the Mongrel 50. It’s a little different, inasmuch as it combined the scores for the last two years, so you’d expect the last two winners to rate pretty highly, as long as they’ve had a decent year in the season they didn’t win.

So, who have been the best players in the home and away seasons for the past two seasons? And please note, I stated it is for the HOME AND AWAY season. Let’s find out.

Clayton Oliver jumps 26 places to capture the number one ranking, but Zach Merrett’s 32-place leap is also impressive. Both Rory Laird and Daniel Rich, coming off a pair of stellar years, make the leap into the overall top ten from being ranked 50+ just 12 months ago.

Look no further than Patrick Cripps and Nat Fyfe in this category. Both ranked top ten before the start of their 2021 campaigns, and both cruising on the back of excellent 2019 carryover scores, these blokes plummeted out of the 50 based on poor 2021 returns. Combine that with their 2019 scores now being removed, and it was not a great year for either of them.

WAS IT TOO MIDFIELD HEAVY?

Yeah, probably. 23 of the 50 are mids, with seven of the top ten a little too midfield-oriented for my liking.

Defenders made up 18 of the positions, forwards had only five, and rucks made up six.

So, should I be a little more lenient to the forwards in 2022? Mmmmaybe, but when they do have big games, they seem to be pretty bloody big. If they play consistent footy, they’ll be right up the top. Hawkins was very close to being number one in 2020.

Todd Goldstein was next in line, followed by Tim Kelly, Sam Docherty (big 2020) and Taylor Adams.

Andrew Brayshaw is increasing momentum, and Tex Walker had about 80% of his points come from his 2021 efforts.

I suppose having Danger and Dusty in the 40s is a surprise, particularly when their names would be right at the top of the list of most peoples’ lists of the best players in the league. Their time out with injury in 2021 cost them a lot of places.

Been meaning to do this for a while. Now seems like the right time.

Sam Docherty – great start to the year then fell away.

Taylor Walker – incredible start to the season. Easily led the pack through the first four weeks of the season.

NUMBER OF PLAYERS INCLUDED PER TEAM

As always, if you have questions, arguments, or criticisms… which seem to be the main type of feedback to lists like this, then by all means get me on our socials or in the comments.

First Mongrel 50 for the 2022 season drops after Round Four. Inner Circle Members will get weekly updates throughout the season.