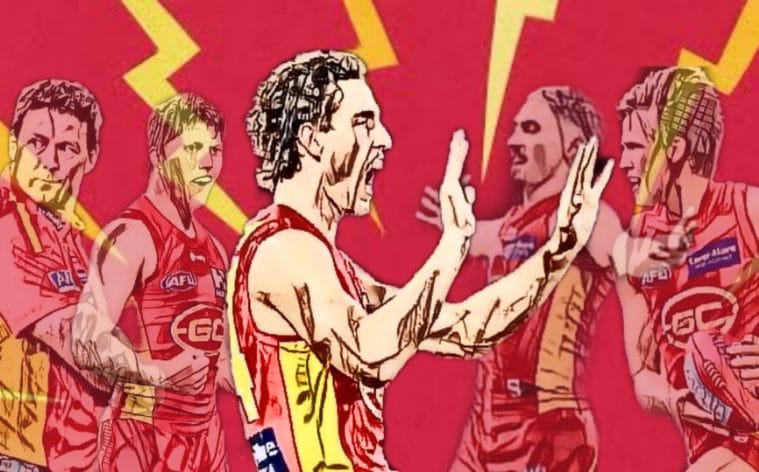 Just as things seemed to be looking up on the Gold Coast, the second-worst news possible crashed down upon them like a wave.

The club, and its fans, would have been buoyed by the imminent re-signing of Ben King, reportedly on a two-year deal, however, things went incredibly sour. Late this week, King went down in a marking contest, damaging his right knee. After being sent for scans, the Suns’ second-worst fears were confirmed – King was done for the season, rupturing his anterior cruciate ligament.

After enduring so much pain over the last few years, the club went from celebrating an apparent deal with the young star. If he were looking to depart, that would have been the worst news. This comes a close second. It has left the Suns pondering how they structure a forward line without him for the 2022 season.

And the options don’t look outstanding.

Earlier this preseason, I wrote of how King’s signature may be the biggest in the history of the struggling AFL club – not just in terms of securing his services, but in terms of what it means to those around him at the club. If the big fella was willing to sign, perhaps others shared his vision for the club? Perhaps they too, would be willing to be part of the group that leads Gold Coast to their first-ever finals appearance?

King was part of the big three from the 2018 AFL Draft for the Suns. It was King, Jack Lukosius, and Izak Rankine – the pillars of the new Gold Coast era.

The pillars could be about to crumble.

My understanding is that the future of Jack Lukosius at the club was largely dependent on what the Suns were able to produce this season. A South Australian boy, there is no question that both the Crows and Power would be very willing to make a move for Lukosius after the 2022 season. Lukosius is out of contract and wants to play in a successful team. Losing King for the year not only steps on the toes of the Suns being that team, but it also tramples all over them and leaves them crushed and broken.

Lukosius was rumoured to be making a move into the forward line this season – a role he was tried in when he first arrived at Gold Coast. Playing alongside King inside 50 would have given him plenty of room to operate after being shuffled between the wing and half-back the previous two years. However, playing alongside Levi Casboult, or Josh Corbett… it doesn’t have quite the same allure, does it?

Another out of contract following this season is Izak Rankine, and whilst there has been plenty of sizzle about his game, Suns fans were waiting for a little more steak to appear on his plate. His best is wonderful, but it is seen all too seldom. Another SA product, the lure of family may be enough to draw him back to Adelaide, and again, either of the two SA teams would be salivating over his availability.

And then there is Stuart Dew.

Entering his fifth season as coach of the Suns, his charges have finished 17th, 18th, 14th, and 16th. This had to be the season his team started making noise. Losing Ben King is the equivalent of starting the season with his hands tied behind his back and a sock stuffed in his mouth. Yeah, I’d feel like stamping my feet if I were him, as well.

Gold Coast is consistently bashed by AFL fans, It’s become somewhat of a hobby for some, but you cannot help but feel for the club as their brightest star fell from the sky. I fully expect King to follow through with his new deal with the Suns, but what transpires with others over the next nine or so months will largely dictate the future of this club.

Gold Coast would be very hopeful that players in their second and third seasons make huge leaps – Matt Rowell needs a good run at the season and is still well-positioned to become one of the better young midfielders in the game despite injury sidelining him in each of the last two seasons. This year is about staying healthy and staying on the park for him.

The Suns have a plethora of other players in this age bracket, as well- Noah Anderson, Connor Budarick, Elijah Hollands, Jeremy Sharp, Sam Flanders, Charlie Ballard, Wil Powell, even Ben Ainsworth and Jack Bowes are only 24 – they are all capable of so much. However, as has been the case thus far in the life of the Suns, so much has been promised and so little delivered.

2022 was already a make-or-break season for Gold Coast before the injury to Ben King, but the current situation leaves them looking like a severely weakened offensive threat. When you have the newly-acquired duo of Levi Casboult and Mabior Chol as arguably the two best options up forward, you know you’re in a bit of strife. They played almost the whole 2021 season without a genuine ruckman and now look to be in a similar situation with their forwards.

And the fallout of that forward line not functioning could be catastrophic to the club.

So, we’ve heard the worst – what is the best-case scenario from here?

What if Lukosius finds his niche inside 50? What if Levi Casboult plays like a man whose AFL career depends on playing well? What if Mabior Chol flourishes in a new environment? Or what if Sam Day, Josh Corbett, or Chris Burgess find a way to have a bigger impact?

Look, they’re not out of the question, but they are seemingly all long shots, particularly when you consider that King slotted 47 goals in 2021 and the next best Sun was Corbett with just 23.

It is going to take something pretty special for the Suns to succeed in 2022. They start the year with games against the Eagles, Dees, Giants, and Blues. Would they fancy themselves in two of those games? One, maybe?

How this team sits after four rounds will be very interesting. I’ll be watching closely to see not only the results and what players are doing, but also the body language, and what players are not doing. Is Lukosius playing out time? Does he look frustrated? Is Rankine looking for something special and not doing the fundamentals?

Losing Ben King is a horrible blow for this club, but the fallout could be even worse. If the Suns are sitting in the bottom three halfway through the season, it won’t be long until people call for the axe for Stuart Dew. This is a contract season for him, and I have to say, I don’t like his chances of getting another one with another bottom four finish staring his team in the face.