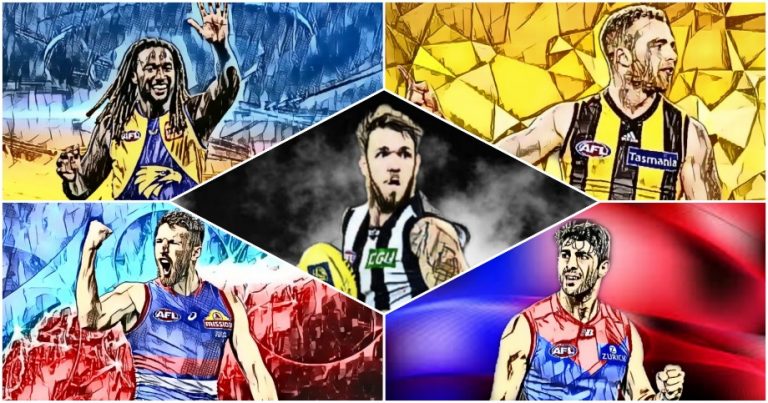 Here at The Mongrel we love to do things a little differently. Two seasons ago, we introduced the first of our annual specialised awards – The Pluggies, for the best offensive efforts of the season, but far from being entirely swayed by those who kick bags of goals, we were looking to be an equal-opportunity award giver.

We then went on to award The Doullies for the most outstanding defensive efforts of the season. Both of these awards had their second incarnations over the last couple of weeks.

And so, we’re now looking at the mids. With these blokes, we’ll include the rucks as well.

But wait, isn’t the Brownlow the midfielders’ award anyway? Well, yes it is – nice pick-up; I can see I’m dealing with some smart cookies, here. We’re more about drilling down into the nitty-gritty of the midfield. Who was best at getting their hands on it first? Who created the most damage going forward? Who did the best tagging job of the season? And who is the man who… ummm, did other stuff that I haven’t yet finalised… better than everyone else?

Initially, I wanted to call this award “The Juddies”. I thought it had a bit of a ring to it, but the more I thought about it, I came to the conclusion that I didn’t want an award named after Judd. I thought it might start taking itself too seriously. I needed an award named after someone that doesn’t think too highly of himself… or at least doesn’t mind taking the piss out of himself. Someone like… Dane Swan?

And just like that, the award for mids from the site not taking itself too seriously was born. In honour of the former Collingwood champ who seems to give less than half a toss about the people who have a crack at him, we have our third annual Swannies. It’s not the Oscars, it’s more prestigious than the Logies, less prestigious than the Montgomery Burns award for the Outstanding Achievement in the Field of Excellence, and it certainly fits right in with the Pluggies and Doullies.

Ladies and Gentlemen, I give you, the 2021 Swannies. Let’s kick it off.

AND THE WINNER IS… MARCUS BONTEMPELLI

Darcy Parish is very stiff, here, but given Bont’s efforts helped propel his team to a win, I have opted to go for the Dogs captain for the best individual midfield performance for the year.

Bont had several games that could have been considered, ut this was his best.

Double figures across the board in the big stats – clearances, inside 50s, score involvements – combined with 19 contested touches and eight tackles, there was nothing that Bont did not do to get his team over the line against the Blues.

THE RON JEREMY “Hey, that’s some mighty effective tackle you have there” AWARD for the best tackler in the game

AND THE WINNER IS… JACK STEELE

There are a few players in the league that, when on, can do a bit of everything to get their team over the line. Elliot Yeo is one who does it. When fit, Josh Dunkley is another. As is Touk Miller. And then there is Jack Steele.

Not only winning a ton of the footy, Steele’s tackling was a standout for the Saints, and exactly the type of effort you need from a club captain. The way Steele goes about his footy just seems to scream “follow me”.

If only the Saints had a few more that actually followed that example, huh?

Many made a big deal of Steele’s late season run in terms of what he did with the footy, but it is the defensive aspect of his game that is being rewarded here. With tackles in double figures seven times during the season, he is a deserving winner of this award.

One last note – Hugh Greenwood was well and truly on track to repeat as the winner of this award. In 17 games, he notched double figure tackles in eight of them and was on track to break the all-time single season tackle record before getting injured. Heal up, Hugh.

AND THE WINNER IS… CLAYTON OLIVER

Am I robbing Tom Liberatore, here?

Some would say yes, but given I am doing it… I’m saying no. Makes sense, right?

Libba had an incredible start to the season, and was looking as though a record number of clearances may have been on the cards, but he levelled out as the season progressed.

Oliver just kept getting better and added not only this award to his trophy case (this one would be at the front, right?) but also broke the record for contested disposals in the season. Not patting myself on the back here, but… called it!!!

Oliver’s hands are some of the best in the business. Wet ball or dry, it does not matter to him. My dearly departed father would have called him a footballer’s footballer. That’s about as high praise as I can give. What a year for Oliver!

The master and the apprentice?

Nah, I think Lachie Ash has a much brighter future ahead of him than as a tagger, but in order to lean the game, sometimes you have to run with the best, and Lachie Ash did just that in Round 19, when he slammed the brakes on the rampant Darcy Parish.

Parish had been tearing it up, but with Ash sticking to his task, he was limited to just 15 touches. For context, Parish had 34 disposal games on either side of this lockdown effort from Ash.

Matt de Boer’s efforts against Sam Walsh were just as impressive. The league’s best-known tagger squeezed the life out of Sam Walsh, restricting him to just 20 touches.

That may not sound like a huge effort, but eight of those disposals came in the last quarter when de Boer released the tag.

Again, for contest – this was Walsh’s lowest disposal count of the season, and was bookended by games of 30+ disposals. When given a job to do, there are none better than Matt de Boer. And one more thing – what makes this effort truly spectacular is that de Boer didn’t even start on Walsh at centre bounces. Instead, he came running in off half forward to commence the tag, allowing Walsh free rein in the middle. .

THE SAMWISE GAMGEE “Get on my back and I’ll carry you the rest of the way” award for carrying your team to a win.

AND THE WINNER IS… TOM MITCHELL – ROUND ONE

First game of the season. Bombers up by 40+ points… the Hawks were looking down the barrel of what would be a disastrous start to the year.

And then Tom Mitchell said “enough”.

With an incredible 17 touches in the third quarter, and nine more in the last, the 2018 Brownlow Medallist put the Hawks on his back and carried them to one of the best comeback wins in the club’s history.

Mitchell was everywhere, setting up teammates with pinpoint release handballs to ignite the running game of the Hawks.

The result, a one-point win to his team.

It’s safe to say that without Tom Mitchell in this Hawthorn team, the Bombers win this one quite comfortably.

AND THE WINNER IS – JARRYD LYONS

So, I guess if you miss this award, it kind of adds to just how underrated you are, right?

I couldn’t go past Lyons for this award. When Lachie Neale went down injured, it was Lyons, with his two-way game, that gave them the stability in the middle. The Lions midfield somewhat reminds me of Hawthorn in 2019 when Tom Mitchell went down. The Hawks needed Jaeger O’Meara to step into the number one spot – he couldn’t.

The Lions needed Jarryd Lyons to do the same… and he was more than up for the challenge.

He is a ferocious tackler and wins plenty of the hard footy. Had Ben Cunnington played a few more games, he may have snuck into collect his second award, but this year is belongs to Lyons – he has been an incredible signing for this club.

AND THE WINNER IS… NIC NAITANUI (ROUND 23)

With the Eagles looking pretty ordinary this season, it was their big man that knuckled down in the final game of the season to demonstrate what a player who actually gives a shit should look like.

Matched up against Oscar McInerney, Nic Nat was far and away the best Eagle on the ground, compiling a stunning return of 24 touches, with 22 contested possessions amongst them, 53 hit outs, and 11 clearances.

He did everything he could to elevate his team, but against a Brisbane team hell-bent on a top four spot, it just wasn’t enough. Still, this is a fitting reward for the dominance of Naitanui at ruck contests for the entire year. What is amazing, is that he is doing this stuff without cracking close to 80% game time. Incredible effort.

AND THE WINNER IS… CHRISTIAN PETRACCA

This was a race in two, really. Trac and Bont were the two players thrust into the middle of the ground to win clearances and bully the footy forward quickly.

Bont, with his loping run and long kicking, and Petracca with his bullocking, power game to find space where there seemingly was none.

In the end, we went with the man who did it more often, and did it better when it counted most. When Petracca had the footy, the forwards immediately knew to get on the move. It was coming in long, hard and fast… sounds like a fun time, yet for the defenders, it was a nightmare.

AND THE WINNER IS – CHRISTIAN PETRACCA

On the biggest stage of them all, it was Christian Petracca that ensured he would not be remembered as a good home and way player.

Petracca played in three finals in 2022, registering the type of numbers that any player in the history of the game would be proud of.

30 touches and two goals in week one.

32 touches and eight clearances in the Prelim.

And 39 touches, two goals and a Norm Smith Medal to round out one of the more brilliant finals series from any player in the history of the game.

He was everywhere, doing everything, and he was the undoubted player of the finals.

And there we go; the third annual edition of ‘The Swannies.

Hopefully it is taken in the tone it is intended, but you just can never tell with some people… they get so fired up over something so small…much like many of Joe Ganino’s romantic partners.

Thanks to everyone who has jumped on as a member and decided to support us. Your help enables us to produce better content and more of it. 2022 will be a big year for The Mongrel, and we hope to give you more than your money’s worth as members. Hit the link below if you’d like to join.