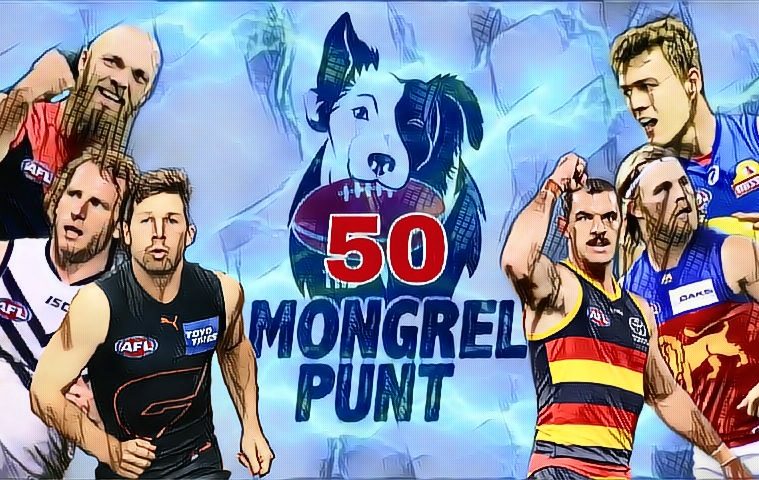 What makes The Mongrel 50 different from every other set of player ratings is that it is fluent in nature, placing a strong emphasis on the last four weeks of footy to capture those currently in the best form.

How does it work?

Glad I asked – it gives 100% weighting to any points scored over the last four weeks and anything before that gets hit with a 50% reduction. It greatly benefits the present without completely disregarding the past.

So, how does that look in practice? Here’s an example.

Dustin Martin scored heavily in the first two weeks. Since then, however, he has scored in just one game. With the 50% reduction in his points from the first two rounds, Dusty has plummeted in these rankings. This is what it is designed to do – capture the players who are surging and reward those with a continued presence at the top of the league.

So, all you’ve got to do is perform well to begin with and continually top up your score every couple of weeks. Do that, and you’ll be up toward the top of the rankings.

My aim for this rankings is to have a great mix of players from all roles – not just another system designed to reward midfielders who rack them up (and a big hello to Brad Crouch…). As such, players are only assessed on things pertinent to their roles – it’s no use scoring a back pocket rebounder on his tackles inside 50, is it? I’m sure you get the gist of it.

Round Four ranks in bold

Drastic fall from Tom Mitchell, whose best footy was played in the Round One comeback against the Bombers. Since then, he has compiled plenty of touches, but failed to hit stat triggers in multiple categories, so has fallen way back to 53rd.

Shannon Hurn falls out due to injury, which is a damn shame, because his kicking was amazing before his calf injury.

Dusty, I covered in the intro.

Jack Steele… interesting one. St Kilda’s best player, but has not his the highest of highs this season. Like Tom Mitchell, picking up plenty of the footy but not having that standout, dominant game.

Jack Bowes was big through the first four weeks – has returned donuts in this system for the past two weeks, and that is enough to see him tumble out.

Tim Membrey… someone would be having a teary, somewhere, about that.

And Darcy Moore’s shift to attack has been a big loss in terms of his impact in these rankings. Being assessed as a forward… he makes a great defender.

THE NEW NUMBER ONE

Let me hit you with this right off the bat.

In the last four weeks, Big Max has averaged 23.75 disposals, 4.25 contested marks and a goal per game. Not bad for a fella who has started to defer to Luke Jackson here and there in the ruck. It’s a big statement, but Max may have just had his best month of football to date, and the number one ranking is reflective of that.

Perhaps, but I think given his consistency, we’ll see him leapfrog those whose scores are currently being propped up by one or two big weeks. He has a few makes at Melbourne stealing a bit of his thunder at the moment, as well.

AND BONT TOO LOW?

Definitely, but he is in the same boat as Trac, having other blokes doing great things in a team that is winning often. Look, I would have him way above Josh Bruce if we were to be picking our personal teams, but has Bont been better than Macrae? Better than Petracca? Better than Wines?

These are the questions that need to be answered over the next couple of weeks.

IF YOU HAVE ZIEBELL THAT HIGH, YOU CANNOT BE TAKEN SERIOUSLY

Oh, seriously… which crap footy journo did you copy your opinion from?

I watched Jack Ziebell stand under long inside 50 kicks from the Dockers last weekend and get cleaned up. No sooking, no crying… just got back to his feet and went back to work.

Many point to the amount of kick ins he takes, but those same people don’t bat an eyelid when Luke Ryan, Sam Docherty, or Jordan Ridley do the same. It wouldn’t surprise me if they were the same people gushing over how good Ridley had been before suffering a concussion. Without Ziebell, North would be in a much worse position than they are, and that’s saying something. He is holding together a backline missing Robbie Tarrant, reigning best and fairest, Luke McDonald, and recruit Aiden Corr. Once he gets some help, we’ll probably hear all about how his output has declined.

BUT, JOSH BRUCE HAS HAD ONE GOOD GAME…

But what a game, right?

Get the picture? He sits third in the Coleman race and averages 1.8 contested grabs per game. This fortnight still has his massive 10-goal game weighted at 100%. Next fortnight will not, so he’ll need another big outing to retain his place.

WHERE HAVE ALL THE SWANS GONE?

I’m sure the supporters would like to know, as well.

Last fortnight, we had a massive eight Sydney players in the mix, reflecting their early-season form. Much like their team, those players have fallen off the pace a bit.

Tom Hickey survives despite injury, and Jake Lloyd makes lists like this for fun – he is so damn consistent. But the others…  Parker just missed, Dawson out, Wicks out, Heeney out, Mills out, Reid out.

In fairness, quite a few of them were in the tenuous spot of being in the 40-50 range, but it has been a bit of a dramatic fall. They have the resurgent Cats this week – the kids and the veterans need to make a stand or the early season work will be for naught.

Lachie Neale – It’s been revealed in the last 24 hours that the reigning Mongrel 50 Champion is going to miss the next couple of months. That all but guarantees we’re going to have our third individual winner in the last three seasons. Grundy in 2019, Neale in 2020 and ??? in 2021.

Patrick Dangerfield – this is the season that his All-Australian run ends. Too much time on the pine, with more to come.

Aliir Aliir – this is a statistically-based system, with points also added for coaches votes and Mongrel votes. Aliir’s impact on a good team has been great, but the efforts of Weitering, Liam Jones, and Jordan Ridley outweigh his work. Of course, the eye test says that Aliir has been massive. 70th place

Patrick Cripps – not himself this season… or last season, which is a bit of a worry. Scored well in Round Three. Has barely troubled the scorers in the three others. 100th place

Tim Kelly has fallen to 164

And Andrew Gaff is down at 84.

Anyone else you want to know, give me a yell and I’ll let you know.

And now, for our Inner Circle Members, I’m jumping to the weekly rankings.