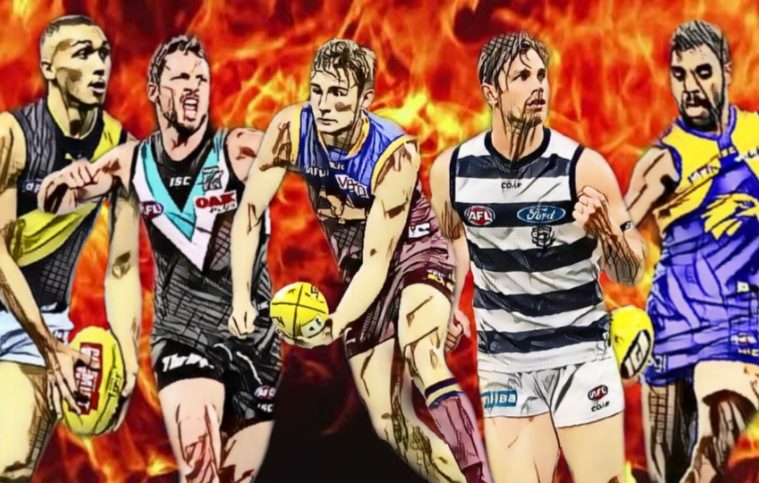 Well here I am, thinking about the next round on a Tuesday. I haven’t even had time to recover from last round. There’s too much footy happening and we’re about to truly enter the time of torn hamstrings.

Yup. You, me and the average punter might love three rounds compressed into two weeks but it’s going to be hell on the players. Five-day breaks are a new thing, and there’s some pretty tired blokes out there.

We’re almost halfway through the season and I still have absolutely no idea about half the teams. Usually by round eight, I’ve got pretty much all of them sussed out. But there’s a number this year that have me perplexed and the only good thing about being perplexed is that I get to use the word perplexed.

So, let’s see who I can give the kiss of death to this week.

Someone was very quick to remind me today that Richmond shouldn’t win this game because they haven’t beaten anyone decent. It’s a fair and valid concern about last year’s premiers. The Dogs have looked particularly good this year, and they seem to have a spring in their step, but I can’t be sold on them.

But I like the Dogs. And I like that Richmond are back in their traditional home of ninth spot on the ladder. I’m sure a loss here will help them stay there.

Ok, so what happened to the hub thing. Port were in Adelaide now get to go back to Brisbane? I must have missed something here. To be honest for Port, that’s not a bad thing because in Brisbane they beat everyone who isn’t Brisbane and in Adelaide they lost to St Kilda. So perhaps they like it over there.

Melbourne had their best chance of beating Brisbane last week, by proxy of the statistical anomaly that the second top side hadn’t won a game all year. Well done, Melbourne you ruined everything. Can’t even win these important games that keep useless stats running and give us writers (or ramblers, in this case) something to write about. Thanks.

I have liked Melbourne recently. They’ve been very Un-Melbourne-like, which is to say they’ve looked like an AFL side. It’s unexpected but just I was getting used to it, I fear they’re on a bit of a precipice. They were good against Brisbane, very unlucky not to win. A win against Port and who knows where they’ll end up. They might even become a good AFL side. But a loss, and a bad loss, to Port could have the reverse effect and send them spiralling.

Port need a win. They were embarrassed at home and want their top spot to be taken seriously. Fortunately for them, Melbourne aren’t yet a top eight side, so they are in the portion of the ladder that Port can beat.

And they will. I’m still not sold on Melbourne. Even if they do sometimes play OK.

What I am looking forward to most this game is finding out what dumb thing Clarkson can say in the post-match conference. I’ve enjoyed his ramblings and ravings this year, most of which haven’t had much accuracy behind them. It’s good to see him hot under the collar after way too many years on top.

I’m a little worried about Carlton. They seem to be shooting up the ladder and I’m not sure if any of them have much experience with heights. It doesn’t look right having Carlton anywhere near the top 8 and a win here could see them in it! Does that mean we can go to their 2008 slogan “They know we’re coming” and finally say they’ve arrived? It’s about time. I’d ask if they had the courtesy to at least bring coffee with them, but it’s probably cold by now.

Anyway, back to the footy.

I reckon Carlton will win this. Hawthorn have not convinced me at all this year. Another loss means another interesting press conference, and we all could do with a laugh.

Oh, Essendon. I almost ruined you. You keep telling me not to tip you, but hey! You won!  I mean it was a lot closer than you’d have wanted, but don’t complain to me. I just wanted to give Adelaide a chance.

And Brisbane. How dare you win last week. See above for incoherent ramblings about arbitrary stats that suggest you shouldn’t have.

Let’s focus on this week. Brisbane are taken pretty seriously, but they need to beat and really control sides like Essendon if they want to keep sending the message that they are contenders. Because Essendon are a pretty good side and they are capable of beating anyone on their day, as long as I apparently don’t talk them up too much.

A win here for the Dons can see them in the top four, assuming some lucky results go their way. It’s a bit early to be talking top four and whatnot, but it’s always a good feeling to be there halfway through the season. Just ask Brisbane, they’d know.

I can’t go past Brisbane here, though. I think match up to match up, the Lions just have better quality around the ground.

Welcome to the who cares cup. Actually, I kinda care. When there’s two terrible sides playing together you sometimes get a really good game of footy as neither side is good enough to put enough pressure on the other to lower the skill levels.

Of course, neither of these sides need a lot of pressure to do that. They can do it all by themselves. Although there was a lot of improvement in Adelaide last week, and they have been building a little bit, so a win is just around the corner. I can sense it. North, I don’t know. The Roos have been going backwards at such a rate I’m concerned they’re stuck in reverse, though they have their fair share of injuries so they can at least place some misfortune in that. I’m calling it now, whoever loses this game will win the wooden spoon.

And I think North will lose this match. Adelaide are due a win. I think they’re close.

Well, didn’t St Kilda look great last week. Haven’t Sydney looked woeful this year. I enjoy reading various pages All-Australians and teams of the week etc, and I noticed in one that St. Kilda has about 9 players featured, so they must be doing something right in someone’s eyes. And to be fair, they’re doing quite a bit right in most people eyes, but then there are games like this. This is the exact type of game St. Kilda should be winning, so it’s the best chance to tip against them for a smoky. Because St. Kilda are just one of those sides. Win the games they should lose and lose the games they should win.

However, Sydney are very good at losing recently, though their win last week against Hawthorn may have inspired them back into a little bit of form. I keep being told there’s plenty of talent in this Sydney side and I keep not really seeing it. I’m sure it exists, and they did show some glimpses last week. But I think the Sainters will get the job done here.

Sorry Cats fans, but this will be a thrashing for the Eagles. A combination of the weakened midfield and the fact only 5 days earlier you had to play a tough game in cold and wet conditions leaves me with little confidence you’ll have the energy in your legs to get up over the Eagles, who have managed just a couple of light training drills against witches hats in the last fortnight.

It’s not that I think the gap between these two sides is that big. The Eagles must be premiership favourites by now, and Geelong are a very good side. But they’re going to be a very tired side. The only thing that might be able to save them is another good dousing of rain, because the Eagles are bloody dreadful in the wet. But unless the Vics have brought the weather with them (which wouldn’t bloody surprise me) I think it’ll be a good night for footy and a better night for the Eagles.

Especially if there’s no Hawkins, though he should play. Wasn’t quite as ridiculous a suspension as Yeo’s but wasn’t that far off.

I no longer know where I stand with the Gold Coast. I knew they’d fade at some stage and I knew they were never going to be an absolute top side, but I can’t decide whether they’ve faded now or not. They are starting to look a lot more vulnerable then they did early on though.

GWS have started to lift in form a little bit, but not in any real convincing way. They’ve talent to burn but there’s always questions over their consistency.

I have to back GWS here. As much as I would love the Gold Coast to win, that’ll mean hearing a lot more about Rankine and while he’s having a great first season, let’s not pretend they’re about to hand him every medal under the sun.

Well, last week Fremantle managed to score more injuries than goals, in what I suspect is a first in AFL history. Standard to their luck, this game just coincides with a determined Collingwood who were humiliated by the Eagles last week but will be strengthened by the return of Sidebottom. Can you just rest him or something, Eddie?

Collingwood will throw last week’s performance out with the bathwater. Those games happen. The key for them winning is keeping sides below 40 points, which they’ve done on most occasions this year and have established themselves as the best defensive side.

It’s a good thing for them that they’re playing a side who apparently can’t kick 20.

What will be interesting though is Justin Longmuir gets to coach against his former mentor in Buckley. But I think to find anything there would be to create drama that doesn’t exist, and I won’t be accused of acting like a TV broadcast commentator. I suspect that might annoy you, wouldn’t it?

Pies will return to form and win by 27.