The Good, Bad and Ugly of Gillon McLachlan

Gillon McLachlan’s reign as AFL CEO is nearing the end, with the chief’s contract expiring at the end of next season. McLachlan has previously stated that he wants a less high-profile and scrutinised job by the time his children reach high school, meaning next year is set to be his final year in the hot seat of one of the most high-profile and scrutinised jobs in the land.

So, as the curtain prepares to close on his reign over the AFL, we review how he has fared thus far – the only way The Mongrel Punt knows how. This is the good, bad and the ugly of Gillon McLachlan’s legacy.

This inspired captain’s call will be the skipper’s most enduring and legacy-defining act. A national women’s competition was originally scheduled to commence in 2020. However, McLachlan, in the face of several doubters both inside and outside AFL House, decided to fast track this process which resulted in the AFLW beginning in 2017 – in a blaze of glory. Women’s participation in Australian Football has exploded since then, entirely on the back of the AFLW ‘movement’. It was a massive statement and demonstration of leadership from McLachlan, and meant a generation of female footballers finally had their dream realised.

In a game increasingly driven by the bottom line, McLachlan’s administration was able to deliver a record-breaking broadcast deal that cements the AFL’s place as the most powerful – and secure – code in the country. The $2.508 billion six-year broadcast rights deal with Seven, Telstra and Rupert Murdoch’s News Corp signed in 2015 looks even more impressive now due to the industry wide concern over negotiations for the next broadcast rights deal. Financially, McLachlan will leave the AFL in its strongest ever position.

After years of softening up the game’s traditionalists, the AFL, under Gil’s watch, finally bit the bullet and introduced for the first time, Good Friday football. The AFL is yet to settle on an annual match-up with pioneers North Melbourne having hosted the Bulldogs, St Kilda and Essendon over its three-year run. West Coast and Port Adelaide also received a piece of the action with this year’s double-headed fixture. The league will eventually find the right mix, but most importantly, the game raises significant funds for the Good Friday Appeal and has been a largely welcomed edition to the football calendar.

The annual Good Friday style cycle is nearing its completion in regards to a twilight Grand Final. ‘Inevitable’ was the word used by McLachlan’s to describe the incoming twilight Grand Final, with AFL Chairman Richard Goyder going public in his support for the concept earlier this year. ‘Inevitable’ is a long timeframe but with McLachlan set to depart the league at the end of next season, pencil in a twilight GF for 2020. The time change is expected to deliver 800,000 more viewers from the less football-infatuated states of New South Wales and Queensland. But how will the football obsessed in Victoria, SA and WA handle the change to their well-planned Grand Final day celebrations?

A mid-season trade period is set to take place in a competition wide bye next season in order to further feed the ever-hungry trade news beast. This year’s mid-season draft delivered little yet has been significantly detrimental to the game’s second-tier competition, especially the SANFL and WAFL who remain independent of the AFL’s control. The idea of mid-season trade period is even worse and will be a debacle for contracts and provide unneeded pressure on AFL players to uproot their lives to play and live halfway across the country in the space of a week.

Every time Lachie Whitfield has the footy in a GWS jumper – which is quite often! – my mind immediately jumps to his ill-fated attempt to avoid drug testers and how on earth he is allowed to be still playing? McLachlan’s AFL’s pathetic eight-week suspension in 2015 should have been four years if the rules had anything to do with it. And if ASADA did not pick and choose when its strikes and when it cowers. Too often in McLachlan’s reign were penalties based on convenience and ‘optics’, instead of rules and fairness. Put an asterisk next to Lachie Whitfield – and hence, GWS – until next season.

When the Swans embarrassed the AFL by pulling the tablecloth out on their plans to sign Lance Franklin as the face of their newest baby, the Giants – the AFL proceeded to further embarrass themselves. The AFL severely penalised Sydney with a two-year trading ban for following the rules that they designed. Former AFL Chairman Mike Fitzpatrick has his fingerprints all over the farcical ban but McLachlan’s title means he too must yield some responsibility. The ban has certainly been at the forefront of the incredibly strained relationship between the league and its most critical club.

The beginning of McLachlan’s reign was dominated by the dark clouds of a drugs debacle that crushed the game for years. As deputy leader, McLachlan shouldered much of the responsibility for the league’s handling of the crisis even before sitting in the main chair. However, his primary failing is not having implemented significant change in stopping such a debacle from ever happening again. The first step would be ditching the WADA code which is completely incompatible with AFL football. Specifically, the WADA code’s assumption that athletes are responsible for actions of their coaches and support staff is a ridiculous notion in a competition where footballers have no say where they are drafted. An ill-fitting drug code doomed thirty-four footballers; this risk remains over all others because McLachlan has not addressed the issue that defined his tenure in charge. 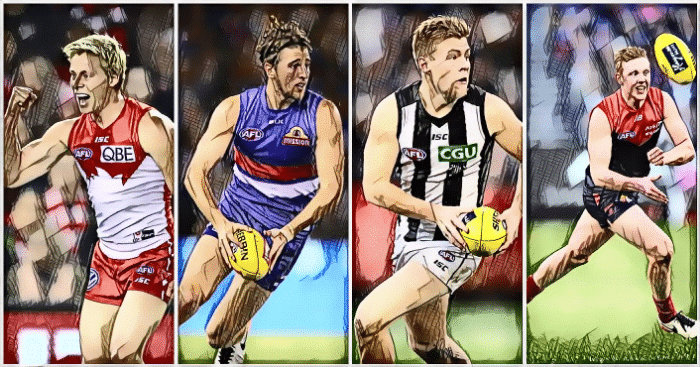 Who are the best players aged 23 or under? Check out The Mongrel’s Patron article with the All 23 & Under team