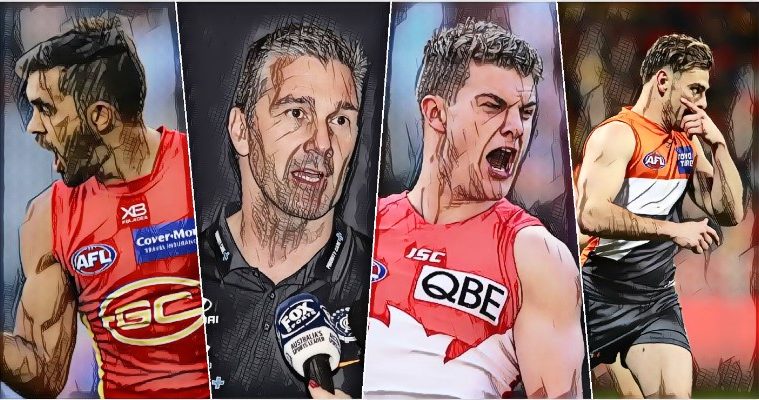 The Trade Period – A Carlton Perspective

I’d like to cast your minds back to the 10th of October 2007. The football world and the Carlton Football Club were abuzz with the news that, arguably, the best player in the AFL at that time had formally announced he would be joining the Blues.

For Carlton fans, it was the signing that would signify the end of the club’s darkest ever period in its history after finishing last in 2002, 2005 and 2006. And, for me on a personal level, I became a father pretty much exactly nine months to the day after the Judd signing. For any of you who doubt me, I can produce a birth certificate verifying the birth of my daughter which fell on July 9, 2008.

Needless to say, the Judd news certainly inspired me… but I digress.

Unfortunately, there were still many dark times ahead. Chris Judd certainly improved the club’s fortunes with some finals appearances and a Brownlow Medal. However, by the time the great man played his last game in 2015, it would become clear that there were still rough times ahead and that perhaps the West Coast Eagles via Josh Kennedy may have fared better in that trade. The other thing that seems to be a constant source of ire for the modern Blues fans is the fact that Juddy is the last “big fish” the club has been able to secure during trade period.

Carlton supporters are divided over the current course of actions by the club in an attempt to restore us to the glory days of the previous century. The Malthouse appointment certainly backfired, and many list decisions during his tenure were puzzling to say the least. The Bolton period spoke of green shoots that never bloomed. The natives, growing ever restless, needed some hope. Winning six of the last 11 games in 2019 to stave off a sixth wooden spoon made many believe the beginning of the resurgence had started to materialise. The team was coming together, but a questionable depth in the midfield and in the small forward department needed addressing.

Patrick Cripps was doing all the heavy lifting in the middle, so the talk of bringing in somebody of the quality of a Stephen Coniglio would have given the midfield two A-Graders. The previous season the Blues made a play for Josh Kelly, but that wasn’t to be, nor was it even close really. The possibility of landing “Cogs” seemed a more realistic chance than his young teammate the previous year, and us supporters were daring to dream of the scenario of Cripps feeding the ball out to Coniglio who pinpointed Curnow’s chest inside fifty with a spearing pass. But all that proved to be more of a delusion when Coniglio put pen to paper on a seven-year deal which sees him end his career with the Giants.

By the time trade period came around, Blues fans dared to believe the club was once again becoming a destination club as the likes of Papley and Martin expressed a desire to don the Navy Blue along with Eddie Betts returning to the club after a six-year absence. Suddenly we would’ve gained two small forwards whose goal tally in 2019 was vastly greater than our best forward’s output and it seemed for a fleeting moment we’d end up with the forward line other clubs would envy with a bevy of tall marking forwards and two of the best crumbers in the game.

The trade period started well. The Eddie Betts signing was done early, and there was a small lump in many Blues fans’ throats as he spoke of “coming home”. Part one of the fairytale was complete. Eddie returned, albeit in the twilight of his career. That said, I believe he will be good for 30-40 goals in 2020 barring injury or a serious drop-off in form.

So thumbs on the Betts deal.

It was then time to turn our energy to securing gun-forward Papley of the Swans and Jack Martin from the Suns. Papley had another very good year, winning the Swans’ goalkicking award, while Martin was, at times, indifferent with his form. I think most avid football followers do recognise the untapped potential there, so it’s understandable why a club like the Blues would want him.

As the trade period wore on, it started to become obvious that the Papley deal was going to be difficult, and it seemed that the Gold Coast Suns wanted a hefty price for Martin as well. So, it came to pass we missed on both. The level-headed folks among you would say it’s no big deal. They’d say Essendon not giving in to Sydney’s dealings for Daniher killed the Papley deal, while some others would say missing Martin in this instance was only temporary as the Blues may get him for nothing in the pre-season draft – at least that’s what many believe will happen, but there’s still a few other possibilities there.

So, with all that in mind, did SOS do a good job?

Many say yes. Many believe he held firm and didn’t give up the farm to get these deals done. Many believe what was being asked of Carlton was way over the value of the two players in question. You also have those who believe these two players are very much what we need at Carlton, and the mere fact they nominated us should mean we needed to do whatever it took to make it happen.

I’m somewhere in the middle. You see, I’m one of those people that believes we don’t need any kids this year. Our list is already considerably younger than most. As well as that, the talk this year is that the draft is not particularly strong. Carlton have already got their fair share of single-digit draft picks that haven’t reached great heights. Could this year’s number nine pick be just another one of those? I guess we won’t know for some time.

Since Silvagni became our list manager, we’ve turned over and incredible amount of players and have some genuine talent waiting to explode (we hope) in 2020 and beyond. But the big fish from other clubs have continued to elude us. Many also criticise the fact Silvagni brought in recycled players from his old stomping ground which bore little fruit. In fact, of the 11 brought in, only four remain on the list.

The GWS experiment is hopefully over for now. I won’t be too critical of the list manager. For the most part, no high quality, ready-made players wanted to come. In previous years he had holes to fill and that’s always going to be a bit hit and miss. We did get Mitch McGovern last year, and I still think he will prove to be valuable, but 2019 is a year I’d say he’d rather forget.

This was the year where it seemed a few players with currency wanted to come on board, and this is the reason why supporters are so frustrated. Finally, we were looking like a destination club, only to see the deals fall over. More than ever, the long-suffering Blues fans need hope.

The Teague appointment seemed to be the beginning, although how can you really know until he has spent a full season in the head coaching role? The signs are good, but I’ll reserve my judgement until I have some concrete evidence that he is the real deal. The signings of both Martin and Papley would’ve given Blues fans an extra spring in their step during the off-season period. It would tell the fans that there’s something brewing that other teams’ stars want to be a part of. It would say that we are returning to the days where we could land a big fish and fill a gaping hole in our on-field endeavours.

It didn’t happen. And many of us are wondering if it will ever happen again.

So, while I’m not screaming for the blood of Silvagni like some who I’ve seen on various Carlton social media pages, if Jack Martin doesn’t find his way to Carlton via the pre-season draft, I might lose my patience and join them…