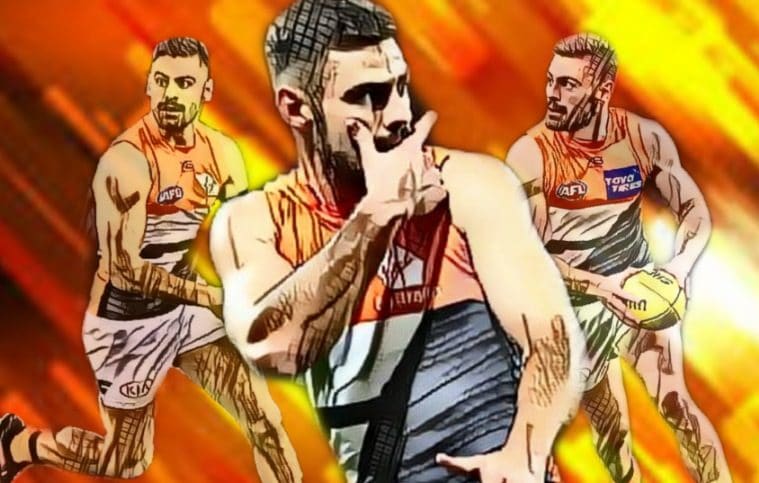 Run, Rabbit – Can Stephen Coniglio Turn The Giants Around In 2021?

I was in my early thirties when I first stumbled upon the book Rabbit, Run by John Updike. It painted the picture of a young man dealing with a life that was not panning out quite the way he envisioned.

A dead-end job, a marriage that was not looking like the great romance he imagined and a flight into a different life no better than the one he was in prior underpin the story of a man without direction. In many ways, he is a man without a clue.

I am not ashamed to state that, at points in my life, I was able to relate to some of the things ‘Rabbit’ was going through. Life wasn’t as easy or exciting as it had been made out to be. It was hard work – at times monotonous with the light at the end of the tunnel seeming more like a candle in the distance at times than an opening into a new world.

A bit dramatic for a Mongrel Punt article, you think? Maybe so, but part of me wonders whether there was a point in 2020 when Stephen Coniglio (Italian for ‘rabbit’) sat back, took stock of his life and wondered if this AFL thing was all it was cracked up to be?

Sure, he had just signed a multi-year deal, tying him to the club until the end of the 2026 season, but if he was expecting things to fall nicely into place in his first season as skipper of the team, he could not have been more wrong.

I’m not sure Stephen Coniglio could have a worse year if he tried in 2021.

Named the sole captain of the GWS Giants and coming off a pretty impressive run in the finals before his team fell to the Tigers, and fell hard, in the Grand Final he was unable to play in, big things were expected of the GWS leader after recommitting to the club that drafted him.

But the 2020 season, as difficult as it was for most players, seemed to sap the life out of Coniglio, with people questioning his leadership, commitment and form at points along the journey. With the Giants faltering and becoming the third team in the last 12 years to go from grand finalists to non-contenders, missing the top eight, Coniglio found himself at the helm of a sinking ship. This journey, often savoured by players as much as the destination, ended up as a road to nowhere.

Then, all of a sudden, he was no longer even able to steer the ship at all.

In a frank discussion with GWS coach, Leon Cameron, to be aired as part of Amazon Prime’s ‘Making Their Mark’ docu-series, Coniglio faced the confronting news that he would be the first captain of an AFL club to be dropped from the senior team since John Worsfold was left out of the West Coast Eagles side in the 1998 finals series. Yep, he was the first this century to have such a dubious honour.

With his own form a worry, his club unable to sustain any semblance of good football and his coach ringing changes left, right and centre to try to salvage something from the season, and ultimately failing, the first season as GWS captain was an absolute shocker for Coniglio.

If he were to rate his season on a scale of 1-10 against his expectations, I reckon a two would be generous. But with all that occurred during the 2020 season, and all the shortcomings of the club, his teammates and himself, many are speculating that the worst is yet to come.

Surely, things cannot get worse, can they?

The loss of Jeremy Cameron to Geelong is a blow that has hurt many GWS supporters. Their nine-time leading goalkicker was one of the original Giants, a pre-draft selection for the young club that was meant to point them in the right direction on the pathway to success. However, after being one game away from the ultimate prize in 2020, watching the club fall into mediocrity, Cameron’s patience ran out. Their failure to make finals hastened Cameron’s decision to leave, although watching his effort in 2020, some could argue that Cameron’s lack of form and dedication added to the club’s rapid decline.

Zac WIlliams was another seeking less orange and charcoal pastures after plying his trade off half-back for years. Williams headed to Carlton, where midfield time should be easier to come by. Whilst the loss may hurt the Giants, part of me feels that they let Williams go at just the right time. He was huge in 2019 when the GWS midfield was plagued with injury, but was unable to replicate the form in 2020, appearing to be in worse shape than the previous year. Unless Carlton get the 2019 version of Williams, the Giants will not miss him too much.

They also waved goodbye to Jackson Hately and Jye Caldwell – both struggling to secure time in one of the most potent midfield units in the game. Whilst both will be handy acquisitions, and may even kickstart their careers at their new clubs, the Giants will not pine for their presence.

With an on-ball division boasting the likes of Josh Kelly, Tim Taranto, Jacob Hopper, Matt de Boer, Lachie Whitfield, Cal Ward, Coniglio and the emerging duo of Tom Green and Lachie Ash, the Giants did not need any more midfielders pushing for a spot. Not Williams. Not Hately and not Caldwell. They could afford to pick and choose who they wanted in the middle. In short, those three were not their priorities.

That’s not to say they won’t have a significant impact at Carlton, Essendon and Adelaide, respectively – they will, but the GWS midfield was stacked, and even without them, remains so.

In losing the talent listed above, the Giants managed to alleviate some of the salary cap pressure the club was experiencing, which saw both Tom Scully and Jon Patton join Hawthorn. These moves that were lamented by many at the time, now see the Giants emerge as the possible winners in those deals, even with the minuscule compensation received by the club in return. Scully has hung the boots up and Patton… well, that’s a story for another time, and probably another website.

With a plethora of young stars emerging year after year, the club retains a strong core group, despite the continued exits.

And this is where Coniglio finds himself headed into 2021, leading a team that lost their way and their identity in 2020. Many are expecting the Giants to fall further, but with talent to burn, these people may be dancing on the grave of a club that is not quite dead yet? Like someone’s grandpa with the plague, they simply aren’t ready to go on the cart.

In recent days, Toby Greene has been elevated to the vice-captaincy of the club. Whilst he has his critics, Greene bleeds orange and charcoal. There has never been a moment where he seemed destined to leave the club, nor has the club felt compelled to offer their star something extra to keep him at GWS. Aside from a great contract, of course, extending Greene’s deal until the end of 2024 a couple of years back.

Greene is the spiritual leader of the club, and his rise to a position of leadership to support Coniglio could be important. There are some GWS supporters who believe that Greene could have been named captain, and they speculate that the deal to keep Cogs at the Giants may have involved sole captaincy as a sweetener. If that is the case, the elevation of Greene to a leadership role with Coniglio may be the move that ties the team back together.

So, what does Stephen Coniglio need from the 2021 AFL season to reinvigorate this GWS team and make them a contender?

His own form is paramount. In 2019, Coniglio averaged a goal per game for the second straight season before falling away to average just 0.3 in 2020. His ability to sneak forward and get on the end of goals was missing last season, despite the fact he sometimes started quarters playing forward. Gone was the element of surprise, replaced instead with a predictability from Leon Cameron – and a direct opponent assigned to stop him.

The rest of his numbers are commensurate with his previous seasons when the reduction in game time is factored in, but they fail to address one important criteria – leadership. When the team needed someone to step up and make a statement, Coniglio was not the man to do it. Not in 2020, anyway.

When you look at Richmond, Trent Cotchin is no longer the player he once was. He is not a 25 or 26 disposal per game midfielder, but his impact in individual contests is not accurately measured by numbers. He remains a difference-maker in the way he attacks the footy and WHEN he attacks the footy.

Ditto for Joel Selwood, whose numbers may have dropped over the last few years, but his commitment to the cause has never wavered.

There are the leaders who inspire their charges to follow them – not with words or by a bestowed leadership title, but by actions. And this is the component that Coniglio was missing last year.

I make it sound easier than it is. Playing football at this level is difficult enough – leading a team at this level is something else, entirely. In 2020, Stephen Coniglio received an education in what is required when it comes to being an AFL captain, and by proxy, he received an education into what is not required as well. He enters the 2021 season with a renewed hope and a team that has been written off – I’ve written about the “no one believes in us” mantra the Giants could easily adopt. It is a powerful motivational tool when used correctly.

Coniglio could do worse than adopt it for himself, after 2020 – do people no longer believe in him?

With St Kilda at home, followed by Fremantle on the road, Melbourne at home and Collingwood at the MCG, the Giants’ 2021 litmus test comes in the first four rounds. Are they able to recover and revitalise this club after such a disappointing season? And is Stephen Coniglio able to marshall the troops with his new right-hand man to finally put this enormously talented core to their best use?

Stephen Coniglio entered the 2020 season as one of the most revered mids in the game. It seemed as though it was his time to shine. He ended the year engulfed by nothing but doubting dark clouds. If the GWS Giants are to once again play finals and make a big, big sound in 2021, it all starts and ends with the captain,