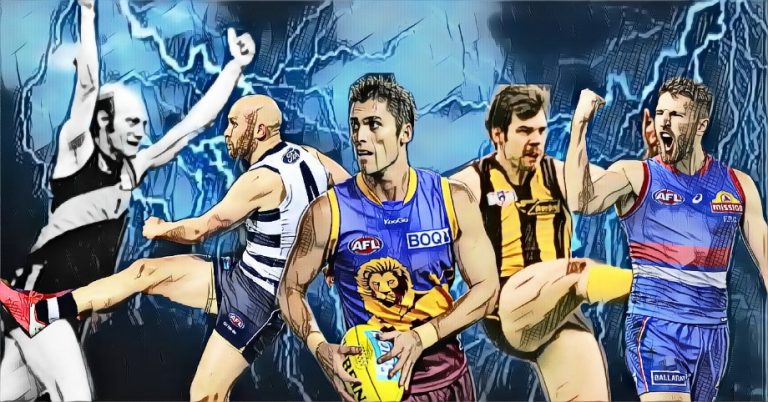 The Best Player on the Best Team

… unless you’re a Geelong supporter, I guess?

With Jeremy Cameron and Cam Guthrie tying for the Carji Greeves Medal, it adds another two names to the list of players who had the best season on the best team of the year. It is the first time for each of them, and it was well deserved. But there are some players who have made a bit of a habit out of winning B&F awards in premiership years.

In the past 40 years, it is a feat that very few have been able to accomplish – being named the Best and Fairest player in premiership years.  A lot has to go your way to receive this accolade – first of all, your team needs to win the flag more than once, and as supporters of teams like St Kilda and Fremantle will attest – winning it once seems so far off at times.

The second aspect is competition within your own side. Premiership teams tend to be stacked with talent. Whilst a champion team will always beat a team of champions, having two or three of those champions on your side in big games never really goes astray. What this also means is that there is a lot of competition for the Best and Fairest award at your club when you’re at the top.

Whilst guys like Bob Skilton and Kevin Murray hold the record for most Best and Fairest awards ever (nine apiece), and both have Brownlow Medals to their name, neither man can really lay claim to being the best player on the best team.

Some may argue that being the best player on the best team is what the Norm Smith Medal represents. Being the best player on the biggest day of the year carries enormous weight, and players who win the Norm Smith are rightfully celebrated, but it doesn’t reward a great year the way a club B&F award does. The Best and Fairest award looks at your contribution to your team over the course of the entire season. Was Shaun Hart Brisbane’s most important player in 2001? Or Jason Johannisen for the Dogs in 2016?

The Best and Fairest award is recognition of just how important your role was to the team’s success throughout the entire season. In a premiership year, the person standing on the dais, accepting the award in front of the entire club is acknowledged as pivotal to the team’s achievements. In recent years we have seen Elliot Yeo, Dion Prestia, Jayden Short, and Clayton Oliver become B&F winners in premiership seasons – each of them obtaining that accolade for the first time. Surrounded by their peers, the administration, the coaches and supporters, these men are honoured as the most important piece of the premiership puzzle for that entire season. It’s an honour that is regarded highly amongst players, but does not get the recognition it deserves amongst supporters.

Finally, there’s a stat where Dunstall fares better than Tony Lockett. Other than premierships, that is.

Dunstall really established himself as one of the premier full forwards in the competition in 1988, racking up 132 goals at an average of 5.7 goals per game. He repeated the dose the next year with another 138 goals, at the marginally better average of 5.75 per game. However, it was the little things that Dunstall did that made him so important to his club’s premierships. The small knock-ons, the chase-down tackles and the ability to make those around him better were recognised by the club, as Dunstall accepted the back-to-back Peter Crimmins Medals as Hawthorn’s best in 88-89.

Unlucky to miss out on the Brownlow Medal several times in his career (2nd in ‘88 and ‘92, and 3rd in ’89), Dunstall received the recognition he deserved from the Hawks. Would they have been able to win back-to-back flags without him? Doubtful.

The Brisbane Lions of the early 2000s will go down in history as one of the greatest collections of talent of all time. Their midfield was as dominant as you’ll ever see, boasting the likes of Jason Akermanis, Nigel Lappin, and Black. Yes, we’ll get to Michael Voss very soon.

Black was the class of the Brisbane midfield unit, firing out handballs and running all day on his way to averaging almost 25 touches per game in 2001, and just over 23 per game the next year. His silky skills and great decision making stood out to the Lions, and they rewarded him with back to back Merrett-Murray Medals in 2001 and 2002 as the Lions rolled to consecutive flags.

It’s when you look at the competition for votes in that Brisbane team that Black’s achievement truly shines. Aside from those already listed, the team boasted names such as Jon Brown, Luke Power, Mal Michael, Justin Leppitsch, Alastair Lynch… the list goes on.

Black shared the award in 2002 with the next man on our list, but his consistency through their premiership years was central to the Lions’ success.

If Simon Black was the silk in those Brisbane premiership teams, then Michael Voss was the grunt. He was like a wall that moved, and moved quickly. You didn’t want to run into a moving wall.

Voss bullocked his way to 24 touches per game in 2001 and was back to his best in 2003 for the last of the Lions’ flags, notching up 21.4 touches a game. It’s not stats that tell the story of Michael Voss, however. His leadership and ability to stand up when it counted were the things that made him one of the greatest Lions ever.

In the second quarter of the 2002 Grand Final, Collingwood’s Scott Burns dropped Voss with a nice hip and shoulder (would get four weeks for it now) that would’ve kept other players down. Voss immediately bounced to his feet like he was in a Rocky movie and was instrumental in the very next piece of play, resulting in a goal to Simon Black. Then he let Burns know all about it.

Voss was a footballing beast that could’ve played in any era. That his contemporaries are James Hird, Nathan Buckley and Mark Ricciuto should speak volumes, but awards like this in premiership years eluded all of those peers.

The Little Master has had more accolades in his career than he has places to keep them, but two that would take pride of place would be his Carji Greaves Medals from 2007 and 2009.

Whilst the Cats would go on to win a flag without him in 2011 after his departure to Gold Coast, Ablett’s contributions to Geelong in those premiership years were outstanding. Gaz made the big leap when he improved his disposals per game from 16.86 per game in 2006 to over 26 per game in 2007 to claim his first medal. He then kicked it into high gear, averaging 33.8 touches for the Cats in 2009.

Add to that over a goal a game in each of those years, and his importance to Geelong is evident. Who knows how many premierships Geelong may have had if Gary had stayed in Sleepy Hollow?

Corey Enright always seemed to be in the right place at the right time for Geelong, sweeping across half back and cutting off opposition attacks as though he possessed a crystal ball, and running the ball through the centre to propel the Cats into attack. Enright, along with partners in crime, Joel Corey and Harry Taylor, made Geelong a superteam, and made it easier for Matthew Scarlett to defend the big forwards of opposition teams.

He averaged over 25 touches per game in 2009 to share the B&F with Ablett, and backed up with 22.3 per game in 2011 to propel Geelong to their third flag in six years.

There was no one happier to see Brian Lake turn up at Hawthorn than Josh Gibson, and the results after Lake arrived demonstrate why. Gibson was lumped with defending the power forwards for many years for the Hawks despite being outsized. With Lake taking on the likes of Tom Hawkins and Travis Cloke and more often than not winning, Gibson was released to prowl the Hawthorn half-back line, and he did it exceptionally well, being rated as ‘elite’ in spoils by Champion Data up until 2016.

Gibson made spoiling an art form at Hawthorn, and the club rewarded him with two Peter Crimmins Medals in 2013 and 2015.

There is a very good reason the next two players have obtained Legend status in the AFL Hall of Fame. They are the only two men to win three Best and Fairest Medals in Premiership Years.

I really think people forget just how good Kevin Bartlett was. He has one Norm Smith Medal to his name, if they awarded retrospective medals, he’d have two. But what he does have is three Jack Dyer Medals in years where the Tigers ruled the VFL roost.

With speed and skill, as well as an ability to read the ball off the pack rarely seen, Bartlett built an incredible career with the Tigers that saw him star for over 400 games.

The first of his Best and Fairest awards came in 1967 where KB averaged over 22 touches per game and almost two goals. Bartlett starred again in 1973 when his Tigers knocked over Carlton, averaging 29.22 disposals and 1.35 goals per game, and then again in 1974 when he notched up 29.41, and a fantastic 2.14 goals per game.

Bartlett was a prolific midfielder in the first half of his career and moved forward more regularly as the years went on. Three B&Fs in premiership years speak to just what an impact KB had on the game. He may be a crotchety old man in the Melbourne media now, but he was an absolute star of the game in his day. They don’t just build statues of anyone outside the MCG.

As if Leigh Matthews hasn’t already had enough honours bestowed on him over the years, he gets another one here. Along with Bartlett, ‘Lethal’ can claim to be the best player in the best side three times during his stellar career.

Whilst Bartlett did it with finesse and speed, Matthews added a rugged brutality to his game that, when combined with his supreme skill, created a weapon the league has not seen since.

1971 saw the Hawks knock the Saints over in the Grand Final, with Matthews averaging almost 23 touches and 1.8 goals per game.

In ’76, the Hawks bested North Melbourne and Matthews was spending more time forward. Still, his numbers of 22.5 touches per game to go along with 3.23 goals are outstanding.

Finally, in 1978, the Hawks got over the line against the Kangaroos again, with Matthews collecting 25.5 touches and 3 goals a game.

But it wasn’t just the possessions and goals that defined Matthews. Lethal Leigh dished it out with the best of them. In incidents that would see him receive lengthy suspensions now, Matthews would put fear into the opposition players and supporters. Players would always have to look over their shoulders when playing Matthews’ Hawks.

Leigh Matthews deserves every accolade he gets. Some rate him as the best to play the game, and those who saw him play in person nod sagely when that is suggested. Is he the best? Well, he has been the best player on the best team of the year three times; an honour shared with Bartlett. He’s in great company.

Looking at the current crop of players sitting on one season as the best player on the best team, the only blokes capable of joining this club are as follows.

I wouldn’t mind backing Clarrie to join them by the time all is said and done.