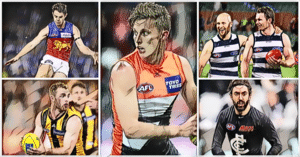 In light of Lachie Whitfield not only joining the 50-club this past weekend, but vaulting up to the equal third highest score we have on record, I thought it was timely to revisit an article we wrote earlier in the season.

The Giants ran rampant over the Blues, with Whitfield starting strong and getting stronger as the game went on. he hit the mark in all four statistical categories required to hit the magical 50-point mark, becoming the first to do so this season.

It’s a relatively simple equation in a sporting landscape that tend to overcomplicate matters at every turn. Points + Rebounds + Assists + Steals + Blocks = the total score of an individual player. If you’re tracking at 42 points or over, you’re performing well. If you’re under, you’re probably playing a role and not a genuine star of the game.

This is not meant to be some sort of revolutionary idea – more thought usually goes into ideas as of that nature. It’s just a novelty kind of stat that may be of interest to some. Save the “you’re Americanising out game” stuff, please. If you don’t like the little more outside the circle stats, you may as well stop reading.

In regard to getting a simple game score for Aussie Rules Football, I started thinking that if we simply add possessions, tackles, marks and goals all together, we may get a total number representative of the impact a player had on a game, or at least his standing in the game as compared to his peers?

But how about if we counted only effective disposals?

I still thought Mitchell would make the cut in this game. It seemed as though he was more or less over the line before he started, with the possessions alone, but the elimination of ineffective disposals had a significant impact on his total score. He scored 48 total points, falling short by two, due to inefficiency with the ball, with “only” 36 of those 54 considered effective. He also only laid two tackles for the game.

Let’s take a look at Jeremy Cameron’s seven goal blast in Round Three in context of achieving this number. Much was made of his 30 possession, seven-goal game against the Tigers, but 13 of those 30 touches were deemed ineffective. As a result, his net result in this formula is a score of 43. Miles off the mark. He had no tackles in the game, and while he pulled down nine marks, his inefficiency with the ball cost him.

How about Lachie Whitfield’s other big outing this season? He has had a blistering start to the year. In Round Three, he racked up 48 total points on the back of 42 touches (32 effective), 12 marks and four tackles. He was close, but the score of 50 isn’t a “near-enough is good-enough” kind of stat. You don’t get a hundred metres from the peak of Everest and turn around. If you don’t get there, you haven’t conquered it.

It was a case of third time lucky for Whitfield, who took until round Nine to climb Everest and reach the peak. His 31 effective disposals, 18 marks, three goals and four tackles got him to 56 overall points.

Is it starting to hit home how hard this number of 50 is to achieve? Cameron, Neale and Whitfield have had cracking games this season, and it took something amazing from the latter to finally crack it! It may also put Mitchell’s 60-point game in context? I think the magnitude of that performance was lost in what was a possession-fest of a year.

I think we may need to go historical to find some more company for Mitchell.

A few of you threw Nick Riewoldt’s 26 possession, 21 mark and nine goal effort in 2016 out there as a possibility. Close… but no cigar. He had only one tackle, and only 16 of his disposals were considered effective, for a grand total of 47.

Dropping 50 now sits as an elite indicator in the Mongrel Stats realm. Along with the Quadruple Double, and the unconquered 50/100 club, it is a statistical milestone very few men manage to reach.

Who will be next, and who have we missed. Let us know.