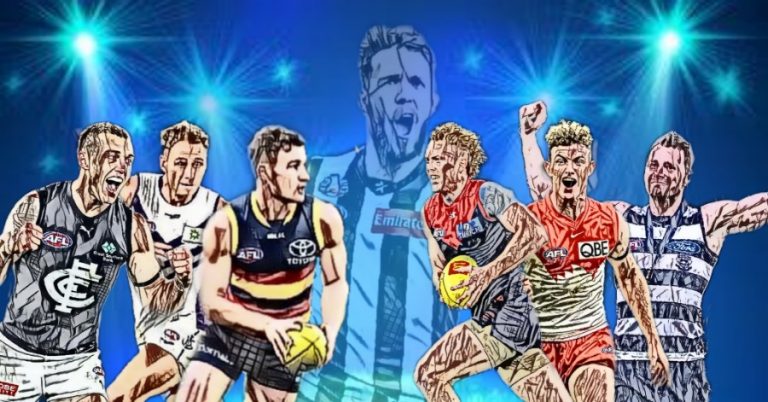 The 2022 Swannies – The Mongrel Midfield Awards

Here at The Mongrel we love to do things a little differently. Three seasons ago, we introduced the first of our annual specialised awards – The Pluggies, for the best offensive efforts of the season, but far from being entirely swayed by those who kick bags of goals, we were looking to be an equal-opportunity award giver.

We then went on to award The Doullies for the most outstanding defensive efforts of the season. Both of these awards had their third incarnations over the last couple of weeks.

And so, we’re now looking at the mids. With these blokes, we’ll include the rucks as well.

But wait, isn’t the Brownlow the midfielders’ award anyway? Well, yes it is – nice pick-up; I can see I’m dealing with some smart cookies, here. We’re more about drilling down into the nitty-gritty of the midfield. Who was best at getting their hands on it first? Who created the most damage going forward? Who did the best tagging job of the season? And who is the man who… ummm, did other stuff that I haven’t yet finalised… better than everyone else?

Initially, I wanted to call this award “The Juddies”. I thought it had a bit of a ring to it, but the more I thought about it, I came to the conclusion that I didn’t want an award named after Judd. I thought it might start taking itself too seriously and possibly bore people. I needed an award named after someone that doesn’t think too highly of himself… or at least doesn’t mind taking the piss out of himself. Someone like… Dane Swan?

And just like that, the award for mids from the site not taking itself too seriously was born. In honour of the former Collingwood champ who seems to give less than half a toss about the people who have a crack at him, we have our fourth annual Swannies. It’s not the Oscars, it’s more prestigious than the Logies, less prestigious than the Montgomery Burns award for Outstanding Achievement in the Field of Excellence, and it certainly fits right in with the Pluggies and Doullies.

Ladies and Gentlemen, I give you, the 2022 Swannies. Let’s kick it off.

AND THE WINNER IS… CLAYTON OLIVER

What a star this bloke is.

Clean hands, sees the game unfolding before everyone else, and if you don’t tackle him and make sure you lock the damn ball in, he somehow manages to get his hands free and dish it off to a teammate.

I love watching Oliver play – you can tell he has a hunger for the footy that will never be satisfied, and with four Best and Fairest Awards and three seasons with 400+ contested possessions (only one other man can match that), this bloke is on track to be remembered as an all-time great.

THE RON JEREMY “Hey, that’s some mighty good tackle you have there” AWARD for the best tackler in the game

AND THE WINNER IS… RORY LAIRD

Pretty harsh here, to have Sam Berry – the most consistent tackler in the game – usurped by a teammate who just went out and notched a lazy 20 tackles in a single game!

I love what Rory Laird provides for the Crows – he is a no-bullshit player who puts his head down, goes to work and just continues winning the footy. And then he goes out and adds a 20-tackle game to his CV… well deserved.

I felt I should note the efforts of Berry, however. As he had five of the top 20 tackling games of the season, and had 18 in the same game that Laird had 20.

LACHIE NEALE – 15 IN THE ELIMINATION FINAL

AND THE WINNER IS… LACHIE NEALE

Miller would feel pretty stiff for missing out on this, but when it comes down to it, Lachie Neale did it on the big stage of AFL Finals and without him, I reckon the Lions fall over against Richmond.

Neale also added 21 contested touches and 39 possessions overall to his stat sheet, as he powered the Lions from the middle all game.

AND THE WINNER IS… FINN MAGINNESS

This is a bit of a surprise.

I am using our Defensive Player of the Year rankings as my guide, here, and Maginness was the highest-rated tagger of the season – even receiving more overall points than Ryan Clarke, who did his defensive work tagging the dangerous half-backs (which is why he does not feature in the running here).

Maginness had his best games against Shai Bolton, who he held to 13 touches and kept his impact at a bare minimum, and Touk Miller, which is just about the toughest assignment in footy.

THE SAMWISE GAMGEE “Get on my back and I’ll carry you the rest of the way” award for carrying your team to a win.

AND THE WINNER IS… PATRICK CRIPPS

Right up there with the Brownlow, I am guessing?

Maybe not, but if we trip on back to Round One and remember the recent record of the traditional season-opening pair, the Blues needed something special (even though this wasn’t actually the season-opener this year).

They got it from Cripps, who not only knocked up thirty touches in a powerful midfield effort, but he also drifted forward to snag a season-high three goals, taking big marks and converting.

Often, there has been an argument that Cripps dished off to the side, or backward too often. It is the same weak argument people make against Lachie Neale and Tom Mitchell, so to see Cripps run hard forwards and hit the scoreboard… it kept people’s mouths closed for a change.

AND THE WINNER IS – WILL BRODIE

After a couple of years with the Suns where he simply could not get a look in, Brodie took his second lease on an AFL life very seriously, and though the Dockers would come into the season worried about the impact of not having Nat Fyfe, Brodie made them start wondering how the two would work together once Fyfe came back, given Brodie was absolutely killing it in the middle.

A player who finds the contested footy and loves dishing off to a runner, Brodie was a revelation for Freo and won The Mongrel’s 2022 Recruit of the Year.

AND THE WINNER IS… TOBY NANKERVIS

People keep trying to convince me that ruckmen don’t matter as much in the modern game.

To that, I say that they’re right… right up until one of the rucks gives their team an absolute bath, and that is what we saw the Big Nank do to Port Adelaide in Round 21 as he notched 29 disposals, seven I50s and eight clearances to go with his 44 hit outs as Ken Hinkley opted to play Jeremy Finlayson against him.

The Tigers won the ruck, won the clearances, and won the game. And Nank was a star in the process.

CHRISTIAN PETRACCA – 14 IN ROUND 2

AND THE WINNER IS… CHAD WARNER

Come on, Mongrel… how the hell does that work out?

I’m glad I asked. You see, what I like to see is some of those inside 50 deliveries resulting in scre involvements. Sure, Jayden Short may have had 16, but the only bloke to have double-figures in score involvements to go along with his big i50 numbers was the reigning Mongrel Punt Midfield Champion, The Chad.

For the record, in the games chosen, Short had four score involvements, Oliver had nine, Petracca had eight, and LDU had eight, as well.

Made it an easy decision.

AND THE WINNER IS – PATRICK DANGERFIELD

It’s been overdue… Danger needed a big one in a big game, and he got it in the 2022 decider.

Sure I could have gone with Isaac Smith, but the pressure was on Dangerfield in this one. After the capitulations over the last few years, there were a lot of people questioning whether he would ever get the cherry on top of a stellar career.

Hell, I may have questioned it, too.

I am not sure Smith has ever had to deal with that type of pressure. I am not sure he feels pressure… unless kicking at goal to beat the Cats. Yes, that still hurts.

Danger added the premiership medallion, had 27 touches, had 19 contested possession, and added a huge six direct goal assists to his tally.

The monkey is off the back.

And there we go; the fourth annual edition of ‘The Swannies.

Hopefully, it is taken in the tone it is intended, but you just can never tell with some people… they get so fired up over something so small…much like many of Joe Ganino’s romantic partners.

Thanks to everyone who has jumped on as a member and decided to support us. Your help enables us to produce better content and more of it. 2023 will be a big year for The Mongrel, and we hope to give you more than your money’s worth as members. Hit the link below if you’d like to join.