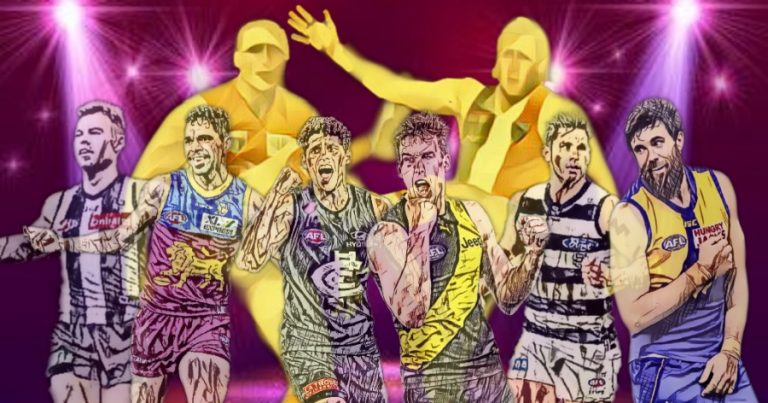 Here at The Mongrel we have a flair for the extravagant. We like to watch football with personality, and none in the AFL have more personality than those who kick the big bags. Let’s face it – we love to see a dominant mid rip the game apart, or a defender completely own the back 50, but there is something about a player getting on the end of a few long balls, and slotting a bag of goals… it’s why you pay to watch the footy.

But there is already an award for the big goal-kickers, right? It’s the Coleman Medal and as we’ve seen in recent years, it is a sought-after award. Charlie Curnow secured the award this time around, making it two Blues in a row, but here at The Mongrel, we want to dive deeper into the art of forward craft to look at more than just a season as a whole.

Hmmmm, slightly sexual, very tempting, but we’re not quite there yet.

Well, it’s not quite the Oscars, and it’s better than the Logies, so it’ll do for right now. It worked last year, anyway.

So, without further ado, the Pluggies for 2022…

AND THE WINNER IS… A TIE – JOSH KENNEDY AND TOM LYNCH

Boooooo, what a cop-out!

Yeah, I know – my heart said Kennedy, as it would have been so harsh to disregard a performance like that in his final game, but my head said Lynch, who basically put his cue in the rack after demolishing the Hawks in the first three quarters.

Bags of eight goals are pretty rare in the modern game and as well as these blokes went on their respective days, each game had a feeling that we could have been witnessing a double-figure outing in the making. I’m happy to wear the criticism… both guys deserve this.

AND THE WINNER IS… JAMIE ELLIOTT

Tough to pick from three very clutch shots, with the game on the line, but there was something special about the effort from Jamie Elliott against the Bombers. Maybe it was the coast-to-coast nature of the Collingwood ball movement. Maybe it was the fact that Essendon kind of blew it. Or maybe it was the way he turned, stared into the crowd with his arms out and drank in their cheers.

Whatever it was, it kind of elevated it marginally above the efforts of Noah Anderson and Jordan Dawson, with Dawson particularly stiff as it was a Showdown and his FIRST Showdown, too.

AND THE WINNER IS… MAX KING

And you thought Max was gonna let Ben have all the fun and grab all the accolades?

Max matches his brother’s output from 2021, narrowly defeating Aaron Naughton, who would have made it three in four seasons. King finished with 52 goals – Naughton with 51.

This was both Naughton and King’s last season of eligibility for the award, so next season, it looks as though we’ll have a new ‘Barely Legal’ champ who is not named King or Naughton for the first time.

AND THE WINNER IS… TYSON STENGLE

A tough one, given the level of talent in the nominations. However, given that Stengle came from nowhere to register 53 goals for the year and was actually playing THIRD fiddle to Tom Hawkins and Jeremy Cameron, he is the player most worthy of the nod.

I am sure it will sit nicely alongside his 2022 All-Australian award, right?

AND THE WINNER IS… CHARLIE CAMERON

But… but… but Tyson Stengle was the All-Australian forward pocket…

Yeah, I don’t care what the AA committee says – Charlie Cameron was the best small forward of the season.

Does it all for the Lions, whilst receiving a heap of defensive attention and comes now with the best soundtrack in the game. Kind of like Malibu Stacey when she got a new hat.

THE JOE GANINO “COULDN’T HIT THE OCEAN FROM THE BEACH” AWARD – Worst accuracy in front of goal.

AND THE WINNER IS… CHRISTIAN PETRACCA

Slipping under the guard of some this season, mainly due to the focus on our runner-up, Shai Bolton, was the inaccuracy of Christian Petracca. The Demons’ star kicked 19 goals for the season but added 31 behinds to his name, as his accuracy radar was completely out of whack.

Petracca was still killing it in terms of score involvements, but his inability to convert, himself, hurt the Dees at times.

As for Bolton, there was one flaw in his game in 2022. Everything else he did was spectacular and precise, but when it came to slotting goals, the mercurial one was only able to slot two more goals than he did behinds.

A little bit more about JK further down, but his efforts in this one were wasted as his Eagles, barely able to raise a gallop all season, once again capitulated, allowing the Crows to run away with a 16-point lead.

Kennedy appeared touched by the crowd reaction to him as he played his guts out for the team that received him as part of the Chris Judd trade… and won the trade hands-bloody-down!

AND THE WINNER IS – BAYLEY FRITSCH

Copped a fair bit of criticism throughout the 2022 season for getting a bit of tunnel vision whenever he was in close proximity to the goals, and I’d say it was justified at one point.

You could see him actively attempting to correct this behaviour later in the season, btu the perception was already set and once it is, it is pretty difficult to shake.

AND THE WINNER IS…  TOM HAWKINS (GEELONG)

The Big Cat blew the doors off the Grand Final with a couple of individual pieces of brilliance early in the game, once again using his supreme body work to muscle his opponent – this time it was Tom Hickey – out of the way to take clean possession and slot the goals to get the Cats off and running.

It was an avalanche from there, and though the Sydney defence tightened up on the big fella (he would kick only one more for the game), it was his early influence that swung the momentum the Cats’ way and gave them the start they needed.

THE KOBE BRYANT “GOING OUT WITH A BANG” AWARD (and no, morbid people, this does not refer to him dying in a helicopter crash… far out! It was for scoring 60 points in his final NBA game. Sickos… 🙂

AND THE WINNER IS – JOSH KENNEDY

As covered above, eight goals in your final game is the stuff dreams are made of.

The Eagles looked to him early and often, to bring their champion into the game, and he did not disappoint, sending the Optus Stadium crowd into raptures with eight of the best.

Some speculated that he should go around again, but JK is listening to a body that has been there, done that, and would struggle to do it again. He made the right choice, and went out with a bang – eight bangs, in fact… sounds like a good time to me.

THE WINNER IS… CHARLIE CURNOW

I had my doubts about Charlie coming into 2022. The dubious nature of his repeated knee injuries… öh, I slipped on the tiles at my sister’s house… of, I hurt it doing rehab at home…” it just sounded like a bloke that we were going to be talking about in ten years and asking “what happened to him?

Well, we can bugger that question off now, huh?

Curnow had a blinder this season – the type of blinder that would make a dad look up what it meant on the phone. He was brilliant across the entire season and was a deserving Coleman Medallist, particularly when you consider he shared the forward fifty with the previous Coleman winner.

Curnow fulfilled potential in 2022 and lived up to some lofty expectations. How high his ceiling is… well, we may just find out in 2023.

And there we go; the fourth annual edition of ‘The Pluggies’.

Hopefully, it is taken in the tone it is intended, but you just can never tell with some people… they get so fired up.