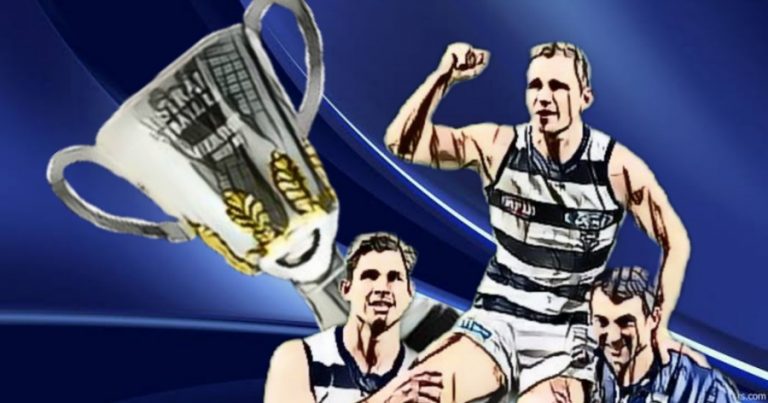 The Greatest Cat Of All

Many players have had the privilege to pull on the hoops in the Cats’ 163-year history but none have embodied the club, the city, and the people like Joel Selwood.

Now, I know that one of the first rules of public speaking or writing articles is to never apologise. I’m breaking that rule today. I grew up in Geelong. I’m an unashamed Geelong supporter, who has no negative words to say about Joel Selwood. As such, this article will be littered with bias – none of which I apologise for, though. What I apologise for is potentially not being able to capture the significance of the influence and impact this man has had on a club, a group of young and somewhat older men, a town, and a national competition.

Up until the end of the 2006 season, my favourite players in my earliest football days were Michael Voss and James Hird. I loved what they did and the way they led. I firmly expected that their leadership abilities and ability to put their team on their shoulders would not be replaced. On that, I was wrong – and I couldn’t be happier I was.

On a crackly radio on a November night, Joel Selwood had his name called by the Geelong Cats – the team he grew up loving and supporting – in the 2006 national draft. Overlooked by six other clubs because he apparently had a dodgy knee … 355 games later Selwood is likely a walk-up Hall of Famer and Legend. Hindsight is a funny thing.

Legend has it that as an 18-year-old, newly drafted to the Cats, that the enduring image of a bandaged Joel Selwood began at his very first training session. This young man drove the standards from the moment he joined the club he spent his youth supporting.

Success has followed Selwood. From winning the Rising Star award in his inaugural season, he followed on shortly after by winning flag number one. And in the four years that followed, he would add a further two Premierships to his CV. Then, as the dust settled on the 2011 Premiership celebrations, captain Cameron Ling retiring, and the winds of change heading towards Kardinia Park, Selwood was announced as the new club captain. The legend only grew from that point on.

I could isolate a number of incredible Selwood moments but, aside from the much-seen moments bookending the 2022 Grand Final, the one that sits with me the most is from a cold, Friday night in Geelong in 2017. Geelong were hosting the Crows in Geelong. As the first quarter was drawing to a close, Selwood flew for a mark and was clobbered from behind, the impact splitting the side of his head open. I was sitting in the Brownlow Stand, next to the interchange bench. You could see the gash from that position and it didn’t look good – a certain well-respected radio boundary rider even saying to his colleagues “he won’t be back after that.” In my head I’m like, “have you ever watched a Selwood game?” And sure enough, just before the siren to start the second term blared, Selwood emerged from the rooms and was ready to resume hostilities. The first contest presented to him, he went in head first, stitches and all, and won the footy. Nothing on the field could sum up Joel Selwood more than this.

I’ve had the privilege to work at the club and to be a fan who has been privileged to share halls and experiences with the legend that is Joel Selwood. And it’s almost weird to write that I’ve idolised a man who is a mere 12 months older than I am; such is the impact that Joel has had upon the people of Geelong. He has become the club. That is a big statement and something that Joel himself would likely refute, but simply looking at the way his teammates responded to him over the years, the way they speak about him, and the fact that one of the ‘Welcome to Geelong’ signs heading into Geelong recently became ‘Welcome to Joelong’ I think encapsulates the way in which Geelong people see this man.

His accolades read like the dizziest of daydreams a man could have upon entering the AFL system. 355 games (making him the games record holder of the Cats) which lead to 259 wins, 1 draw, 95 losses; 4-time Premiership player (once as captain and the only Cat in 163 years to play in four); three-time Geelong Best & Fairest (2010, 2013, 2014); four-time AFLPA Most Courageous Player Award (emphasising the esteem by which his peers held him); six-time All Australian (three of these as captain); 245 games as captain (the most of all-time and the most ever wins as captain); the most tackles of all-time (1799); the most clearances of all-time (1844); and in the top-five all-time for contested possessions, inside 50’s, handballs, and goal assists. Not to mention he broke the record in the 2022 Grand Final for the most ever finals played with 40. Joel also shared the field 305 times with great mate Tom Hawkins, putting them second on the list of most games as teammates. In his 111 games at Kardinia Park, he lost only 14.

His CV speaks volumes about the contribution he had on the field. It puts him in the upper echelon of not just Geelong players, but players from all clubs in terms of what he has produced. He was also runner-up in the 2013 Brownlow Medal behind former teammate Gary Ablett Jr. Whatever you think of Selwood, his record speaks for itself – and yes, I’m aware that people think he ducks and I agree. He has ducked four times, for Premiership medallions. In seriousness, Joel played on the edge, found ways to get the most from his body, and did what he could for his club and his teammates first, every time.

We could spend many hours and superlatives discussing Joel Selwood the footballer. What has been lesser known – albeit with glimpses before and after the Grand Final – are the deeds of Joel Selwood the man.

As the current holder of the Jim Stynes Award in recognition of over 1000 hours of work in the community (not including the not recorded hours) – from mentoring Auskick kids, being a GMHBA Health Heroes ambassador (empowering school-aged children in the region to lead healthy, active lifestyles, with an additional focus on mental health. Then there is the work he did in launching the AFL Barwon region Access All-Abilities Clinics in 2021. And in the days after the 2022 Grand Final stories have emerged of what he has done for Cats fans – from letters, to flowers, to bringing those doing it tough to the club to meet the players, give them merchandise, and then follow up with them after the fact … Joel is a man of the people.

Another, less discussed thing, was what Joel and Brit both wrote when announcing their pregnancy. They reflected on their journey surrounding fertility issues and gave a voice and value to those in the community who walk that same journey. My wife and I walk that journey and it is rarely acknowledged or discussed – yes, Joel walked the journey so he would think of it, but to include that in the pregnancy announcement speaks to the character of the man over all else.

The images of him walking onto the hallowed turf of the MCG with little Levi Ablett in his arms are Iconic and speak to the measure of the man, Joel Selwood. Those images will forever live on in the memories of many. Then, upon receiving his Premiership medal, he gave his boots to the Auskicker of the Year and made sure there were photos (he also went and took photos with all of the Auskickers who presented Premiership medals). And then, there are the scenes of Joel embracing Sammy Moorfoot, the Cats’ spiritual leader and waterboy, post-game and bringing him onto the turf and into the club’s celebrations. Joel made sure to ring Sam’s parents and promise to get him home safely. At the point of his greatest achievement, he chose to celebrate others – that is leadership.

Joel showed his heart and this legacy may live on beyond even his exploits on the football field. You can learn a lot about the character of a man in how he treats those who are vulnerable, who are on the fringes of society … and we have seen how Joel is in those moments. He has and does include everyone and has time for everyone – he did when I was a young fella working behind the scenes at the club, and he still does for any fan that may write to him.

In his own words about playing footy for Geelong, “You don’t go to work at the Geelong Football Club for money, you go for the experience.” Coach Chris Scott also mentioned that Joel’s retirement doesn’t free up a great deal of salary cap space, again emphasising the man that Joel is – he isn’t in it for himself, but for the betterment of the club. In one of his final in-game acts, Selwood crumbed the ball from the deft touch of Brad Close and kicked a running banana from 47 metres, and bringing the crowd to their feet for their battle-weary skipper, the man who would always rise when needed, and do whatever his team needed.

To see him bow out off the back of one of the greatest Premierships won (you know it’s a weird day when I use the words of Kane Cornes) when everyone said it couldn’t be done, it was again Selwood first in the trenches, the man who would make everyone walk taller, and who his teammates and even the public would willingly follow into battle regardless of consequence.

When you consider everything about Joel Selwood the footballer, and Joel Selwood the man, it is clear that he is the greatest Cat of all. Yes, I know of Gary Ablett Snr & Jnr, of Polly Farmer and Bobby Davis, but none of them reach the level of impact, influence, and irreplaceability of the icon that is Joel Selwood. It is indisputable, in my opinion, and some of the other Mongrels (those of us that follow the Cats) that he is greatest Geelong player in the history of one of the oldest clubs. His legacy is beyond compare and he is a legend of the game as a whole. Bias aside, I cannot remember watching or hearing of a player that has impacted the game, an entire club and city, or a broader footballing public like Joel Selwood. In terms of Geelong along, to use the phrase of the great Brett Hart in WWE – Joel Selwood is the best there was, the best there is, and the best there ever will be in the navy blue and white hoops.

I am also confident that when it is available, there will be a grandstand at Kardinia Park (or whatever name it has in future) that bears the name – Joel Selwood. The number 14 has become a symbol of excellence, leadership, and commitment to one’s purpose and others, like no other.

Seeing the Cats run out without Joel Selwood at the front will take some getting used to. Footy won’t be the same without Joel, and I, we, have been privileged to watch him play, lead, and just be one of the best men you’ll ever meet or witness.

Oh Captain, My Captain … thank you! 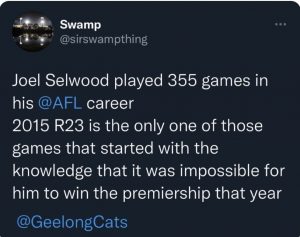