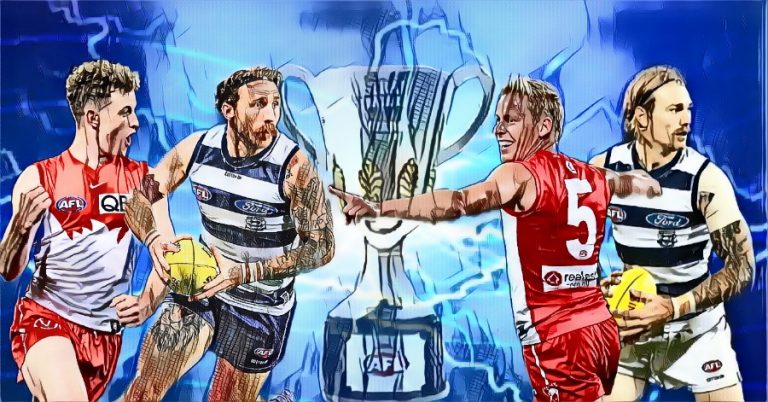 Some of you may be aware of the reviews we conduct here at The Mongrel Punt. We like to dive deep and provide a bit of everything.

One of the formats I use is The Big Questions, which allows me to ask questions I usually know the answers to. However, sometimes, I can surprise myself and ask a question that genuinely makes me stop and think. It’s like doing maths and realising the answers aren’t in the back of the book, anymore.

And that is where I find myself heading into the 2022 AFL Grand Final.

Whilst The Big Questions works well in reviews, in a preview format, it opens cans of worms I may have thought were tinned spaghetti. Really, I don’t know where this game could go, but damn it, it is fun for me to speculate on what could happen.

And with that, let’s jump into The Big Questions as we head into the big one.

IS JED BEWS THE MAN TO KEEP TOM PAPLEY QUIET?

Jed Bews is definitely the best man that Geelong have for the job, but whether or not he gets it done remains to be seen.

Bews has a long list of scalps, and has given players like Eddie Betts and Charlie Cameron nightmares over the years – all to ridiculously low levels of fanfare – but on the big stage, against one of the form players in the game, Bews will have the first crack at shutting down the firestarter of the Sydney Swans.

And if he can keep Tom Papley quiet, the Swans seem to play with a hell of a lot less enthusiasm.

Papley didn’t play in their Round Two clash, but his two finals to date have seen him contribute five goals and, more importantly, set the Swans off and running when he hit the scoreboard.

Papley has been called the best celebrator in the game. He has been called a lot less-savoury things as well, but for the sake of appearing on google news, I will refrain from repeating them. The Bews v Papley contest could be the decisive factor in this game. Papley is capable of kicking multiple goals – he has done just that in 12 games this season, including eight of his last nine games. He is the form small forward in the game and he must be stopped.

Bews could be the best man for the job, or he could just be the best the Cats have got. They would be hoping like hell that if he is the latter, that it will be good enough to stop Papley getting off the chain.

DO THE SWANS RISK PLAYING RYAN CLARKE ON TOM STEWART?

Well, the Cats don’t have a meandering half-back like Nick Daicos, Jack Sinclair, or Bailey Dale for Ryan Clarke to tag out o the game. The Cats have a different type of defensive structure, – one that doesn’t simply rely on one main rebounder.

In recent weeks, you could choose from any of Tom Stewart, Zach Tuohy, Mitch Duncan, Zach Guthrie, or Isaac Smith as their main avenue out of D50. It makes the deployment of Ryan Clarke against the Cats one of definite intrigue.

How does John Longmire use him in the Grand Final, and will he have the faith in the stopping skills of Clarke to play him on the key to Geelong’s back six and attempt to limit his influence?

I know that just above, I wrote about the options the Cats have to exit defensive 50, and I still believe that is the case, but Tom Stewart is more than just another defender – he is the complete package when it comes to being a mix of interceptor, rebounder, and defensive general. He controls that back fifty, and unless someone can control him, he will do as he pleases back there, using his ability to read the play and dictate terms to his direct opponent all game long.

But what happens when someone dictates terms to Stewart? We haven’t seen it in a long while, and frankly, I am astounded that coaches have not structured plans to take him out of the game more often.

The last time a team really drilled down on Stewart was back in Round 15 of last year, if you can believe that? It was the Brisbane Lions, who isolated Charlie Cameron on Stewart and a combination of Cameron’s speed and Brisbane’s tactic of sucking Stewart into giving away silly free kicks helped create a boilover win for the Lions.

I remember that game so vividly, as Stewart had just hit the number one spot on our Mongrel 50 rankings, and I knew that this game would see him tumble down several places (he fell to 13th the following week).

I have no idea why teams have made little to no attempt to get under his skin, but the Swans have someone whose one-wood is doing just that.

The risk here is that Stewart controls the air, as Ryan Clarke is giving up a slight height advantage to the Cat, and despite them both being listed at 85 kilograms, Stewart looks a lot stronger.

I once read a book (hard to believe, I know) called The Lies of Locke Lamora and in it the protagonist wasn’t a great fighter. He was getting his backside kicked and the antagonist taunted him, saying there was no way he could beat him. Locke Lamora knew that. He also knew that he didn’t have to beat him – he just had to hold on until someone else arrived to help.

And that is where Ryan Clarke can get Tom Stewart.

You won’t win the fight one-on-one, Ryan. Just hold on until the help gets there.

Oh, and the book is excellent – highly recommended.

WHO ARE THE WILDCARDS IN THIS GAME?

I like this question – bloke asking them is a genius.

Will Hayward is one that leaps to mind. Great hands, can create, and when given a role on someone, can play the defensive forward position. Part of me wonders whether Horse will deploy Ryan Clarke elsewhere and ask Hayward to do the job on Tom Stewart. I’d love to see it.

Brad Close is a player I’ve watched with interest this year. Tyson Stengle has got all the plaudits, and rightfully so, but people are sleeping on Close. He runs hard u through the wings and then gets involved in handball chains down through half-forward. Creative and elusive, 10-12 touches from him hurt.

Zach Tuohy – you can almost mark him down for a goal, can’t you? You know he wants one, even two days out from the game, he is thinking about slotting one on the run. The most complete Irish import since Jim Stynes? A pretty fair compliment, that!

Ollie Florent has warmed to the role off half-back for the Swans, and I have to admit, some of his defensive efforts in one-on-one contests have shocked me. He is genuinely good at it! I’d like to see him dash off half-back a bit more, but we did see a bit of that in the Prelim… and it was great.

Speaking of dash, The Lizard is one that could light up the MCG with a couple of bursts through the middle. He is a chaos merchant, the likes of which you rarely see. He is Adam Saad without bouncing the footy every three steps, and if he gets off and running, absolutely nobody knows what’s coming next.

Finally, Tom Atkins. He looks like he has been teleported in from the 80s and he plays like it, too. A tackling machine, his work at the coalface often goes unheralded, but Cats fans adore his no-bullshit approach to the game. Quite capable of picking up 15 tackles in a game, Atkins could be key to preventing the Swans from getting the footy to the outside.

COULD SDK BE READY FOR THE BIGGEST CHALLENGE OF HIS YOUNG CAREER?

The Cats have plenty of options to throw at Lance Franklin, but part of me wants this – the young, emerging defensive star given the first shot at the old champion.

The Cats are completely adept at help defence, so I have no fear of De Koning finding himself in a one-on-one situation very often against Buddy, as I reckon players like Kolodjashnij (first time, mate!), Zuthrie, and Jack Henry will relish coming in over the top and killing the contest, but I have noticed that increasingly, so, De Koning finds a way to break even in marking contests, and I reckon he could use his reach and closing speed to give Buddy trouble.

So many teams play with a defensive spare against the Cats, which is really cutting your own throat. When you do that, you give a bloke like Tom Stewart, or Jack Henry the opportunity to kill contests without having to worry about someone putting a body on them. All De Koning would have to do is limit Franklin – engage him for a second or two, and await the cavalry. They’re coming – he knows it.

I doubt we’ll get to see this matchup straight-up, but either on switches, or if a move is made after Franklin starts to threaten, I’d love to see the kid have a crack at the greatest forward of his generation. He is going to be fantastic, anyway… this could be the way of fast-tracking it.

IS THIS DANGER‘S LAST CHANCE AT WINNING A FLAG AS A STAR PLAYER?

If the Cats don’t win, I am sure Danger will go around again, but we have seen a distinct changing of the guard when it comes to elite mids over the past 12-24 months, and that is emphasised by the fact that none of Patrick Dangerfield, Nat Fyfe, or Dustin Martin have made the All-Australian team in that period.

Yes, on his day, Danger can still be THE MAN, but those days are becoming more seldom and we are starting to see the Brownlow Medallist become more of a moments-player than a consistent, 30-possession per game type of player.

Danger has notched 30+ in just two games this season, but the good news is that he has started to develop a real consistency to his game since around Round 20. Since that point of the season, he has averaged 24.4 touches and just last week, he punished the Lions from the middle, hitting the scoreboard twice.

Are “moments” enough to get this Geelong team over the line? Or do the Cats need one more superstar effort from Dangerfield? After going close so often in the last six seasons, is a Norm Smith-winning performance the icing on the cake of a career that is right up there with the best of the modern era?

I am a fan of players making history – I love to see them achieve, so if Geelong wins and Danger wins a flag as an important component of the team, rather than slotting in as a third forward in a year or two, part of me will be more than happy for him.

You’d hate to see him meandering about in a few years, desperately trying to find success. His time is now.

And that ends our free content. The next nine or ten Big Questions are for our members. They have also received access to five or so exclusive columns this week and will get access to HB’s Grand Final review early. Wanna join them and support the best damn independent footy site you’ll find?