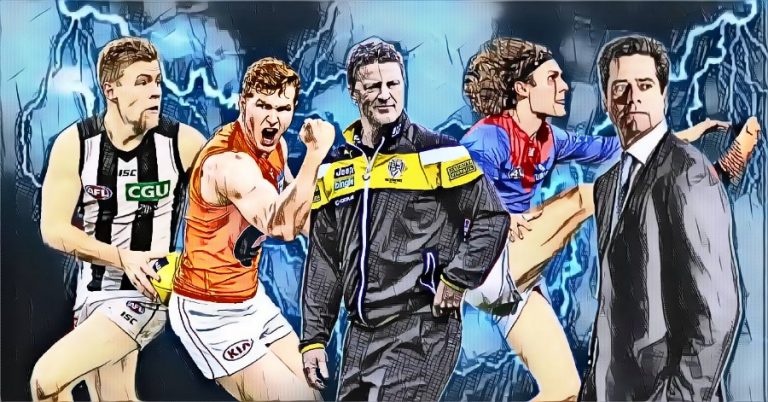 There have been many memorable moments in 2022, both on the field and off. Jimmy Ayres has taken particular note of the words, not the actions, of the players, coaches, and those connected to the game, to bring you the A-Z of quotes for 2022.

Clearly we are sorry to Eddie and anyone who suffered from that camp. Frankly, some of the stuff that went on was a disgrace.

Do you want to die?

Geez, I didn’t think this would come up pre-game, Browny.

Has the game on his boot in his first Showdown!

I want to openly address the relentless pursuit and persecution of athletes by the media to create an uneducated, biased and ill-informed narrative that has gone too far.

I am one of the lucky ones with amazing support, however, not all athletes are so lucky. This will end in tragedy if no one speaks up. It’s time for change

Jack Ginnivan’s got an edge. I was wrong, he kicked five on Anzac Day on the big stage.

There’s an edge about him and I’m on board and I love it.

Neale Daniher is a wise, brave, courageous man and he has inspired us all

All duck, no dinner.

Played on, He played on! The siren’s gone as he played on. It’s a draw!!

Rampe nails him! That could be a match-winning bump from Dane Rampe.

..Understanding that I think I do have an ability to draw free kicks and I think that’s a skillset rather than a flop or whatever you call that.

Come over here and I’ll show you how tough you are.

Xerri knocks it down. Can’t gather, can kick it!

You’ve got the nerve to ask me a question and even be here? So you’ve been preying on us the last two times. You barrack for Melbourne, Tom Morris. You’ve been preying on us. You’ve been opening us up, causing turmoil within our football club by declaring our team well before it needs to be declared. Is that the way Fox want you to operate? Is that what you’re doing- is that the gutter journalist you want to be? Is that, is that who you want to be? Right, so, so, we went in with a plan. We had some late stuff go on with JJ unfortunately coming out of the warmup. Everything other than that was according to plan from the Sunday which somehow you’ve found out about again. So we need to get to the bottom of this. Obviously we need to put our hand up and say that there’s some leakage going on but you’re preying on it and it’s a team you barrack for, your conflict of interest is considerable. And yet your gutter journalism at the moment is killing us behind the scenes. This is why the health and well-being of people in the game is caught up in all this stuff. You know because we’ve got things to concentrate on performance-wise. We gotta look after our own and then you cause all this muckraking trash that happens behind the scenes and names get brought up into it and all we’re doing is planning for a football game. I can’t- are you proud of yourself? You’re proud of yourself? Wow! Do they? No no no that’s enough that’s enough. Next question please. Next question. Mate, you’re not.

Zurhaar! The most likely to fly.