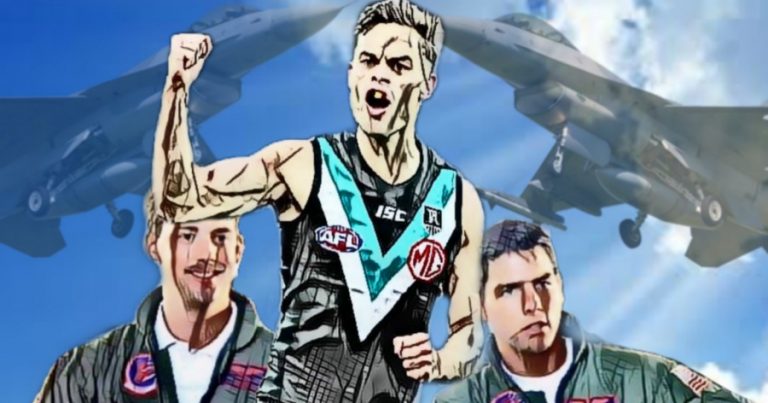 In the end, it came down to consistency.

Whilst in no way attempting to take away from the victory of Karl Amon in the 2022 Mongrel Punt Wingman of the Year, he did get a nice little assist from the opposition coaches, who, like a half-decent lover, started to experiment in the back half.

Was that too far for an intro? I don’t think so…

Amon, himself, spent a bit of time in the middle over the course of the 2022 season, but he would always gravitate back to what has ostensibly been his football home for the majority of his AFL career – the wing. And it was there that he played his best footy for the year.

Amon scored solidly in the final round of the season, notching 31 touches as Port finished strongly to knock over the Crows in another heated showdown, which must have been bittersweet for him, and supporters, as every man and his dog knew by that stage that this was to be the final game for Amon in Port Adelaide colours – he is set to join Hawthorn on a long-term deal this off-season.

Amon has been a picture of consistency for the Power in the last couple of seasons. His numbers from 2022 almost mirror those of the 2021 season (he finished second in the Wingman of the Year last season, so whilst he has similar numbers, his impact has increased) and Port’s reliance on him to run and carry has not waned at all, even with the suspicion that he was not long for the club.

On that topic, it was laughable that journalists were calling for Amon to dropped for the last few rounds of the season, given his lack of commitment to the club. How do these blokes get paid? What Amon was doing in those last few games was demonstrating how to be professional – going out there, running his guts out, and setting a standard that Ken Hinkley could point to and say “See that? He has nothing to gain by working that hard, but he is! I expect nothing less from you!”

Though I am sure there will be boos when the Hawks and Power lock horns over the next few seasons, particularly as the Hawks give up bugger all to get their hands on Amon, there is no question that he has given his all to Port time, and time again over his eight years at the club. He has gone from being a weedy, somewhat timid kid who failed to stand up to the rigors of AFL Football initially, to one of the best at his position.’And in 2022, he was not just one of the best – he was THE best wingman in the game.

As intimated above, the coaching of Isaac Smith probably cost him a chance to seriously contend for the award, as he was thrown onto both the half-forward and half-back flanks for long stretches of games in the last couple of months of the season. Whilst I understand completely the reasons Chris Scott would play with the role – he has players like Zach Tuohy, Mitch Duncan, Max Holmes, and Mark Blicavs all starting in the position, from the perspective of this award only… the tinkering really blew Smith’s chances. At 33, you just don’t know that he’ll get another shot as good as this to grab the award.

Jordan Dawson making the top ten is ridiculous – his entire score was compiled in the first half of the season, and he was the runaway leader at one point. Again, a coaching decision to move him to a half-back cost him in terms of this award, but to look at it solely in that context is both narrow-minded and selfish.

This explains why I am looking at it in that context, I suppose.

Good to see Blake Acres able to recapture some form heading into finals after falling out of the top ten for a portion of the season due to injury. This season has indicated that the penny has dropped for him, as in seasons prior, it seemed as though he had a cruising speed, but no top gear. He rectified that in 2022, and I would be willing to bet that it came off an extended pre-season. Wherever he ends up, if he is able to replicate whatever he did to prepare for 2022, he will be worth his weight in gold.

In the Defensive Player of the Year Award, I made mention of the Fremantle defence providing more options for players to move into other roles – James Aish was a huge beneficiary of their defensive depth. He spent a lot of time on the wing in the second half of the season, both filling in for Acres and Nathan O’Driscoll, and oscillating between that role and a defensive mid position.

And before we jump into the highest individual scorers of the year, Ed Langdon really fell off a cliff in the back half of the season in terms of big performances.

At one stage, he was the outright leader, averaging 46.7 points per week for the first six weeks of the season. Over the final seven games of the home and away season, he averaged just 22.9 points per game and fell from contention to just making up the numbers. As great a runner as he is, teams have woken up that he doesn’t particularly love company. It will be interesting to see whether anyone gets a run-with role on him in the finals.

And just to keep records so I don’t have to go searching, here are the all-time highest individual scorers in a game of footy (award commended in 2020.

As always, this will be a weekly update for our Mongrel Members – thank you so much for your support. Always open to suggestion – you can get me on hbmeyers AT themongrelpunt.com… just replace the AT with the little @ symbol if you have any. Cheers – HB