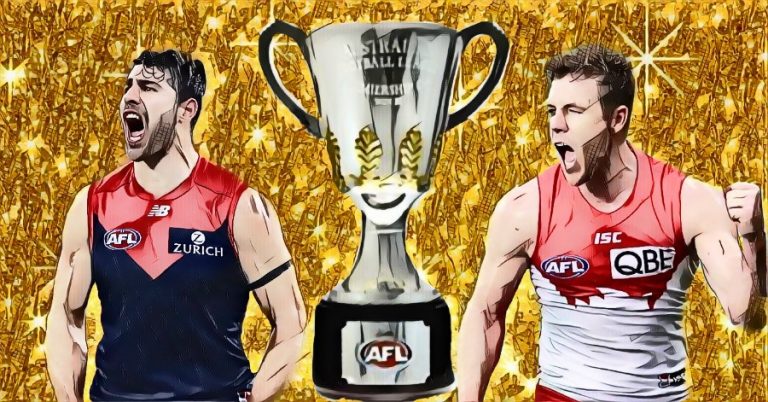 Not content with one, all-encompassing preview, our man, Jimmy Ayres has gone and outdone himself with four separate previews this week. Amazingly, that equates to the number of finals being played this weekend.

Maybe, but I like to put some faith in Jimmy’s planning.

Here’s the preview for the Dees against the Swans

The Demons have won three of their past five games, with big, interstate victories over fellow finalists Fremantle and Brisbane in that time, a last gasp win over Carlton, and narrow losses to two other finals contenders in the Bulldogs and Collingwood at Marvel Stadium and the MCG respectively.

The Swans have won their past seven games on the trot since their surprising upset loss to the Bombers back in Round 16. Three of those wins came against finals contenders (Western, Fremantle and Collingwood), with four games coming from the SCG, two at Marvel Stadium and one at Optus Oval.

Max Gawn was unstoppable with 30 hitouts, 28 disposals, ten score involvements, nine marks (six of which were contested), five clearances and three goals, but it wasn’t enough to counter the efforts of Callum Mills in the middle and Sam Reid up forward.

Melbourne edged out Geelong in the final round of the 1987 home and away season to clinch the final spot inside the top five (the finals system was played with the top five teams in ’87), before utterly destroying North Melbourne in an Elimination Final at the MCG by 118 points. Continuing that rich vein of form, Melbourne would clash with the Swans at the MCG, with the younger, more inexperienced Demons running rampant to win by 76 points. A notable omission for the Swans was their flamboyant superstar forward Warwick Capper, with brothers Greg and Gerard Healy becoming the first brothers to play on opposing sides in a final since 1912.

A pair of 21 year old’s by the names of Jim Stynes and Todd Viney would play their 12th and 15th career Games respectively, with Melbourne legend Robbie Flower playing the hero’s role of the day, kicking 4.4 and entertaining the crowd from the opening minute, with a chorus of “Robbie Flower walks on water” being bellowed out by supporters as the side’s left the ground and entered the change rooms post-game. Melbourne coach John Northey made a comment about the satisfaction of leading a finals victory against the side that had sacked him (Sydney) a season prior.

When you think of blokes in the AFL that will not give an inch, Jack Viney is always one of the first few to come to mind. But in the same breath, I’m not willing to discount Luke Parker’s credentials when it comes to playing an intense brand of football. Both players are highly capable when it comes to ball extraction and both players are equally more than willing to put their bodies on the line at the contest, whether that’s with ball in hand or defensively. Where Parker may excel in the classier stakes, especially around goal, you’ll find Viney more than makes up for it with a tenacity and aggression that has served Melbourne brilliantly, especially in their run to finals.

The mighty superstar from the Swans chalked up his 1000th career goal early in the season, and has since overtaken the great Gary Ablett Snr’s record of 1031 career goals to currently sit on 1045 – only 12 short of the next best in Doug Wade. Franklin has had a strong end to his home and away season, more than two goals in five of his final six games and only failing to score less than two goals in a game once since Round 15. May on the other hand has finished his season just as strongly, albeit in the exact opposite of ways. Since his well-publicised fracas with teammate Jake Melksham over the Bye Rounds, May has produced some terrific football for the Demons and returned to his All-Australian best, coincidentally being named as fullback in the 2022 AFL All-Australian team a week ago. These two have battled out some wonderful exchanges over the years, with both players claiming scalps along the way.

Arguably Sydney’s most productive player this season, Callum Mills only hit a brief patch of mediocrity when adjusting to playing a different role back behind the ball, but since his shackles were loosened, the ultimate utility has found a rich bubble of form this season, enough to be named as a wingman (funnily enough) in the AFL’s All Australian team, for the first time. Clayton Oliver has continued on from an impressive season last year that saw the hard-at-it mid win his third club best and fairest in just his sixth season at the Demons – a premiership year to boot. But with stocks continuing to rise, Oliver was awarded the joint-AFL Coaches Association’s AFL Champion Player Award this season (along with Touk Miller), to add just another feather to the cap of a year that’s seen his stocks continue to rise. The midfield clash in this game is shaping up to be an entertaining one, with Sydney’s young, rotating brigade taking on Melbourne’s tried and true, premiership midfield group.

This will only be the third time that the Swans have played at the MCG this season, with the last time being a 12-point win against the Demons back in Round 12.

The Swans have beaten the Demons in ten of their last 12 meetings, including seven games from the MCG.

Christian Petracca is set to play his 150th game this weekend, against the side that he has had the least success against across his 149 game career – currently holding a 2-6 record against the Swans.

This season, the Swans have been the most efficient team going inside 50. Managing to score 46.4% of the time that they enter their forward 50.

With the exclusion of the two clubs that he’s played for, Lance Franklin’s worst return against *any opposition side happens to be against Melbourne. The superstar forward has only managed 43.46 from 17 games when taking on the Demons, but of those 17, the 35-year-old has played in 15 wins – making his 88% win rate against the Demons the best of any opposition side.

*Excluding Gold Coast, which Franklin has only played ten career Games against, less than any other side in the competition.

The Swans will be looking heavily to their forwards and ball-movers for a winning score, with Melbourne being the best defensive side in the league once again this home and away season, an achievement they’ve now reached for the second successive year. When Sydney beat Melbourne back in Round 12, the turning point in the game was when the Swans took control of the ball in the midfield by forcing the Demons into making uncharacteristic errors.

Tom Hickey and Sam Reid have been a formidable ruck duo in the latter stages of this season, but how will they stack up against the partnership of Max Gawn and Luke Jackson? The latter pairing has been arguably the most productive ruck set-up across the past two seasons, really raising the bar within the competition and proving to be the benchmark for sides playing two ruckmen.

Where To From Here?

The loser of this game will host the winner of the Brisbane/Richmond game in an Elimination Final next week. The winner will go straight through to a Preliminary Final in a fortnight’s time against the victor of the opposite Elimination Final (one of either Geelong, Collingwood, Fremantle or Western Bulldogs).