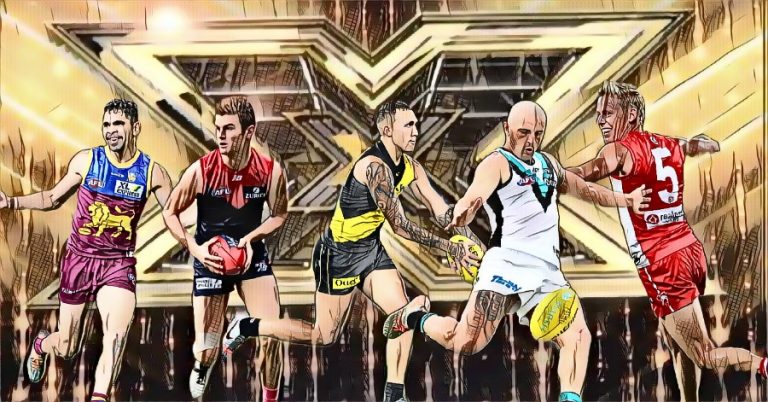 In the wake of Charlie Cameron being snubbed by the All-Australian selectors this year, having Tyson Stengle selected ahead of him, I decided to jump in and have a look at the performances of some of the small forwards in the competition in 2022.

That kind of morphed into what we have here, which I ended up calling the X-Factor Rankings.

We hear the term bandied around by footy commentators and experts quite often – X-Factor.

It is applied quite liberally, with no set criteria to determine just what it is or how good someone is at utilising it, however, when you see it, it is close to unmistakable. Over the past ten years, we know which players have had it – Eddie Betts, Dustin Martin, Cyril Rioli, and Patrick Dangerfield amongst them – all have been match-winners using the combination of speed, skill, and evasion to separate themselves from their peers, yet we’ve never really broken it down, have we?

Well, that’s where we step in at The Mongrel.

Looking at the current crop of X-Factor players in the league, who would you say was most effective over the course of the 2022 season?

It might help if I lay out some criteria for you, huh?

X-Factor players kick goals. They bob up, do the mercurial, and hit the scoreboard. To be classified an X-Factor player in this formula, you have to average one goal per game. Remember that – it’s important. But they are not just limited to creating for themselves, so when we crunch the numbers, we take the goals kicked and add in score involvements and goal assists.

Of course, there is more to being an x-factor player than just kicking snags, and defensive pressure is a good one to add to the mix. With that in mind, I added tackles inside 50 as one of the areas of assessment, and to round it out, working in favour of the bigger players, I added marks inside 50, as well. These stats were all weighted, as some are obviously more important than others – a goal is worth more than a goal assist. A goal assist is worth more than a regular old score involvement. Get the picture?

I could lay out the formula for you in detail, but screw it… I like a bit of intrigue.

Last season, I had a reader suggest including one-percenters into into the mix, however, when I applied that suggestion, it really caused the numbers to skew toward midfielders, so I have opted to leave that out. Same for inside 50s – this was designed to look at forwards of the non-key variety. If you’re a midfielder and you make this list, you are doing something very, very right in terms of your offence.

And before we get stuck into it… like a good Demtel salesman, I have more criteria, or in this case, a restriction… and this is a big one – no key forwards.

Sorry Buddy, you definitely have X-Factor, but you’ve also won Coleman Medals. You’re a key forward. Go home, polish those medals up, hide from the wife and kids in the toilet for a while like we all do, and be happy, mate.

So, equipped with that knowledge, who would you consider the best X-Factor players in the league in 2022? Let’s find out.

This content is a column for our Mongrel Members. This is the fourth of five – maybe six – members’ columns this week. Mongrel Members also get access to HB’s game reviews early. Wanna join them and support the best damn independent footy site you’ll find?