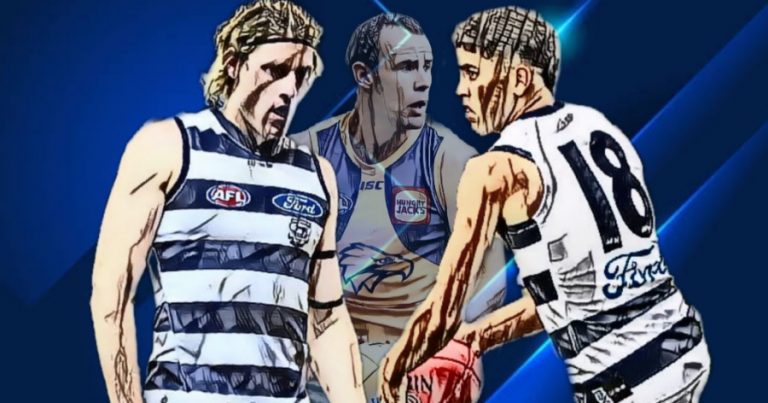 It was a tale of two very different seasons for these clubs coming into this match.

The Cats were top of the table and unable to lose this position. They had secured the minor premiership and merely awaited the formality of finding out who they would host in their first final.

Geelong has been playing the long game for some time now, strategically resting players each week as they build toward September.

The Eagles, meanwhile, have had a horror season. From losing swaths of players to Covid protocols, to then the usual attrition of an AFL season, they had been pushed further than any club in living memory with regard to having to reach for players to take the field (Yes, even more than the 2014 Bombers). Their own coach can attest to some of the farcical scenes of players arriving on gameday with name tags on.

There was also a third story to this match. A certain Patrick Dangerfield playing his 300th AFL game. Dangerfield has had a storied career across two clubs and has achieved almost everything in the game, with only a premiership really missing from his CV. Drafted while still in high school by the Adelaide Crows, Dangerfield made them wait before he could make a real start to his AFL career, but such was the Crows level of faith in his ability. And Dangerfield repaid that faith in spades as he became an absolute superstar for Adelaide, eventually winning their best and fairest in 2015 (his final year with them). “Danger” then joined the Cats in the 2016 season and led them to a preliminary final, and won the Brownlow medal, with the Cats having finished 10th in 2015. He would also be unlucky not to win another Brownlow in 2017, after averaging over 30 disposals and two goals per game during the home and away season, with a dubious suspension for a tackle on Carlton’s Mathew Kreuzer costing him his chance.

The Cats stamped their authority on this game early, and made it known that they were not about to flirt with their form on the eve of finals. Geelong punished the Eagles in all aspects, as they capitalised on costly turnovers and dominated the clearance game in the middle.

A couple of injury scares in the first half and sitting on a 10+ goal lead and Geelong somewhat put the cue in the rack in the second half. Some of their players tried to fill their boots on the scoreboard, while Patrick Dangerfield looked for a goal to cap his milestone, but just couldn’t find it.

Now Let’s get into the stuff that mattered….

I know, you didn’t think I was going to start here did you? You’re shocked, right? Right?…

I wanted to start here and acknowledge Cripps was also playing his 200th game for the West Coast Eagles and stood clear as their best player on the ground. It wasn’t huge numbers for Cripps but he took his opportunities when they presented and provided good pressure toward the Cats when the ball was inside his area. A lot of players around the AFL could take a leaf out of his set shot kicking in this game (even himself).

I was genuinely looking forward to the match-up of Hawkins and Barrass. Hawkins has been at the top of his game as a key forward for what seems like the last eight years and Barrass has announced himself as the Eagles’ best defender in 2022 and is this Mongrel’s tip for an All-Australian jacket as key position back, such has been his form. With Jeremy Cameron out due to a slight injury, it left Hawkins as the Cats’ key pillar and Barrass with only one match-up. Juicy.

Well, Hawkins came out and seemingly blew Barrass off the park. He finished with nine shots on goal with four goals and three behinds, as well as taking six marks inside fifty.

The points simply had to go to Hawkins. Credit is given to Barrass for not letting him have a career-best game, as I’m sure it must’ve felt like it was raining T.W. Sherrins at times, with how much footy the Cats were sending in Hawkins’s direction. Beaten, but by no means embarrassed or disgraced. Barrass also suffered from being the only player capable and willing to do the job, as when he tried to use teammates to assist in marking Hawkins, he got let down badly.

Joel Selwood enjoyed a vintage performance in possibly his last game at Kardinia Park. 28 disposals, five clearances and two goals will have the Geelong veteran feeling good about his football leading into a massive finals campaign. Selwood also notched up win number 200 with teammate Tom Hawkins (a ridiculous stat).

The ruck battle in this game was genuinely intriguing. The Eagles went with Bailey Williams, as they have for large parts of the last two seasons as Nic Naitanui has dealt with injuries, and Geelong was forced to turn to veteran recruit Jonathon with Rhys Stanley suffering an injury last week against the Suns. The tale of the tape read pretty good for both men, who probably walk away happy with their performance.

The Eagles young players may have been outclassed in this match, but they showed plenty in this game and throughout the year that should give Eagles fans hope for an improved 2023. Jamaine Jones, Williams, Rhett Bazzo, and Jai Culley all look to have the ability to make it as good players at the top level. I also believe Conor West, who is suspended, I think? Looks an absolute Jet. There is plenty there.

The milestone man perfectly encapsulated his career in the first contest as he got the ball and burst away on the wing. Only to blaze away with he ball and send it into the stands on the full. I much preferred his kick to mark Blicavs shortly after where he practically lasered the footy into his hands form 45 metres away. Its too late for Dangerfield to change, we must simply accept him as the enigmatic player he is.

As mentioned he didn’t get the goal he was looking for, but he had his chances. Particularly a prime one in the third quarter where he had an easy running shot, but fumbled the ball instead and lost possession. Just more perfect summations of the man.

Dangerfield also passed Josh Kennedy (Sydney Swans) for most contested possessions in history across a player’s career, in this game (*Since the statistic has been recorded).

The Eagles might need to re-think whatever system they have when they travel to Geelong, ever since that famous come-from-behind win in 2006, led by Ben Cousins, where they overcame a 54-point margin, they have had a horrid time at the venue. They have played Geelong eight times there since and lost by an average margin of 70 points! And that’s not even including the 92-point thrashing the Sydney Swans gave them there during the Covid schedule of 2021.

Yes, Geelong have been a consistently good side during that time, but this has included two cycles of the Eagles, where they have bottomed out and then made it to a grand final or won the premiership, and they still have an abysmal record.

Pretty obvious I’m a Cats fan by this point and the one thing I wanted out of this match was no bloody injuries! Sure enough, Kolodjashnij gets knocked out and Cam Guthrie hurts his shoulder. Get stuffed!

Have to put myself in this category. Watching the first half with my only eye, I felt the Cats had copped a raw deal from the men in fluro green and shared my thought with my fellow Mongrel Punt writers. This only exposed me to ridicule as some very dubious decisions in the second half directly led to some Cats’ goals, ala watching Stengle run 30-metres into goal and taking over 20 steps without calling running-too-far. Especially after calling it for Junior Rioli in the first quarter even though he took a bloody bounce!

There will also be plenty of discussion around the Cats team selection in the upcoming two weeks, as there are plenty of players looking to get back into this side, namely Jeremy Cameron, Rhys Stanley, Mitch Duncan and Sam Menegola. I’m Sure Cam Guthrie and Jake Kolodjashnij won’t be looking to step out with their injuries and Tom Atkins will not bee keen to remain the substitute either. There is simply too many players and not enough positions and there are going to be some seriously unlucky players.

The Eagles can finally put this tumultuous year behind them. They had some low points, but they also had some high points. They got to celebrate the career of Josh Kennedy and unearthed some bloody beautiful diamonds in all the rough they copped.

Who knows, could we see a snapback akin to 2012 next year? They will get a much more favourable draw due to their winning position. Will collect a budding young talent with the number two draft pick, and hopefully be able to utilise the summer to get some of their more senior players right for one more big campaign.