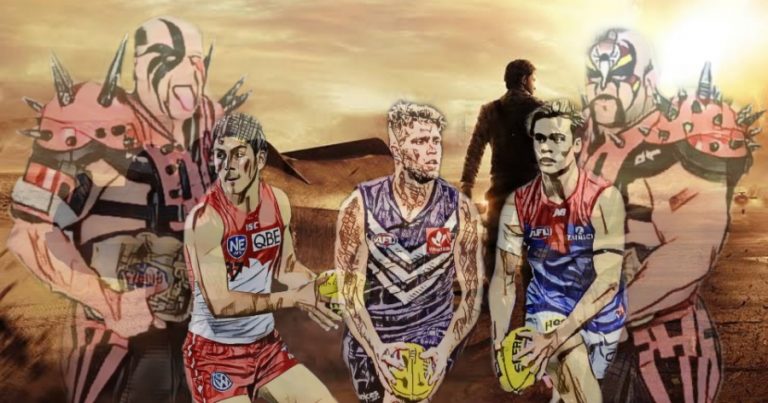 The Road Warrior Ladder – Round 21

With just two rounds of the 2022 AFL season remaining, we’ve come down to a fight between three teams to be crowned the best road team in the AFL.

The Dockers sit at the top of the tree, notching an impressive sixth interstate win of the season (and a draw) as they knocked over the Dogs.

The Dees are in hot pursuit, a game behind with just one road game to play.

And the Swans have surged into contention, with a road game of their own to play out, yet.

It’s going to be tight.

THE ROAD WARRIOR LADDER AFTER ROUND 21

Freo sit a game clear. They have one road game remaining in Round 23, when they head to Canberra to face the Giants. If they win, it’s over.

Melbourne also have one last stand, against the Lions at the Gabba in what should be a belter irrespective of whether you give a rat’s backside about the Road Warrior Ladder, or not.

And Sydney face the St Kilda in the final game of the season at Marvel.

The Dockers will have the chance to put this away – all they have to do is beat the Giants for their seventh interstate win of the season and they’ll be 2022 champs, however, the Dees have a huge point differential, so if the Dockers slip up, Melbourne can overtake them with a win over the Lions.

As for Sydney, they also have a better point differential than Freo, so the door remains open for them, as well.

GWS tangle with their old mates, the Western Bulldogs, also at Marvel

GEELONG head to Queensland to take on The Suns

And PORT ADELAIDE head to Marvel to take on the Bombers

No two-point games this week.

Wrestling note of the week – Ric Flair wrestled his last match (apparently) over the last week, with the Nature Boy seemingly unable to stay away from the life that gave him so much, and took away plenty in the process. Possibly more than his many ex-wives.

Now 73, Flair suffered a huge heart attack about four or five years ago and was close to death, but credit where it’s due – he has battled back to be in pretty good shape for an old fella.

Flair will be remembered as the stylin’,  profilin’, kiss-stealing, wheeling, dealing, jet-flying, limousine-riding son of a gun, but I sincerely hope this is genuinely the last time we see him in the ring. Wrestling luminaries such as Undertaker, Bret Hart, and Mick Foley all showed up to the Nashville event to witness the match in which Slick Ric finally said goodbye.