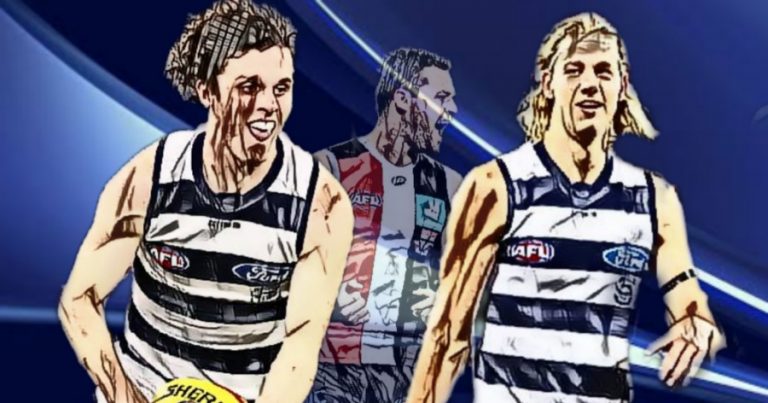 The Cats came into this game following a commanding victory over the Western Bulldogs last week. This week they would complete their home stand against the Saints, who are in the same situation as the Bulldogs and fighting for a place in the top eight.

The Saints steadied their ship last week and claimed the eighth position, for the time being, with a win against Hawthorn that would’ve had Saints fans very nervous at times.

Chris Scott may have been back to his scheming best as Geelong made a raft of late changes to their side and then named their second ruck in Ceglar as their medical substitute.

These games must have worked in some way as the Cats took control of the opening quarter and skipped out to a commanding lead. The Saints just couldn’t get their hands on the footy with any sort of effectiveness, which was wonderfully noted by assistant coach Corey Enright at quarter time.

Now, it’s one thing to know when something is wrong, and another to correctly identify it, but then the Saints completely rectified this issue in the second quarter, as they reversed roles and made Geelong defend for effectively the entire quarter. They did not quite get to the point of retaking the lead, which they briefly held after kicking the first goal of the game, but they did bring it back to single digits before a late Cats goal.

The second half of this game was not a repeat, but a variant of the previous week down at Kardinia Park. Geelong kicked into gear and dominated the game. They kicked four goals to nil in the third quarter and then the first four goals of the last quarter before the Saints finally registered another goal, just measly 52 points down.

And Saints Fans, you can stop reading as you’re not getting much of a mention from here on out.

Now Let’s Get into The Stuff that mattered…

People have a lot of opinions about where Geelong’s biggest strengths are and what the biggest change in their game style is in 2022 compared to previous iterations. I have two names for you. Isaac Smith and Max Holmes. The Cats own Maverick and Rooster. They are the change. Smith established himself in the team last year after his move from Hawthorn and Max seems to have entered himself into the school of being the ultimate wingman under Smith’s tutelage.

Together they form the running machine that propels the Cats forward at record speeds. But they’re not just great runners, both of them hit the scoreboard, they both get back in defence in support and they are both particularly good marks.

One major deficiency of the Cats over recent seasons (outside of 2020 where Sam Menegola had an amazing year but he also isn’t quite the same as other wingmen) and big finals has been the missing piece of attacking weaponry on the outside. The running machine that will carry the can when the games get tight and they now have two of those. You only have to look at other top teams in the competitions and see the ilk of players running in these positions. Ed Langdon, Josh Daicos & Steele Sidebottom, Bailey Smith, Blake Acres etc.

And on the back of this fact, Chris Scott has decided he might as well ensure the team plays in a manner that compliments this newfound strength. Yes, a strength in a specialist position that isn’t even genuinely recognised in the All-Australian team each year, as it is stuffed with midfielders found inside the centre square year after year.

Smith and Holmes finished the clear one and two ranked players on the ground in the match and had the biggest influence on its outcome.

Playing in his 150th game for Geelong, Kolodjashnij was very prominent in defence. With Tom Stewart having an unusually quiet game and Jack Henry playing up the ground it meant other defenders for the Cats had to step up. “Kolo” was one of the defenders who did. Sometimes maligned for his inability to win the ball back in one-on-ones and also for his foot skills, Kolodjashnij is a good lockdown defender without offering anything spectacular. However, it seems that with the upcoming crunch of players and positions everyone has been put on notice in this Cats team and Kolodjashnij looked more like Tom Stewart in this game than Tom Stewart did, at times.

I’ve said this before when I’ve covered Saints games this year, but Mason Wood looks to have really turned a corner this year. Often maligned at his previous club, Wood seems to have found his place on the wing at the Saints. He just looks like he thinks he belongs at the level, and I’m not sure this is a reflection of the Saints’ development, or if the penny finally dropped for him. He’s cleaner above his head, he’s harder at the footy. He’s smarter around the ground. He even uses the footy better.  I would argue he was one of only three saints that could’ve been considered for votes in this match, as Wood battled manfully against the onslaught from the Cats’ wingmen.

Steele’s second quarter is worthy of recognition, alone. Not huge by numbers, but huge by impact. With the Cats 22 points in front at quarter time, the Saints needed someone to step up and inspire them to rally. Enter Jack Steele with some big hits, crunching tackles and just bloody good football as he kicked a goal and asked his teammates to come with him and reel the Cats in. It didn’t end up working out that way as the Cats’ effort and class were simply too much.

De Koning added another notch to his belt in this game in the form of Max King. De Koning did not let King breathe without checking if his breath was fresh, such was his dedication to manning the Saints’ spearhead. The tale of the tape between the two finished like this: King had eight disposals, two marks (one contested), one goal and one goal assist. De Koning finished with 11 disposals, eight intercepts, four marks of his own, and eight spoils. I’m giving these points clearly to De Koning.

This now leaves the tally between the two men at 2-0 to De Koning, and at 21 and 22 years of age respectively, I am looking forward to another decade of match-ups between these two stars.

I know it didn’t work well for the Crows, but surely the Saints look at reuniting the Crouch brothers next season. Brad again played his role through the middle and finished with solid numbers. 28 disposals and 11 tackles as he battled away in the crunches of the midfield against the Cats.

The whipping boy for so long of the Geelong faithful has stamped his place in this Geelong side. “Zuthrie” has developed his game and now looks like a key cog in this Geelong defensive set-up. The key moment I want to highlight was in the last quarter. No, not his great mark and goal. Before that, wind it back just a bit more. Zach was caught out one on one in defensive fifty against Rowan Marshall. A recipe for disaster in years gone by.

Zuthrie stayed right with Marshall and then attacked the footy on its merits as soon as it was in the air and left him behind in the dust. It was the mark of a player who has developed the confidence to simply play the ball and not worry bout his opponent after a certain point. It’s a trait the best defenders develop.

It was pointed out that Hannebery has now missed almost three times as many games in his four years at the Saints than he did at the Swans. Hannebery was remarkably durable at Sydney, when, not including his first year of footy, he averaged 22 matches per year, however at St. Kilda that average drops to just four. Injuries suck. And when you look at a player like Hannebery and his big ticket move to St. Kilda, it’s just not fair that a player so durable broke down so spectacularly.

Interesting way to draw a 50 metre penalty. Butler held the footy out in front of himself faking a handpass after receiving a free kick. Rhys Stanley was on the mark and duly reacted and knocked the ball out of Butler’s hands like he was holding a paintbrush, and the umpire obliged with a 50 metre penalty that the home crowd did not agree with (to put it politely). It was very clever.

Chris Scott must love having a player so desperate to hold his spot in this team. His pressure and efforts were relentless in this game. Parfitt may ultimately get squeezed out in the crunch, but maybe not if he continues to play as he did against the Saints.

Luke Dahlhaus also did himself no harm with his efforts, but he likely knows it will take players being out for him to be in the side

An interesting return from Rhys Stanley. Supposedly out for up to a month, which meant the Cats named Jonathon Ceglar in the game against the Bulldogs. Then a miracle recovery by Stanley and he comes straight back in to remind the fans and coaching staff that he has toiled away for eight years to be the Cats’ number one ruckman and he is not about to let that slip on the eve of a finals series.

The Cats bank their 11th win in a row and cement themselves a double chance and seemingly inevitable top two finish. As previously mentioned there is currently a shortage of playing positions for players in the Cats side so Chris Scott will want to start stabilising what he believes to be his best line-up in the last couple of matches before finals.

The Cats no make the trip up to the Gold Coast to play the Suns before a final home match against the Eagles to cap off their home and away season.

The Saints now find themselves ninth and will need other teams to lose a game or two across the final two rounds and also must win both of their remaining games against the Brisbane Lions next Friday night and the Sydney Swans the following Sunday. They can at least be glad that both of those games are under the roof at Marvel Stadium to allow their fans to try and cheer them to victory. Ultimately, it is looking like another season that may get away from this Saints team.