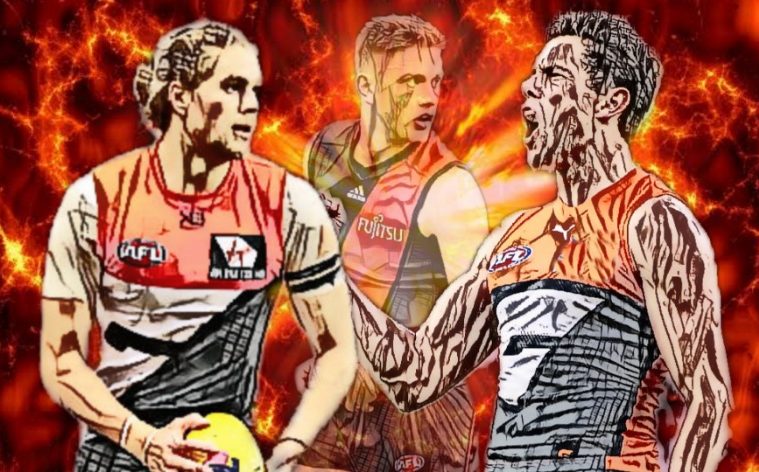 Superstar midfielders returned for both sides as the Bombers looked to continue their late-season form line as they headed to GIANTS Stadium to take on, you guessed it, the Giants.

This week has been about the Giants – their pursuit of Clarko, the spray they copped from Mark McVeigh, and the murmurings of a potential off-season player exodus. The Bombers did what they needed to against North Melbourne last week and would have been eyeing off another four points. Could the Giants find another gear and a response from last week? Or would the Bombers blow the orange tsunami off the park? Let’s find out what mattered!

On Fox Footy pre-game, Mark McVeigh was interviewed about what he wanted to see today from his side. He spoke about effort, and connection across the field. He spoke to connection moving forward and for his defensive unit. The game took an interesting cycle for much of the contest. In the first half, the Giants jumped the Bombers to start both quarters, but the Bombers finished both stronger. In the third, this was reversed. And in the final term, well, the Giants blew the Bombers off the park … the men from Windy Hill Tullamarine faded with a mere whimper in the final quarter.

While the game was not pretty for the majority of the afternoon, the Giants had things on their terms for longer periods than the Bombers. And of their connection … well, while it wasn’t successful all day, there were some significant moments of brilliance from the Giants. Whether it be at the contest, or their transition at speed, it was good to see the Giants take some risks. Lachie Whitfield was one of the key proponents of this as he found some run and some form that we are accustomed to from the Giants Rolls Royce.

Much has been made of the post-game comments from caretaker coach Mark McVeigh after the Giants were eviscerated by the Swans last week. The Giants coach spoke of the embarrassment of the game and his team being “checked out”. Today, things were vastly different. Even before the first bounce, you could see that the Giants were up for the fight, getting in the face of their opponents. In the first quarter alone, the Giants were +11 for tackles, +4 for clearances, and +3 for inside 50’s. They were on top in key metrics and it was only a strong finish to the quarter that brought these stats into great parity.

The middle two quarters were more balanced, until the Giants finished the job in the last. One of the key weapons that the Bombers possess is their small, running defenders and how they impact the contest. The Giants had 16 forward 50 tackles for the game, making sure that the Dons couldn’t run in waves. Their pressure, and willingness to do whatever it took for their mates was telling. Having 14 more one-percenters (40-26) and winning the previous stat by 15, emphasises the mindset that the Giants had today.

Where the Game Was Won

I put this simply on the shoulders of those who reside in positions of leadership. At the beginning of the game, when there was heat in the contest, the Giants’ leaders were front and centre, involved in everything. Coniglio, their captain for the day and Josh Kelly were at the heart of this. The Bombers on the other hand, well, it was their younger players were tackling, harassing, and applying pressure. The lack of impact from their leaders was highlighted at a stoppage. Josh Kelly approached the contest at speed, won the footy and scored a goal. The pressure applied? A one-armed, half-hearted tackle attempt from Bombers skipper Dyson Heppell. This isn’t to pot Heppell, but to show the difference in intent and impact from the competing clubs’ leaders.

Leaders can positively and negatively impact a club. Today, it was the Giants leaders who did the most damage. They rose to the challenge from their coach and were full throttle from the start. The Bombers’ defenders competed hard, and there were patches were they had some control, but in terms of the overall effectiveness, it was the leaders of the Giants who got the job done and this carried significant weight for the result of the match.

What About the Bombers?

This was one of the more disappointing performances from the Bombers in 2022. They were beaten in most statistics and their key players had minimal impact. That said, Darcy Parish competed and won a team-high 28 possessions. Sam Durham ran all day and buzzed around at the feet of contests, finishing with 23 disposals of his own. And while Toby Greene finished with 2.2 from 14 touches, Jayden Laverde competed well all day.

We have seen some incredible feats from this Bombers side and we know how quickly they can score. Today was one of those days where they were wasteful, didn’t take their opportunities and were outplayed by their opponents.

I think a good gauge as to how successful they will be is their effort which was down for most of today. The Bombers were at their match best through the second and early in the third quarter. They got some link-up play going, upped their pressure, and turned the game into a genuine contest. They have the bones of a good side, but lack some quality leaders who will put the team on their back and set the tone. When the game was on the line today, their leaders were down. Hopefully, Adrian Dodoro and Ben Rutten can work some magic in getting some more established support to their young players and bring out the best in their senior core.

The game was frenetic to begin with. A minor melee, Coniglio goaling within the first minute, and then a free kick to the Giants before the next bounce. It was silly from Stringer, but Himmelberg also went down pretty easily. Our game is combative and physical. A little push and shove isn’t the end of the world. Maybe the umpires should have a look at the way the Ginnivan/Salem encounters were handled the night before?

A shout out to Matt Guelfi. The peroxide Bomber may have only had nine disposals, but he kept them in the game for extended periods, finishing with a career-high four goals in today’s outing.

Nick Haynes and Harry Himmelberg are great aerialists. However, in a moment late in the second quarter, they were outpointed by the younger and smaller Archie Perkins deep inside the Bombers’ 50. Perkins took a stellar contested mark and converted his set shot.

Sam Taylor again belied his size on numerous occasions. I’ve spoken previously of his aerial work – to spoil and intercept. Today, he competed wholeheartedly at ground level as well, laying a number of crucial tackles when his side needed them.

Jesse Hogan was great today. His forward pressure, marking, and efficiency were all on display. And when the game needed someone to stand up early in the final term, Hogan was the man to do so, finishing with 4.2 and 12 marks.

That’s all for today. The Giants responded and the Bombers will lick their wounds. Both teams can’t make finals, but they can impact the finals sides in the last few weeks. The Giants travel south next Saturday in the early slot and face the Dogs at (Avengers) Marvel Stadium, while the Bombers host the Power late on Sunday arvo at the same venue.