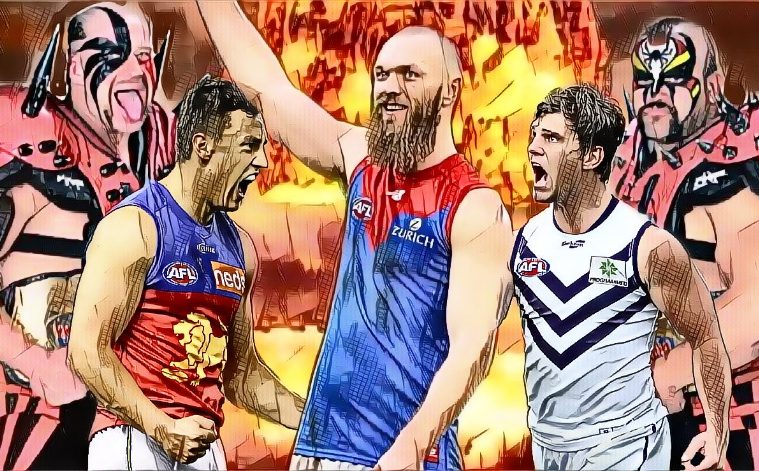 The Road Warrior Ladder – Round 20

The chance was there to snuff out the Dees’ chances at Optus Stadium on Friday night. In doing so, the Dockers could have had one hand on the Road Warrior Championship of 2022.

But Melbourne are not to be toyed with. In a brilliant display, the Dees snatched back the lead this week and may be on course to be crowned the best road team in the game for 2022.

THE ROAD WARRIOR LADDER AFTER ROUND 20

What a week for choking! It was like Joe Ganino was making a webcam video by himself!

Not only did the Dockers capitulate to the Dees on Friday night, we had the Lions stopping to a walk and being rolled by the Tigers at the MCG.

This was a prime opportunity for the Lions to not only cement their place in the top four, but to snatch the lead in the Mongrel’s Road Warrior Ladder. If you watched that game, seeing the Lions 42-points ahead, you had to think that they were going to cruise home. However, the Tigers rallied and hit the lead late in the last quarter and Brisbane had nothing left to give.

Amazingly, despite eight games having points for the taking this week, only Melbourne improved their place, leaping back to the top of the table. Every other game went to the team with the home-ground advantage.

Don’t tell me playing at home doesn’t mean something – it is why so many Non-Victorian supporters get pissed when teams play away games at their own home ground.

GOLD COAST head down to Launceston to face the Hawks in what could surprisingly be a very hotly contested game.

ESSENDON look set to capitalise on GWS at Giants Stadium, particularly given Mark McVeigh stated his team had checked out

SYDNEY are in a great position to strike, taking on North Melbourne at Marvel

CARLTON hit the road to face Brisbane on the rebound

And ADELAIDE head west to face the Eagles at Optus Stadium

The only game with no points up for grabs sees the Magpies and Dees tangle at the MCG.

Wrestling note of the week – Summerslam was this weekend, with Roman Reigns again triumphing over Brock Lesnar, despite Lesnar using some sort of farming machinery to list and ruin the ring. I kid you not…

Best Summerslam of all time? Some are calling this one the best they’ve seen, but I am more old school and prefer the 89 and 90 versions that saw the Brainbusters v Hart Foundation, Rick Rude v Ultimate Warrior x2, and Demolition v The Hart Foundation.

But I am pretty old.

This year’s event marks the first since Vince McMahon stepped down as the boss and moved on into retirement after shelling out vast amounts of coin to keep women quiet about the nature of his relationship with them. Whilst the overall reports about the event have been positive, I have to ask one question about Vince now that he is done.

Was anyone really surprised that he paid hush money to women over the years? I am sure plenty in the business world were, but to anyone who has watched wrestling for the past however-long, the answer would be a resounding no.

Now, they just need the alleged assault of Rita Chatterton in the late 80s to hit the headlines again, and Vince will be completely cooked. Pity she signed a non-disclosure agreement.