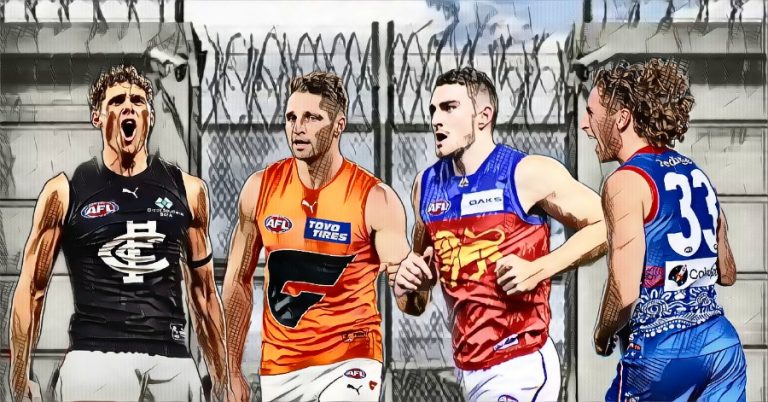 As a Lion continues to increase his worth for 2023, a Giant retains top position, and a pair of Blues press for the top, as well.

There are 11 players in contention with five weeks remaining. Who will be the man to drag down the most GooJ marks in the game in 2022?

You may have heard Wayne Carey commentating at times, jumping on board and telling everyone who’d listen that this is the most important mark in the modern game, yet we’re the only ones charting it. It’s nice to be ahead of the game.

Here are the players that took the big “GooJ” marks in Round 18, and our overall leaderboard.

Paywall… what a pain, right? Well, it is how we survive and keep the page clean of gambling ads. Yeah, that’s right – we don’t just talk about how bad they are, we just don’t accept their coin. This article is the fourth of five – maybe six members’ articles this week. You can access this, additional exclusive columns, and get the game reviews from HB earlier than everyone else by becoming a Mongrel Member. Plus, you help us grow.

Full list of multiple GooJ markers for Round 18 as follows

Dan McStay made his move this week.

After missing three weeks earlier in the season, his chances of winning the GooJ mark award this season looked to be shot, but he has bounced back well, and with another three this week to lead all players, is within striking distance of taking back the lead injury took from him.

Bont was huge against the Saints, using his great hands to outreach the one-speed, and seemingly one-size St Kilda midfield. He hasn’t been at his best this season, but there have been enough glimpses that if the Dogs get a bit of a run-on, what he can provide is basically something no other midfielder can.

Riley Thilthorpe continued to show signs playing as the third forward, which is exactly where he needs to be at the moment. People may have questioned the Crows supporting and retaining Taylor Walker after last season, but the heat he draws allows Thilthorpe to play on inferior defenders until he develops, and Walker deserves a heap of credit for that.

Jack Darling is an interesting one – gets in the vicinity of a GooJ mark often, but takes maybe one on five of the opportunities he has. There can be no doubt he is powerful, but he reminds me a bit of a bloke named Kelvin Templeton I watched when I was a kid. He was a star for the Dogs, but put on a bit too much muscle, particularly in the beach weight department, and when he’d cop of a knock, it was as though he would take an extra step or two to regain the correct trajectory. Anyway, long story short, I see a bit of that in Darling now. Back in 2018, it seemed as though he had the perfect playing weight. Irrespective of what the scales state, I reckon he is a little too bulky at the moment.

Body shaming aside… interesting to hear the chatter around Mark Blicavs and the AA team at the moment. Sure, it is coming from Patrick Dangerfield, who is basically cheerleading, but Blicavs, a two-time Carji Greeves Medallist, has had another excellent season and he does just about everything for the Cats. His two GooJ grabs this week move him to 13 for the season, which is a great number for a bloke who plays wing half the time.

OVERALL STANDINGS AFTER ROUND 18

Last week I guessed that Daniel McStay may be the one to take this all out, and he responded with a leap up the ladder to sit one behind the overall leader, who was no slouch, himself.

He took three powerful grabs on what is fast-becoming his customary long leads up the wing to draw within one of the Hulkster, Jesse Hogan.

I have to admit, Hogan has surprised me greatly this season, as well. I had pictured him more as a stay-at-home forward coming into 2022, thinking his big tank may have been somewhat diminished, but his work to give his team an outlet this season has been first-rate. I reckon he is one preseason away from really giving the Giants a top-five season in the race for the Coleman.

It was a week where Max Gawn had his colours lowered by a smaller, but determined combination of Jeremy Finlayson and Charlie Dixon, dragging down just one GooJ mark for the round.

With five rounds to go, one big week could swing this whole thing. Four GooJ marks remain the most we’ve seen in a single game this season. If one of the leaders could pull out even just one of those games in the next couple of weeks, it could be enough to carry them home.

Speaking of record GooJ games, for this off-season, I have set myself a little bit of homework in relation to all-time records and will peruse some previous games where players took a heap of big marks. Wayne Carey’s ten contested mark game, and Aaron Naughton’s nine contested grab game are at the top of the list, as will be a game or two of Nick Riewoldt at his best.

Keep your eyes peeled for them.

Also, I haven’t spoken about it since around R8, but I now have tackling and holding the ball data stretching from Round Five to Round 18. Another article around the best and most effective tacklers in the game will be incoming soon.

As always, massive thanks for your support. Without you, there is no us.