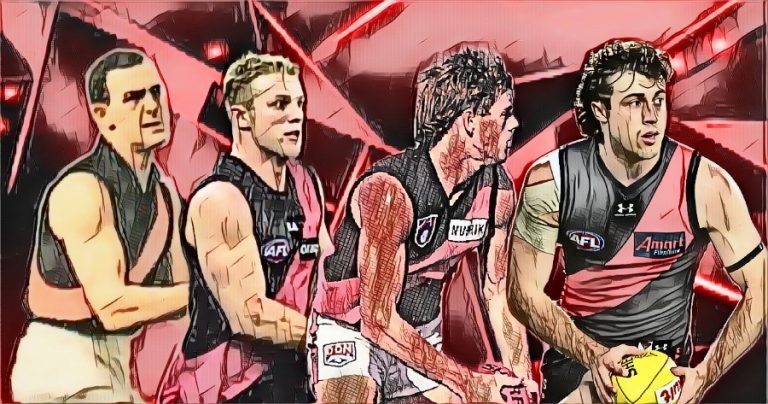 Essendon By The Numbers – Number One

There are two distinguishing features that identify an AFL player when they take the field:

In years gone by, these pigments were dyed into the wool and emblazoned across the chest of a player with the utmost pride, representing the football club which those colours symbolise. Today, those same colours are sublimated into the modern polyesters that make up a scientifically designed uniform that is specifically created and tailored to achieve optimum comfort, aerodynamics, breathability and numerous other key factors.

Whilst an argument can be fairly mounted that the sentimentality behind wearing your club’s colours has long dwindled in comparison to yesteryear, there is no question that in a generation where various media rule over our existence, a club’s colours are more a part of their individual identity and branding today as they have ever been.

Whilst the colours signify which team a player represents and quite often symbolise a core part of that club’s history, it’s the numbers across a player’s back that identify them as an individual. Even though Australian Rules is a team sport by every definition of the term, there always has and always will be an individual element to the sport. Some numbers are held in high esteem for clubs due to who has worn them in the past, some clubs have dedicated numbers for specific types of players, or positions within the club’s leadership group. Although the colours make you the player that you are for that particular team, your number is what makes you who you are as an individual within that team.

Funnily enough, having numbers on guernseys was opposed by many within the sport for a number of years. The only time jumper numbers were ever widely accepted was when an interstate side toured for a sports carnival or promotion.

In fact, it wasn’t until 1903 in a promotional match held in Sydney that Fitzroy and Collingwood would become the first side to have numbers allocated to each player in a game for premiership points. The League distributed cards to all 18,000 mostly first-time spectators with the rules of the game and numbers to help identify players.

In what was initially a financial decision, two sporting goods companies that provided the guernseys to clubs decided that wearing a small number on each player’s breast would aid spectators in identifying lesser-known players, and also aid the coffers of the football clubs that could then sell a program at the gates with each player’s numbers for fans to identify.

After some trial and error, the idea was met with a generally negative response from fans being unable to read the small numbers on the jumpers’ fronts, the decision to try larger numbers across the player’s backs was made and well received. It wouldn’t be until the 1912 season that the VFL would mandate numbers on players’ backs and assign regulation sizes and colours, after much reluctance from clubs in seasons prior.

With that being said, the Essendon Football Club is an old team with a rich, proud history spanning back into the 1870s. They are one of the most successful and well-known sporting clubs in Australia and over the years have fielded some of the greatest players to have ever played the game. In this series, I will look at each individual guernsey number within the club and profile some of the best players to have represented the club whilst wearing it.

Bio – Taken as Essendon’s first ever number #1 draft pick at the 2016 National Draft, McGrath came highly touted as a versatile midfielder that had genuine, powerful leg speed and an ability to read the play well and sidestep through traffic. Initially taken with the plan to play in the midfield, McGrath has spent a lot of time being moved around in various positions through the midfield and behind the ball as a half-back utility. He also won the Rising Star award in 2017.

Bio – Jack’s father Tom Clarke played 103 games on the wing for Essendon between 1937-1934, curated the grounds at Windy Hill and was the club’s Vice President for 13 years throughout the ’60s and ’70s. His brother Ron Clarke was an Australian athletics champion that set 17 world records and represented his country for many years. So to say that Jack came from good, athletic stock is an understatement. Making his debut in 1951 on his 18th birthday, Clarke is best remembered by his peers as a prodigiously talented centreman with one of, if not the smartest football brain of all time. The sort of athlete that would have excelled no matter which sport he had decided to play. He was named in the inaugural All Australian team in 1953, then again in both ’56 and ’58, and represented Victoria an unprecedented 27 times throughout his career. Clarke won two Crichton Medals for the Best & Fairest at Essendon and was runner-up on six occasions. He played in a total of five Grand Finals for two premiership wins, one as captain in 1962. Upon retirement at the end of 1967, Clarke took the reins as coach from the legendary John Coleman and made an unsuccessful Grand Final in his first season.

Jack was an inaugural member of the AFL Hall of Fame in 1996, is named as centre in Essendon’s team of the century and was ranked #8 of 25 in Essendon’s Champions of Essendon list.

Bio – Mark Harvey was a lucky benefactor of walking into the right club at the right time, playing in successful back-to-back Grand Finals in his first two seasons (1984+’85). He began his career as a tough, unassuming forward with a sublime skillset, but thanks to a series of injuries that plagued his career, Harvey would be transitioned to centre half back, a position that commanded a lot less of a toll on his body, thus extending his playing career. It would be his hard edge, ability to read the ball and skilful kick that set him apart, making the All-Australian team and winning the club’s goal-kicking award in their ’85 premiership season. Harvey would win the Crichton Medal for the club’s Best & Fairest in 1992 and also play in the club’s 1993 premiership, earning another All Australian honour that season. Retiring at the end of the 1997 season, Mark transitioned into an assistant coaching role at Essendon until 2006 when he would join Fremantle as an assistant and eventually coach the Dockers from 2007-2011 and fill in as caretaker coach for the Brisbane Lions after Michael Voss’ sacking. From 2014-2020 he returned to Essendon as an assistant coach once again, and still works at the club now in an administrative/statistics role that involves recruiting and opposition analysis. Mark Harvey is ranked #18 of 25 on Essendon’s Champions of Essendon list.

Bio – Keith Forbes was described as being insanely quick, impossible to tackle and deadly when around goal. Credited as being the original prototype for a crafty small forward, Forbes played predominantly as a goal-kicking rover. His average of over 2.7 goals per game whilst at Essendon rates him inside the top three scoring rovers to ever play the game. In nine of his ten seasons at Windy Hill, he either won or came runners-up in the club’s goal-kicking award, the other year was his first season where he missed five games and still finished third. He was the first Essendon player to ever reach 200, 300 and 400 career goals and played interstate representative football in six of his seasons. Forbes won the Crichton Medal for the club’s Best & Fairest twice and was runner-up on a further two occasions. He also came runner-up in the Brownlow Medal twice, and captained the club for three seasons. He would play two seasons at North Melbourne and one at Fitzroy after leaving the Bombers and also served in WWII. Forbes is a member of the Essendon Team of the Century, the Essendon Hall of Fame and ranked #16 in Essendon’s Champions of Essendon list.

Bio – Sydney Barker was well known around Victoria as a determined and imposing ruckman by the time he came to Essendon. Having already played Association football for 15 years, it was through controversy that he ended up at the club. During that time North Melbourne (whom he played for) were a part of the VFA and had failed in their previous attempts to be admitted into the VFL. Most of the North Melbourne players had a handshake agreement to play for Essendon in 1921 because North Melbourne (VFA) were going to fold, and eventually disbanded as a club to merge with Essendon (VFL) as the only way for them to join the VFL. The State Government blocked the merger and denied the club clearance, meaning that all North Melbourne players that had already crossed over to the VFL were suspended from the VFA for two years for crossing without a clearance. Barker became captain-coach of Essendon in 1922 and quickly transformed them into a side hungry for success, guiding them to premierships in 1923 and ’24 before retiring at age 36. He was a fireman for 23 years and died whilst working at the fire station in 1930. The North Melbourne Best & Fairest Award is named the Syd Barker Medal.

Bio – Merv Neagle was a tough and fiery wingman who, along with his genuine pace, possessed the rare ability of being able to back up his combative temperament with great football skills. He was creative by foot and had the strength to be able to play on-ball when occasionally required. Merv played in the losing Grand Final side of 1983 and the victorious premiership side of 1984. He would miss the 1985 Grand Final as a last minute exclusion thanks to a leg injury. Merv finished runner-up in the Crichton Medal for Essendon’s Best & Fairest twice, and also runner-up in the Brownlow Medal of 1980. He grew up in Dimboola, best friends with fellow Essendon legend Tim Watson. At the end of the 1985 season, Neagle was one of many high-profile recruits that were recruited by the newly formed Sydney Swans. He would play in Sydney for a further five seasons before retiring at the end of the 1990 season.

Merv’s son Jay Neagle was recruited by Essendon as a Father/Son draft selection and went on to play 28 games, kicking 42 goals as a full forward. Merv was tragically killed in a trucking accident whilst working in 2012.

Bio – Allan Belcher spent one season at Collingwood before making his way to Essendon. It took little for the billing ruckman to stamp his authority on his new club, renowned for his leadership skills and general strength as a large man. Belcher was well respected on and off the field and admirer by his fans so much so that he was given the nickname “King Belcher” within the Leave, he was made captain of the club in 1910, then again in 1912 when he would lead Essendon to a premiership victory over a South Melbourne side, who’s ruckman happened to be his own brother Vic Belcher. Two brothers playing off in a Grand Final wouldn’t be seen again for 112 years until the Hill brothers (Brad and Stephen) would play against each other for Hawthorn and Fremantle in the 2013 Grand Final. Allan captained the club through to 1915, then again after the war in 1919.

Bio – Mark Johnson was a tough and unassuming utility used at either end of the ground, but more favourably as a back pocket enforcer. Often underestimated by his opponents, Johnson was solid and knew how to lay a player out, fairly back then, with a bump as well as anyone. Recruited in 1999, Mark would play in the 2000 Grand Final domination of Melbourne and won the Crichton Medal for the club’s Best & Fairest in 2002. He would inevitably finish out his career at Fremantle, suffering a shoulder injury that ended his career shortly after reaching the 200-game milestone.

*All stats, figures and rallies relevant to the player’s time at Essendon only, unless otherwise stated.