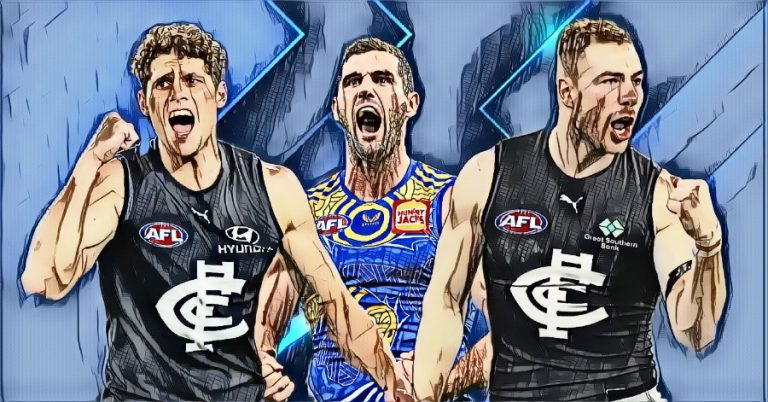 The Blues travelled across the Nullarbor to take on the resurgent Eagles. Much was on the line for the Blues as they tried keep in touch with the top four, or fall into the lower rungs of the top 8, depending on results to keep them secure. The Eagles, with again key players unavailable, were playing for pride and momentum. Could they jump the Blues on their home deck or would the Blues flex their football muscle and join the Pies & Lions at equal 4th on points, just missing on percentage? On a sunny Perth day, here’s what happened.

There were clear contrasts in style for this one. The Blues were slick and able to find their forwards in space in the first quarter. The game was all played in Carlton’s forward half. With a 24-2 inside 50 count for the first quarter alone, the tempo was set. This was best encapsulated by Harry McKay laying a run-down tackle in the centre of the ground on Shannon Hurn. The Blues were giving the Eagles nothing. When your key forwards are running down players, you know you’re playing well.

The second quarter flipped everything on its head. The Eagles started to find dominance around stoppages and this translated to the scoreboard. While Carlton still had field position dominance for much of the quarter, the Eagles came roaring back into the contest after a scoreless first term. They had 17 inside 50s for 7.3 on the scoreboard to 12 entries for 3.3 for the Blues. The Eagles scored 5.1 from stoppage alone.

The third quarter saw the Eagles start to take on the corridor, they just lacked polish with their forward 50 entries. One of the downsides to their ball movement for much of the game was they weren’t taking those risks … perhaps it’s a lack of confidence in finding targets or a want to try and not be opened up defensively. When they did pull it off, the Eagles put significant pressure on the Blues’ defence.

The final quarter was all Carlton. Once they broke the resolve of the Eagles, they were able to capitalise on their field position and move the ball with ease. The Blues kicked 7.4 to no score for the final term, taking a 17-point lead at the last change and turning it into a 63-point loss for the Eagles.

An Eye to the Future

The struggles that the Eagles have faced in 2022 have been well documented. The silver lining to this, however, is seeing young players step up. Rhett Bazzo may have only had 8 touches, but he had some good moments – he competes, or at the very least, gets to competitive spots. Long term, he is a very sound key position prospect. Brady Hough showed his courage as he beelined the ball and got decimated by his own teammate. Seeing him get out and continue the game shows the measure of the man. And while Charlie Curnow kicked 5.3, Harry Edwards had some moments – highlighted by a great one-handed contested mark as he outpointed Curnow with his positioning.

There are others that we can reflect on, but these are three who gave their all and made sure to leave nothing out on the ground.

From Round One through Ten, the Blues were ranked number five in points for.

Since then, they’ve been fourteenth.

The big two for the Blues have stuttered a little recently; moreso Harry than Charlie. However, the Blues have found ways to win in some games, and have struggled in others. However, today they combined for 10.6 between them … and this could have been more had it not been for inaccurate kicking.

Charlie threatened all day, and got his team off to a flier. Harry turned up in the last, kicking three final term goals to bring his tally to five. This is a significant weapon that the Blues possess, but I wonder if there is too much emphasis on these two that if they are both shut down (a tremendous challenge on par with eradicating the White Walkers from existence) the Blues will falter? When they are hitting the ball at speed and kicking goals, the Blues are fun to watch.

In terms of scores, it was 5.1 to 2.4 scores from stoppages in West Coast’s favour; 2.2 to 6.3 from turnover in Carlton’s favour at halftime. This is what got West Coast back in the game, but the second half showed that without this, there isn’t much the Eagles have by way of generating their forward ball movement and ability to score.

It also emphasises that when you find some dominance around the contest against the Blues, you can stifle their ball movement and pierce their defence – as emphasised by the incredible second quarter the Eagles put together.

Much is made about stoppages in today’s iteration of the game and in analysis. There are other facets worth exploring as well, but stoppage is important. If you can generate scores from stoppage or, at least, hold the majority of field position from this, you can control the game for extended periods which means setting it up how you want. We saw this in patches for both teams today.

When the Dam Wall Breaks …

For much of the game, the West Coast defence were holding up. Harry Edwards enjoyed some wins against Charlie Curnow, Shannon Hurn intercepted well, and the likes of Liam Duggan and Jamaine Jones helped to clear the ball. However, only for so long can a wall hold up. As we headed into the last quarter, the dam wall broke. The Eagles tried valiantly to resist, but the continuous attack from the Blues was too much and they were able to kick seven goals to none in the last.

With that said, and copping a ten-goal loss, the effort from the Eagles players – except for the last quarter – was high. There was Bailey Williams tackling Zac Fisher to win a holding the ball free kick. Rhett Bazzo ran down Jesse Motlop in the third quarter and saved a certain goal. There were few highlights, but they should be looked at, celebrated, and shown to the playing group to represent the effort required for four quarters.

Jacob Weitering returned and had 11 disposals. While he didn’t have much of an impact in terms of the game itself, he had three intercepts and, more importantly, got through his return. He is a vital cog in this Blues side and having him fit heading into September is key to how deep they can go.

Bailey Williams plays second fiddle to Nic Naitnui, but he had some great moments today. He led the match for intercept possessions in the first quarter, and competed all day. The more game time he gets, and the more confidence he gets in his ability, the better he will be.

We saw the best and the worst of Willie Rioli today. An incredible goal in the second quarter. It was out of nothing and rolled through. However, in the third, he lined up for goal, danced around the man on the mark, and then tried to kick a banana from 45 out straight in front that fell short. Sometimes it’s the simple things that work the best.

Speaking of the simple things … a handball sometimes is okay inside 50. In the first half alone, Blues players were caught three times HTB inside 50 having spurned the chance to handball to a teammate and try to score themselves; including Patrick Cripps. Sometimes, being selfish is the right call, at other times, not so much.

Tim Kelly had a great second quarter that was instrumental in the Eagles getting back into the contest. He gives his all and will be key to any rebuild the Eagles have going forward.

Tom de Koning, brother of Sam, played a great game, particularly early. His aerobic ability around the ground challenged Nic Nat in particular. He presents an additional aerial threat when pushing forward, and can be a great Get out of Jail marking option.

A shout out to Mister Kennedy for his exploits. In today’s game, he kicked his 700th goal in Eagles colours. He may have the best beard in the game, but he is also one of the great forwards of the generation. A legend of the game achieving a great feat today!

That’s all from Perth. The Blues end up with a dominant win, but they had to earn it. They now look ahead to a six-day break before a mouth-watering contest with ladder leaders, Geelong on Saturday night at the MCG. While the Eagles turn their attention to the Hawks in the early Sunday game also at the MCG.